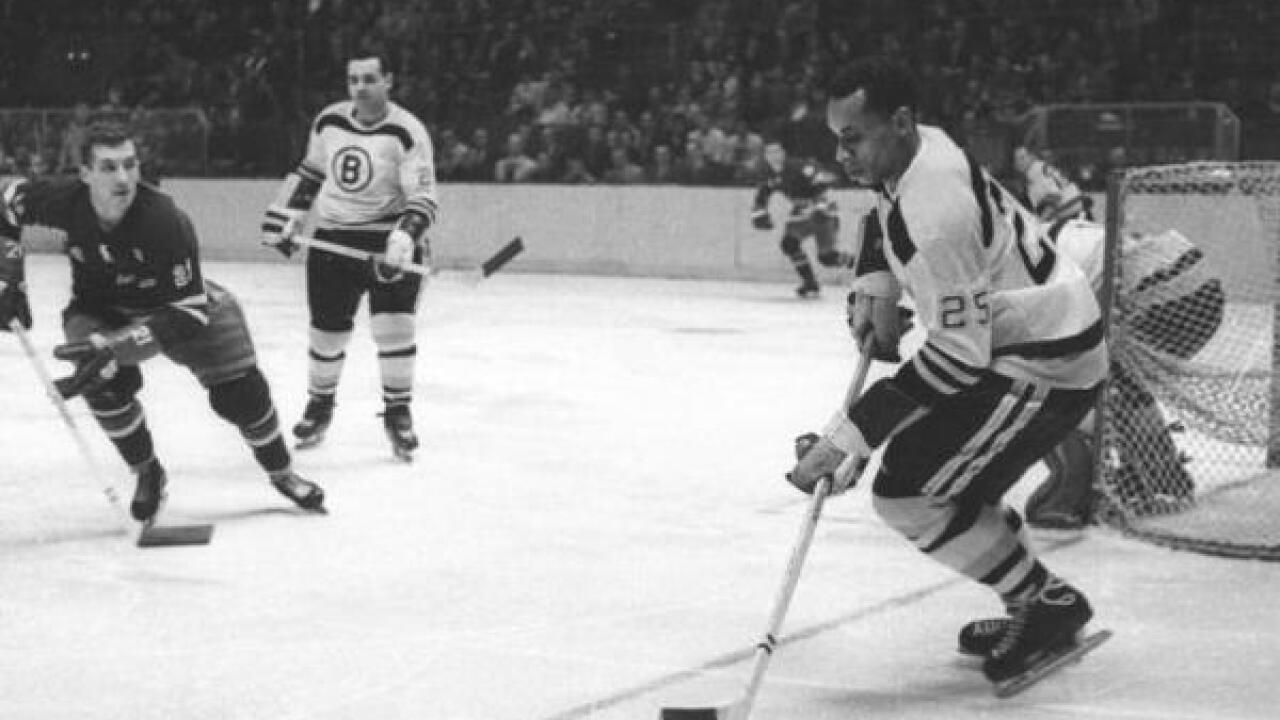 Copyright Getty Images
B Bennett
<p>NEW YORK, NY - 1961: Willie O'Ree #25 of the Boston Bruins skates with the puck as Camille Henry #21 of the New York Rangers looks defend during their NHL game circa 1961 at the Madison Square Garden in New York, New York. (Photo by Bruce Bennett Studios/Getty Images)</p>

Bettman has been commissioner since 1993, during which time the NHL has expanded its footprint across North America and increased to 31 teams. During Bettman’s tenure, the league has gone from a $437 million business to one with almost $5 billion in revenue.

O’Ree was the first black player in the NHL, but he will be the third inducted into the Hall of Fame, joining Edmonton Oilers goalie Grant Fuhr and Canadian women’s national team captain Angela James. O’Ree, a native of Fredericton, New Brunswick in eastern Canada, made his NHL debut in 1958 as a call-up for the Boston Bruins. The winger put up four goals and 10 assists in 45 NHL games during the 1957-58 and 1960-61 seasons despite being 95 percent blind in his right eye.

Now 82, O’Ree works for the NHL as diversity ambassador in the league’s “Hockey is for Everyone” initiative.” Sixty years after he broke the league’s color barrier, there are now about two dozen black players currently on NHL rosters.

Brodeur, 46, was a three-time Stanley Cup champion with the New Jersey Devils who was elected in his first year of eligibility as the goalie with the most wins, shutouts and games played in NHL history.

The Montreal native was the last real standup goaltender as the position moved almost exclusively to the butterfly technique, and his puck-handling prowess led the NHL to institute the trapezoid behind the net as a way to increase scoring.

In net, Brodeur has a league-best 369 wins and 125 shutouts in 1,266 regular-season games with the Devils and St. Louis Blues, and he won the Vezina Trophy four times. He won 113 playoff games and had a 2.02 postseason goals-against average. Brodeur also scored two regular-season goals and another in the playoffs – more than any other goalie.

St. Louis, 43, also was elected in his first year of eligibility. Undersized and undrafted, he won scoring titles in 2003-04 and the lockout-shortened 2012-13 season. He won the Hart Trophy as league MVP in 2004 as the Tampa Bay Lightning won the Stanley Cup. He also won the Lady Byng Trophy three times for sportsmanship.

Hefford played for Canada in five Olympics, winning four golds and a silver medal. She scored the winning goal in the 2002 Olympics.

Yakushev played for Moscow Spartak for 17 seasons and scored 50 goals in 42 games in 1968-69. He played in 144 games internationally for the Soviet Union, winning nine World Championships.