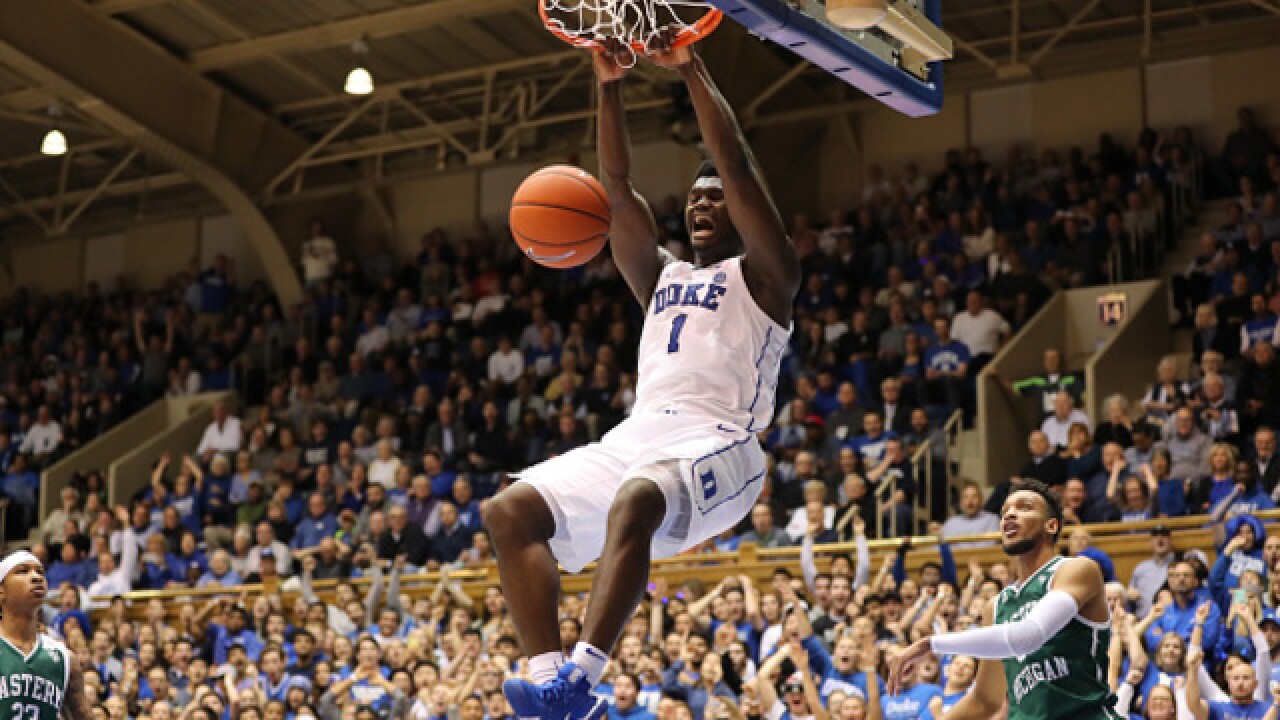 DURHAM, N.C. -- Zion Williamson tossed up an alley-oop lob for RJ Barrett, and on the next trip downcourt, Barrett returned the favor by setting up a dunk for Williamson.

For these high-flying Blue Devils, that No. 1 ranking sure seems to fit.

"It is great to be No. 1, but nobody really cares who's No. 1 right now," Williamson said. "The goal is to win a championship in March."

Javin DeLaurier and Jack White added 10 points apiece for the Blue Devils (3-0). Playing two days after leapfrogging Kansas for the top spot in the AP Top 25, they looked every bit the part of a top-ranked team.

They shot 47 percent, turned 20 turnovers by the Eagles into 31 points and took command with an early 21-1 run keyed by an assortment of dunks by Williamson.

Damari Parris had nine points to lead outmanned Eastern Michigan (3-1), which shot 31 percent and was stuck in single-digit scoring for about 17 1/2 minutes.

Unlike their last game -- in which Army hung with them for about 30 minutes three days earlier -- the Blue Devils took the drama out of this one early.

"Everything we did kind of worked," coach Mike Krzyzewski said, "but the reason it worked is because we played so hard."

Williamson put Duke up by 20 for good midway through the first half with the highlight of the night -- leaping so high to pull in a seemingly errant alley-oop pass that his armpits were even with the rim before he dunked -- and Barrett made it a 30-point game with a bucket with about five minutes before halftime.

"The atmosphere got the best of us the first 6-7 minutes of the game," Eastern Michigan coach Rob Murphy said. "It was a struggle for us to score in the first half, and once you get down in this building ... it's pretty hard to come back."

Eastern Michigan: Not surprisingly, the Eagles threw a 2/3 zone defense at the Blue Devils -- Murphy spent seven years on the Syracuse staff with zone savant Jim Boeheim. It wasn't much of an impediment to the nation's top-ranked team, though that seems insignificant in the long run because nobody in the Mid-American Conference will match Duke's talent level.

Duke: Being No. 1 is nothing new for the Duke program -- the Blue Devils started the two previous seasons in the top spot -- but it's a new experience for these freshmen. Not that they seem affected in the slightest. Williamson has scored at least 20 points in all three games while making 32 of his 39 shots.

Krzyzewski says 3-point-shooting threat Cameron Reddish was dealing with soreness in his groin but "nothing serious" and would have played more had the game been closer. Reddish finished with three points on 1-of-5 shooting in less than 12 minutes.

PLAY OF THE NIGHT

There were lots of choices, but the best of the bunch came midway through the first half when Reddish lobbed an alley-oop pass from just across midcourt that seemed headed for the seats. Williamson skied so high for it that his armpits and eyes were both at rim-level. That highlight-reel jam made it 28-7, putting Duke up by 20 for good.

STATS OF THE NIGHT

By the time Duke led by 20, Williamson had more dunks (four) than Eastern Michigan had field goals (three). ... The Eagles led for 18 early seconds -- when it was 2-0 -- and that brought the total amount of time the Blue Devils have trailed this season to 30 total seconds.