Hurricane Michael will be dangerous when it hits US coast Wednesday 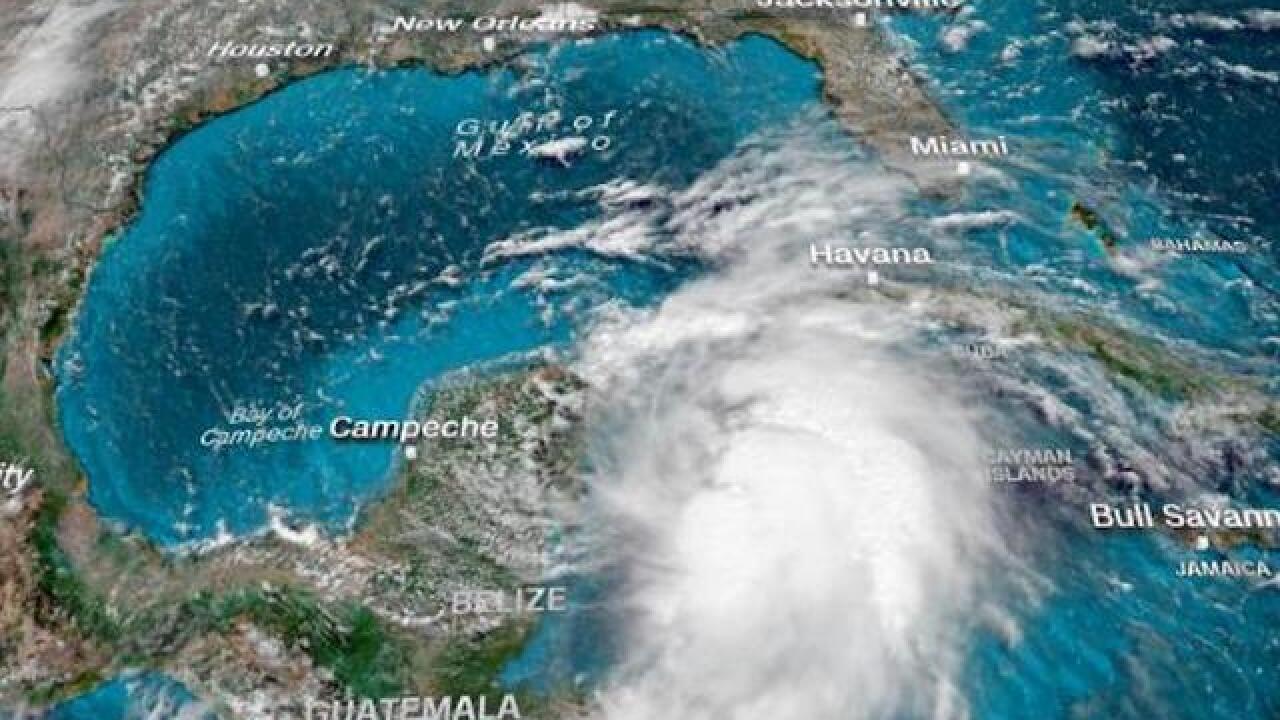 © 2018 Cable News Network, Inc.
CNN
<p>Tropical Storm Michael formed near the Yucatan Peninsula and is on track to hit the United States.</p>

Michael, now a Category 1 hurricane slashing Cuba, is forecast to be a "dangerous major hurricane" when it smacks the US Gulf Coast on Wednesday, the National Hurricane Center said.

The forecast indicates Michael may be a Category 3 hurricane -- with winds from 111 to 129 mph -- when it strikes.

"Life-threatening storm surge is possible along portions of the Florida Gulf Coast regardless of the storm's exact track or intensity," the center said. "Well-built framed homes may incur major damage or removal of roof decking and gable ends. Many trees will be snapped or uprooted, blocking numerous roads. Electricity and water will be unavailable for several days to weeks after the storm passes."

Floridians scurried to prepare after Gov. Rick Scott declared a state of emergency for 26 counties and activated 1,250 National Guardsmen for hurricane duty.

"Heavy rainfall from Michael could produce life-threatening flash flooding from the Florida Panhandle and Big Bend region into portions of the Carolinas through Thursday," the hurricane center said.

Michael has undergone a period of "rapid Intensification" -- defined as an increase of sustained winds of 35 mph in a 24-hour period. The storm went from 40 mph on Sunday to 75 mph on Monday and is expected to undergo rapid intensification again in the next 24 hours.

The storm is aiming at a region that stretches from Mobile, Alabama, through the Florida Panhandle and into the Big Bend area of northern Florida.

A hurricane warning from the National Weather Service was declared for the Alabama-Florida border to the Suwannee River in Florida. A warning means that hurricane conditions are expected somewhere within the designated area, and warnings are typically issued 36 hours before tropical-storm-force winds are expected, the weather service said.

Storm and storm surge watches were issued for the Gulf Coast from the Mississippi-Alabama border to Chassahowitzka, Florida, north of Tampa Bay.

As forecast, Michael would be the first Category 3 or higher hurricane to hit the Panhandle since Hurricane Dennis in 2005. Monday, it became the seventh hurricane of 2018 in the Atlantic Basin. On average, the Atlantic would have about five hurricanes by October 8.

'Everybody's got to get ready'

Scott warned that Michael could reach land as a Category 2 hurricane, with winds in excess of 100 mph.

"This storm will be life-threatening and extremely dangerous," Scott said at a press briefing.

"This storm has the potential to bring devastating impacts to communities across the Panhandle and Big Bend and every family must be prepared."

Scott activated 500 National Guard troops in advance of the storm.

"Everybody's got to get ready. Don't take a chance," he said. "We're going to get storm surge, we have wind, we have a chance of flooding, we have a significant chance of tornadoes."

Voluntary, and in some cases, mandatory, evacuations were issued in some areas along the Florida Panhandle coast.

In Alabama, Gov. Kay Ivey issued a statewide state of emergency in anticipation of damage from Hurricane Michael. The governor's declaration activates the state's emergency operations plan, according to Ivey's office.

In the Caribbean, a hurricane warning is in effect for the Cuban province of Pinar del Rio. Tropical storm warnings are posted for the Isle of Youth in Cuba and the coast of Mexico from Tulum to Cabo Catoche, including Cozumel.

"Hurricane conditions will spread over portions of western Cuba this afternoon, where a hurricane warning is now in effect. Tropical storm conditions are expected over the northeastern Yucatan Peninsula and the Isle of Youth today," the center said.

"Michael is expected to produce heavy rainfall and flash flooding over portions of western Cuba and the northeastern Yucatan Peninsula of Mexico during the next couple of days."

The storm was expected to brush the westernmost province of Pinar Del Rio, where most of Cuba's famed cigar tobacco is grown, before continuing north to the United States.

According to an alert published by the Cuban Civil Defense, meteorologists warned affected residents that they could experience hurricane-force winds. Officials also alerted residents living on the coast of the possibility of flooding caused by the storm.