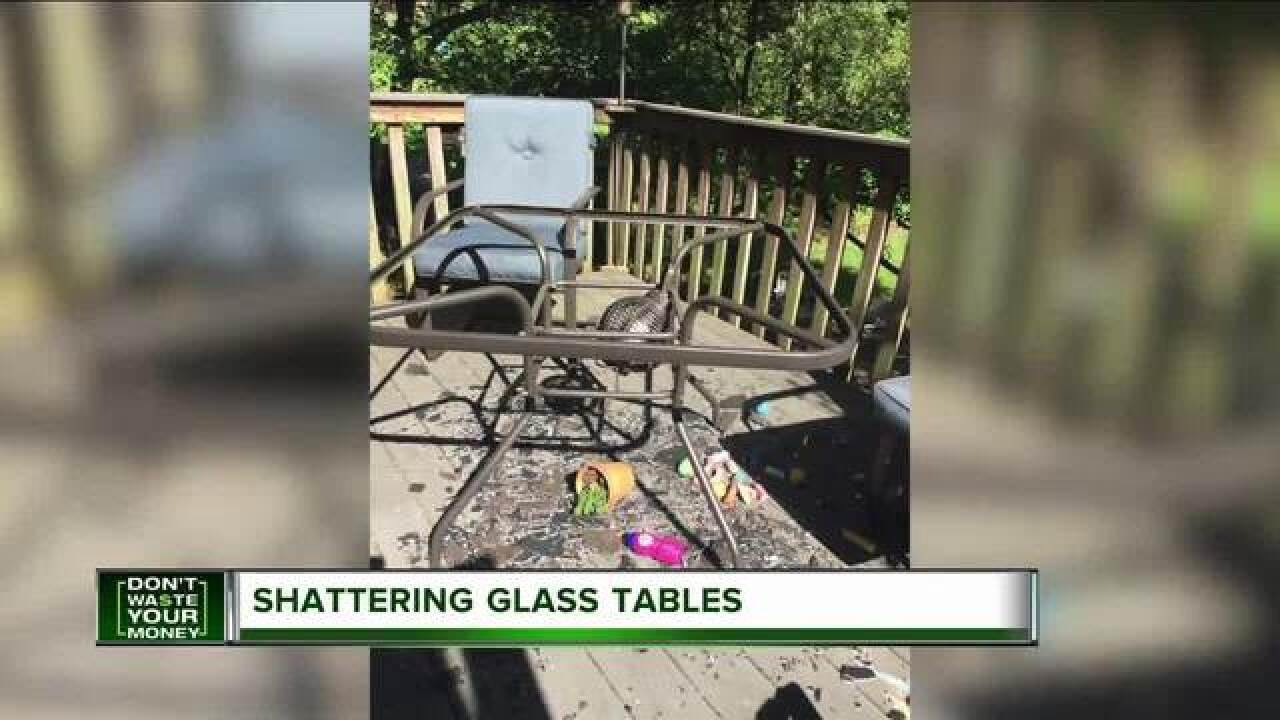 A family says they feel so lucky their preschool children weren't hurt when their glass patio table shattered without warning.

These glass tables, sold at many discount and big box stores, are inexpensive and popular. But could they have a downside?

Shatters with no warning

Andrew Wilson looked at what remained of his glass patio table, after it spontaneously shattered on the first hot day of the year.

"I just heard an explosion," he said. "And I looked down and I see there is glass everywhere."

Mom Christine Wilson is thankful her two young children were not playing on the backyard deck when it happened.

"It just exploded," she said. "The glass was popping like crazy even afterwards. Thankfully, no one was outside. My daughter had been outside an hour beforehand."

"There weren't any reviews on the chairs not being nice, anything like that. It was all 'the glass exploded.' And I was shocked," she said.

Glass tables have pros and cons

Glass patio tables are very popular because they are lightweight, affordable, and easier to keep clean than  metal tables. You can often find a set for sale outside a grocery or discount store for under $300.

But that tempered glass can have a downside, no matter what brand.

Glass installer Gary Orman told our sister station WFTS-TV that he sees shattered glass all the time, and says the experts say temperature changes appear to be the cause in most cases.

"It's pretty common in the industry," he said.

In 2011, Kmart stopped selling Martha Stewart glass patio tables after shattering complaints, though there was no recall.

Reports say that with patio tables, any pressure on the side of the glass can cause shattering, such as an umbrella pole blowing in the wind, or the glass trying to expand in the hot sunlight, but then getting squeezed by the table frame.

Patio tables make up just a fraction of complaints, however. The Consumer Product Safety Commission has hundreds of complaints about tempered shower doors, desks and glass cabinets all breaking without warning.

But Orman says tempered glass is very safe, as a demonstration showed.

While the standard "plate" glass shattered into large sharp pieces, the tempered glass broke into thousands of tiny pieces, less likely to cut you. It's scary to see, but safer this way.

A spokesman for Canadian-based Courtyard Greations, John Greenberg, told us that out of well over 10,000 glass patio tables they sell each year, they receive, at most, "just two or three complaints" of shattering.

The Wilsons realize the risk is very low, but are going to avoid glass next time.

"I still wouldn't think that a table would explode from it being hot outside," Andrew Wilson said.

However, Courtyard Creations agreed to refund the Wilson's money after we got involved.

So how can you protect your family? The industry insists glass tables are safe, and the government has declined to order any recalls.

However, if you are concerned, you may wish to consider a sold wood or metal patio table, where there's no risk of sudden shattering.