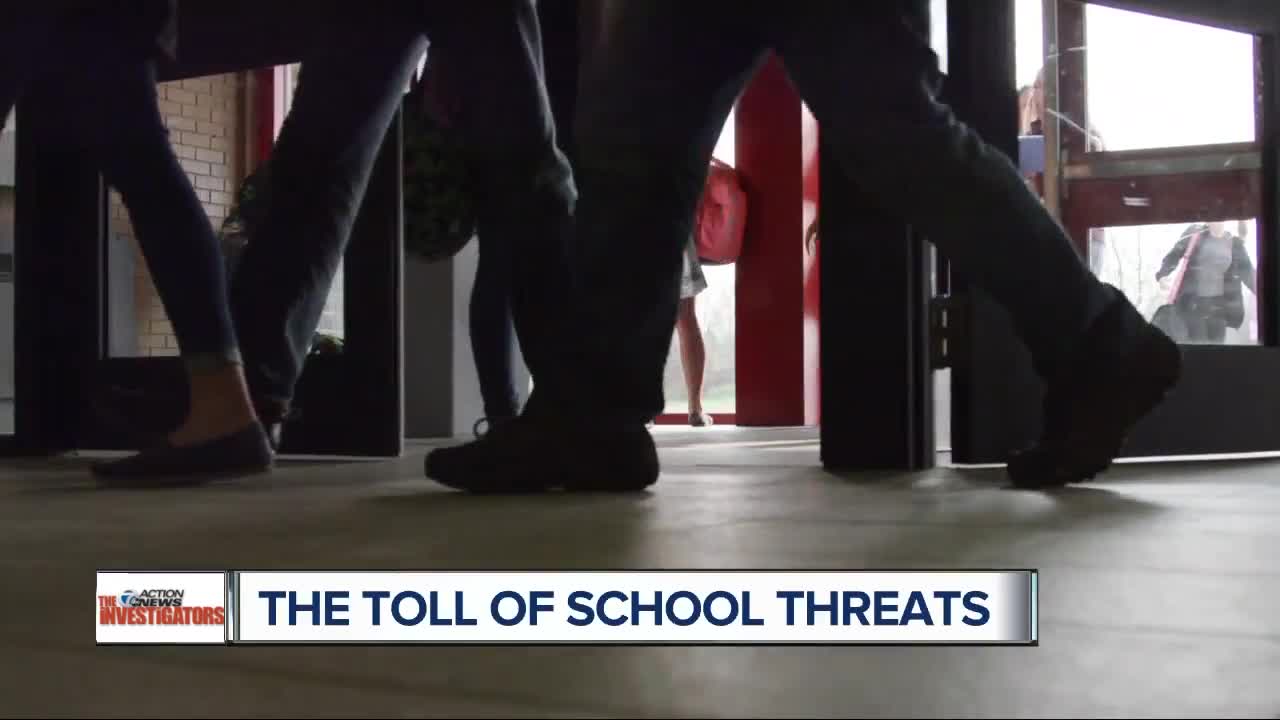 Many local students have been charged with felonies just for making a threat against their school, even if they were only joking. 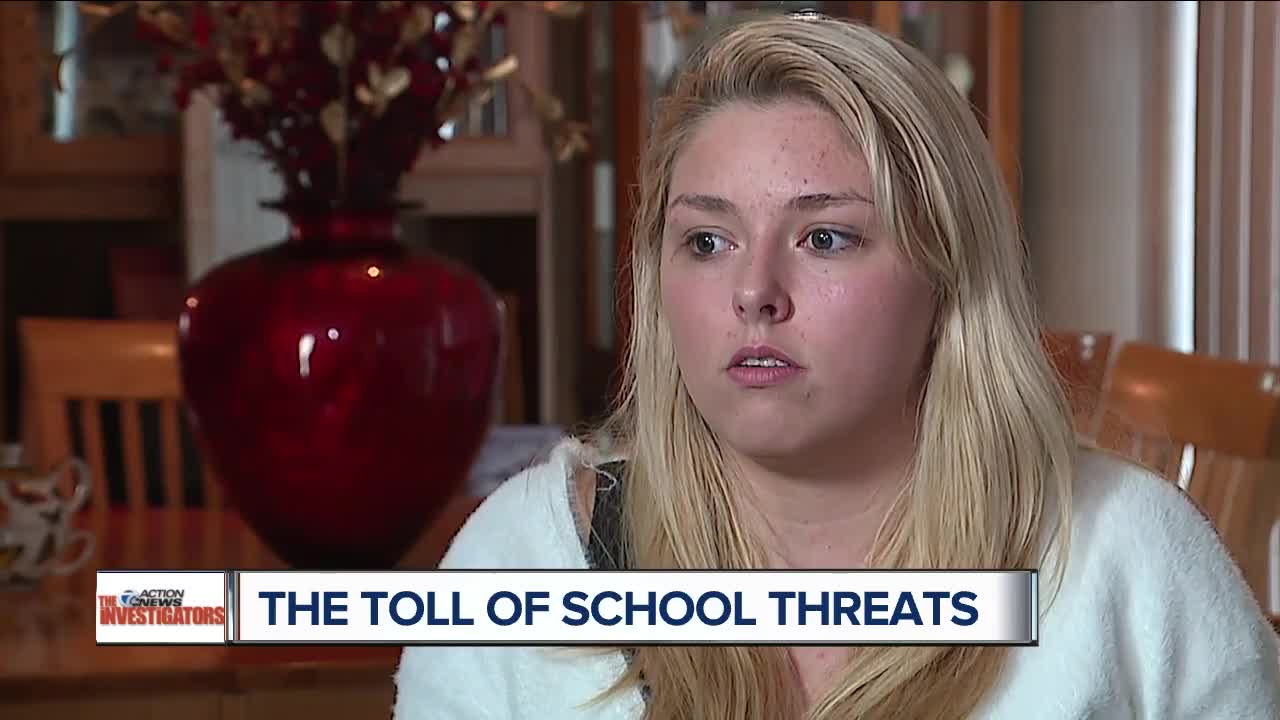 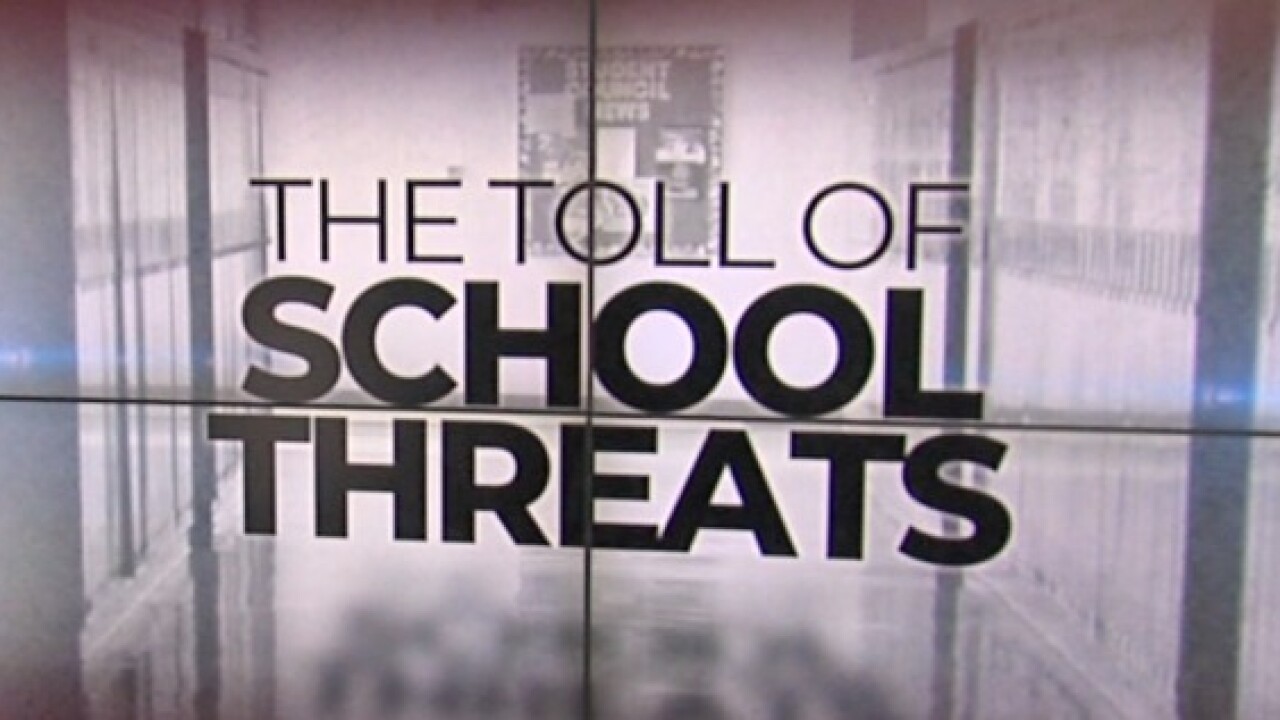 Many local students have been charged with felonies just for making a threat against their school, even if they were only joking.

So far in 2018, at least 165 people have been charged with making school threats in southeast Michigan. Prosecutors say they’re not willing to take a chance on who’s being serious about bringing a gun to school, and who’s not.

Heavenly Frederick used to think of herself as a pretty typical 16-year-old. She enjoys competing in beauty pageants, doing school projects and she’s already earning her cosmetology license. So, what had this normally bubbly teenager considering suicide this past year?

“This changed my life,” Heavenly said.

In March, Heavenly found herself being interrogated by sheriff’s investigators, placed on a tether and now she’s working her way through a special probation for juveniles.

Heavenly says about a month after the Parkland Florida school shooting, she was having a Second Amendment debate with some friends at her Macomb County high school.

But according to their written statements, her classmates heard something else.

One girl wrote they were “having a political discussion” and towards the end of the conversation, Heavenly said, “I’m going to bring an AR-15 to school and shoot you all.”

The girl went on to say that it was said “100 percent sarcastically, and she did not mean it on any level.”

“It was around 6 o’clock at night and I got a knock at the door," said Karen Frederick, Heavenly’s mom. "And I opened it and I see all these Sheriff officers. They said we got a report today that Heavenly threatened to shoot up the school. I was totally beside myself.”

Karen says she was devastated when Heavenly was charged with a 20-year felony for false report or threat of terrorism.

Detectives found nothing in Heavenly’s phone or computer, no social media posts and no physical evidence of the threat; there was just her word against three classmates.

“We’re not looking to make an example of anyone. What I’m looking to do is ensure the safety of our schools, plain and simple,” said Macomb County Prosecutor Eric Smith.

He added that his office has issued school threat charges in 70 cases so far this year.

“I can’t decide which one is real and which one is not real," Smith said. "I can’t say, well, we’re not going to prosecute cause we’re not sure if you meant it. Then where do I draw the line? When the next kid says to the teacher, I’m going to bring a gun to shoot you – well, do we charge that one, or is that free speech."

Karen says as a single mom, she could not afford to fight the charges. When their court-appointed attorney got Heavenly onto something called the juvenile court Consent Calendar, Heavenly accepted responsibility in exchange for the case being dropped if she successfully completes probation.

“She was given the least possible sentence because she made a dumb mistake," Smith said. "But once again, I don’t know and the sheriff doesn’t know, and the school districts don’t know which one of these is going to be the real one. And I’m not going to take the chance."

Karen says the threat of getting locked up had Heavenly so depressed, she attempted suicide twice.

“Emotionally, with my daughter being in the hospital and almost losing her, that’s something I never want to go through,” Karen said.

“It’s so traumatic to never have experienced anything like that before – that whole process is so dehumanizing and it’s also really, really scary," said clinical psychotherapist Tracey Stein. "And I don’t know that they have any tools to deal with that."

Stein says as parents, we need to be very blunt with our kids about what they can and can’t say at school or on social media. That conversation needs to happen immediately, she added.

“I think this is something that we need to say to our children – you can’t say these things," Stein said. "It’s like going into an airport with children and being like you cannot say bomb in an airport, right? It’s not all that different, where we say this is not a threat you can make and if you make this threat, you’re going to be punished. And you could potentially be arrested and put in handcuffs and put in front of a judge and there may be nothing I can do for you. There’s nothing wrong with scaring them a bit, too, so that they can fully understand that this is not a joke.”

•    Find out what they know already and let their questions be your guide. This will help keep the conversations age appropriate.

•    Do not be afraid to share your own fears and feelings. It is very important that children know that they are not alone.

•    Validate and Normalize their feelings.  "It is okay to feel scared."

•    Try to reassure a sense of control; reminding children of measures schools are taking to keep them safe such as lockdown drills, always keeping external doors locked.

•    Remember that this is the start of many conversations so don't feel pressured to get it "right" the first time. In fact, there is no "right." You know your child better than anyone else in the world and as they evolve your conversations will as well.

•    Don't be afraid to seek out resources to help guide you in these conversations. The National Education Association may be a good place to start.  http://www.nea.org/