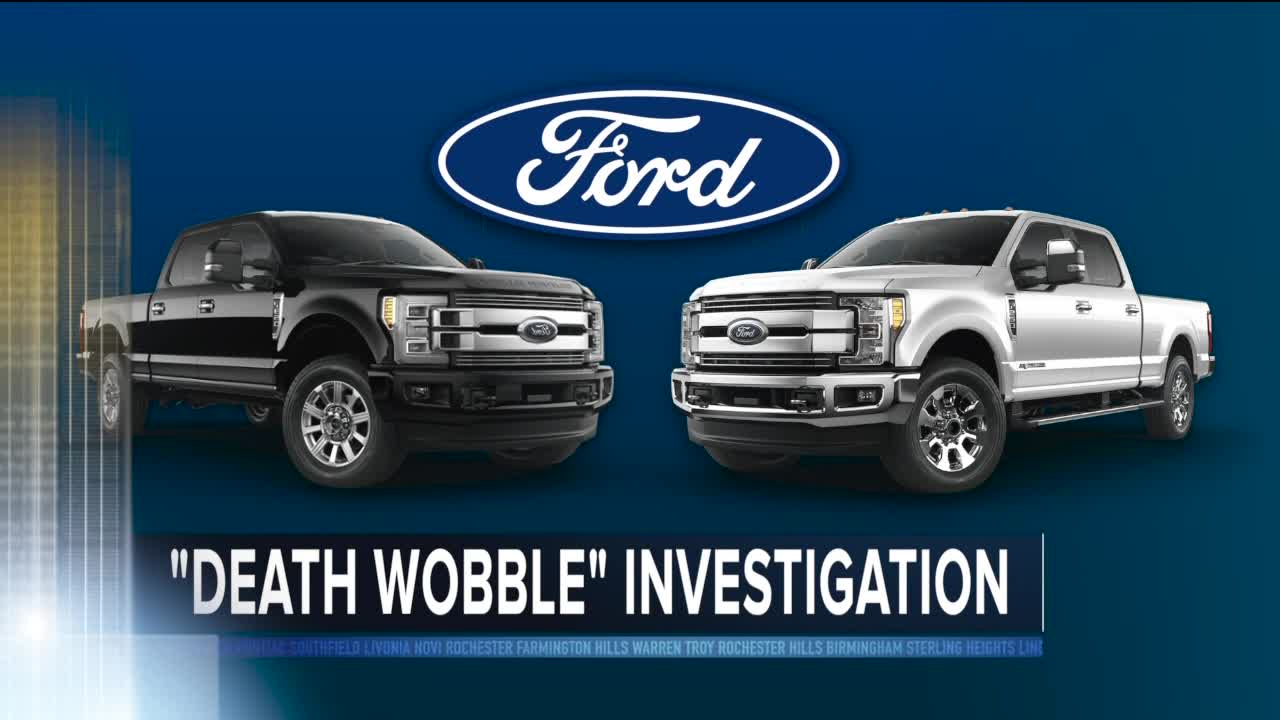 It's scary to even think about. Driving on the freeway, and suddenly the front end of your vehicle starts violently shaking as you lose control of your steering.

(WXYZ) — It's scary to even think about. Driving on the freeway, and suddenly the front end of your vehicle starts violently shaking as you lose control of your steering.

Some Ford F-250 and F-350 Super Duty truck drivers are calling the experience the "Death Wobble." Although no fatalities have been reported due to the alleged defect, more than 1,200 current or former Ford drivers have filed complaints with the federal government about the issue.

One of those people is metro Detroiter Bob Phillips.

“It just starts shaking violently. The truck shakes and vibrates," he told 7 Action News of his 2017 F-350 truck, which started having problems about six months after he bought it.

For Phillips, and for hundreds of other Ford consumers who filed complaints with the National Highway Traffic Safety Administration, the violent shaking seems to only stop when the truck is drastically brought down in speed, sometimes to as low as 20 miles per hour which, on the freeway, can pose a serious safety risk.

Phillips experienced the so-called "Death Wobble" on his interview while driving on M-53. He said it feels like he's rolling the dice every time he drives the truck, unsure of whether it will shake violently on the freeway or not.

“You have to slow down as quick as you can and get off onto the shoulder of the road. Without hopefully getting hit or causing an accident," Phillips told Action News.

He's reported the concerns to his dealership, but so far hasn't received a concrete answer or seen the problem fixed. He's hoping to join a class action lawsuit filed in June in California against the auto giant.

The lawsuit is on behalf of several current and former Ford drivers with F-250 and F-350 trucks from model years 2005 through 2019, all reporting the same problem as Phillips.

“The complaints are replete with customers who have paid thousands of dollars trying to get rid of this problem. You have a vehicle going at freeway speed. When this shaking starts, there’s no way to get the shaking to stop," said attorney David Wright via Skype.

Wright is with the McCune Wright Arevalo LLP law firm representing the plaintiffs in the Class Action, which claims that Ford knew about the alleged defect and despite the more than 1,200 complaints to NHTSA, has not issued a recall.

A quick search of that database, and you'll find hundreds of complaints just like Phillips', from drivers all around the country.

There's now even a Facebook group where drivers share their experiences, post videos and share advice on how to file a complaint, what to do when you take your truck into a dealership, etc.

Phillips joined the group a few weeks ago when he started doing his own research on the alleged "Death Wobble."

"This will be a challenge to Ford’s new management. We saw a reshuffling in recent weeks of senior management," said auto industry expert John Boyd via Skype. "It will really put Ford’s senior management and communications team really on the clock, to get ahead of this and to be proactive."

Other than filing a complaint with NHTSA and continuing to bring his truck back to the dealership for work covered under his warranty, Phillips isn't sure what to do next.

"I’ve got a $60,000 truck that my 19-year-old daughter refuses to drive because she doesn’t feel safe in it. She’s worried that if she’s driving it, it’s going to happen," he said.

Wright found more than a dozen reported injuries associated with "Death Wobble" complaints and more than 80 cases of a driver losing control of their F-250 or F-350 truck while on the road.

We reached out to Ford for a comment on our story and received the following response from a Ford spokesperson.

“We typically do not comment on pending litigation. However, we advise customers to contact their dealer or the Ford Customer Relationship Center at 1-800-392-3673 if they have a concern.”

"Ford has told its consumers either directly or through its authorized dealers or a myriad of explanations for this problem. Tires, tire pressure, tire balancing and rotation, wheel alignment, etc," Wright said. All explanations he claims aren't adding up.

Phillips said when he first brought his truck in for work, he was told it was an alignment issue.

“I went to the dealer, reported it, they had it for several days, adjusted the front end alignment and their solution at that time was not to drive it on roads that are rough," he said. "It’s just a matter of time I think before something bad happens."

If you think your F-250 or F-350 Super Duty truck may be affected, you should file a complaint with NHTSA.

Boyd suggests that Ford consumers also take steps to join the Class Action lawsuit if they feel they meet the criteria, and check out Carcomplaints.com as a resource that offers comprehensive data on past and current issues reported with vehicles.

If you bring your truck to a dealership or a mechanic, keep all receipts and paperwork associated with the work, even if it's not under warranty.