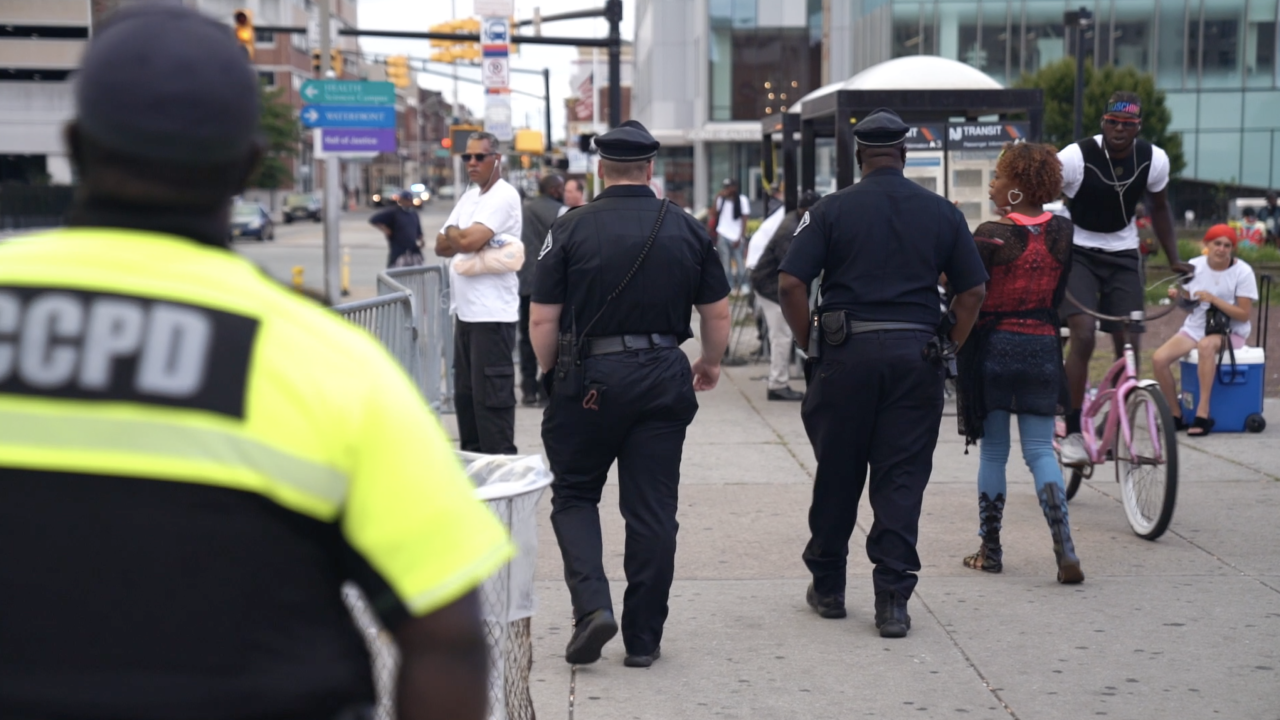 CAMDEN, N.J. -- Lieutenant Gabriel Rodriguez is a part of the Camden County Police Department, a department that started over from scratch seven years ago.

“East Camden is actually an area I grew up in. I was born and raised out there. Very familiar territory for me. A lot of my cuts and scratches and bumps out there, a lot of good memories,” Lt. Rodriguez said.

Back in 2011, then-Mayor Dana Redd says Camden was confronted with a fiscal and public safety crisis that led them to lay off more than half of the Camden City Police Department.

“We were facing a $26 million deficit in fiscal year 11 and looking for ways not only to balance the budget, but to certainly provide for the safety and protection of our citizens,” Former Mayor Dana Redd said.

Lt. Rodriguez was part of those layoffs.

He wasn’t so sure the transition was a good idea, but then he says he saw a culture change as the new police force was required to be more community driven -- getting out of their vehicles and interacting with the people of Camden.

“I received my first thank you in my entire career when I was out on my walking beat as a Camden County Metro police officer. I’ve never heard that before… ‘thank you for your service,’” Lt. Rodriguez said.

The process of creating the new model took about two years. Redd says the city hired a consultant and had conversations with stakeholders and representatives from 19 diverse neighborhoods in Camden. As mayor, her intention was to establish a system that would reduce the number of crime victims and help people feel safe.

“In my mind and my opinion is that public safety is not just about enforcement. It’s prevention, it’s intervention programs that you have available for children, youth and families, and it’s also reentry programs for individuals who have been formerly incarcerated who are returning home to communities like Camden, New Jersey,” Redd said.

Redd says there was a lot of support for the changes, but there was also a lot of pushback. And some residents say they still haven’t witnessed major changes with the new system -- like Keith Benson, who was born and raised in the area. He’s also the president of the Camden Education Association.

“If you’re a community police department, you should be required to live where you’re serving,” Benson said.

Benson says he'd like to see residency requirements for officers be reestablished. Data from the U.S. Census Bureau show more than 90% of Camden identifies as either black or Latino - and Benson says he believes the police force should mirror that. Right now, about half the force is white. However, Benson says more needs to be done to have an effective and trustworthy police force. He says going out into the community is part of it, but actually being a friendly member of the community and looking non-threatening is another.

“When you recognize – you know you have access to social media – you see cops killing people and you see this big gun hanging on this cop’s hip that at any moment they can reach on you. That makes you feel a certain way as a civilian. Specifically, if you’re a person of color in a neighborhood like this,” Benson said.

George Floyd’s death has put the topic of police reform in the spotlight.

“We’re not law enforcement officers, we’re public servants. Our job is not just to enforce the law, it’s to serve the people," Lt. Rodriguez said. "And to see someone murdered by that person that took that oath is very sickening and disgusting. And it hurt me as a person – not as an officer – as a person it really hurt me to see that happen because I have brown skin and that could have been me. I get pulled over by police and get treated a certain way until they find out I’m a police officer.”

David M. Kennedy is a professor of criminal justice at John Jay College and the Director of the National Network for Safe Communities.

“When it comes to policing and public safety, I really think the world just changed,” Kennedy said.

Kennedy says he’s been paying close attention to the Camden situation for quite a while, and he thinks it’s time for other places across the U.S. to consider a change.

“People are not going to tolerate the kind of policing that many of them have been having,” Kennedy said.

Even though Former Mayor Dana Redd says the restructuring of police was mostly a financial decision, the nation is now looking to it as a potential blueprint for community-based policing.

“What Camden did, do you think that would be a good step for Minneapolis moving forward?” Reporter Elizabeth Ruiz asked.

“That’s a question for the people of Minneapolis," Kennedy said. "If it’s going to be legitimate, it has to be welcome and authentic in the eyes of the public.”

Kennedy says in order to defund and disband a police department and build something new, law enforcement has to gain people's trust.

“Institutions that have done harm need to acknowledge that harm. They need to be honest about it. They need to engage with those who have been harmed in a way that those people find authentic,” Kennedy said.

Lt. Rodriguez says he stands with those who feel hurt and violated by the death of George Floyd.

He says he believes in the system they’ve created in Camden and hopes police officers all over will work harder to connect with the communities they serve.

“We’ve worked so hard with the community to build that trust and that confidence," Lt. Rodriguez said. "That they can reach out to us that their voices are being heard. When something so unfortunate and so terrible happens like it did to Mr. Floyd, it really stains the badge.”