AP College Football Poll: Michigan moves to No. 6; Michigan State at No. 24 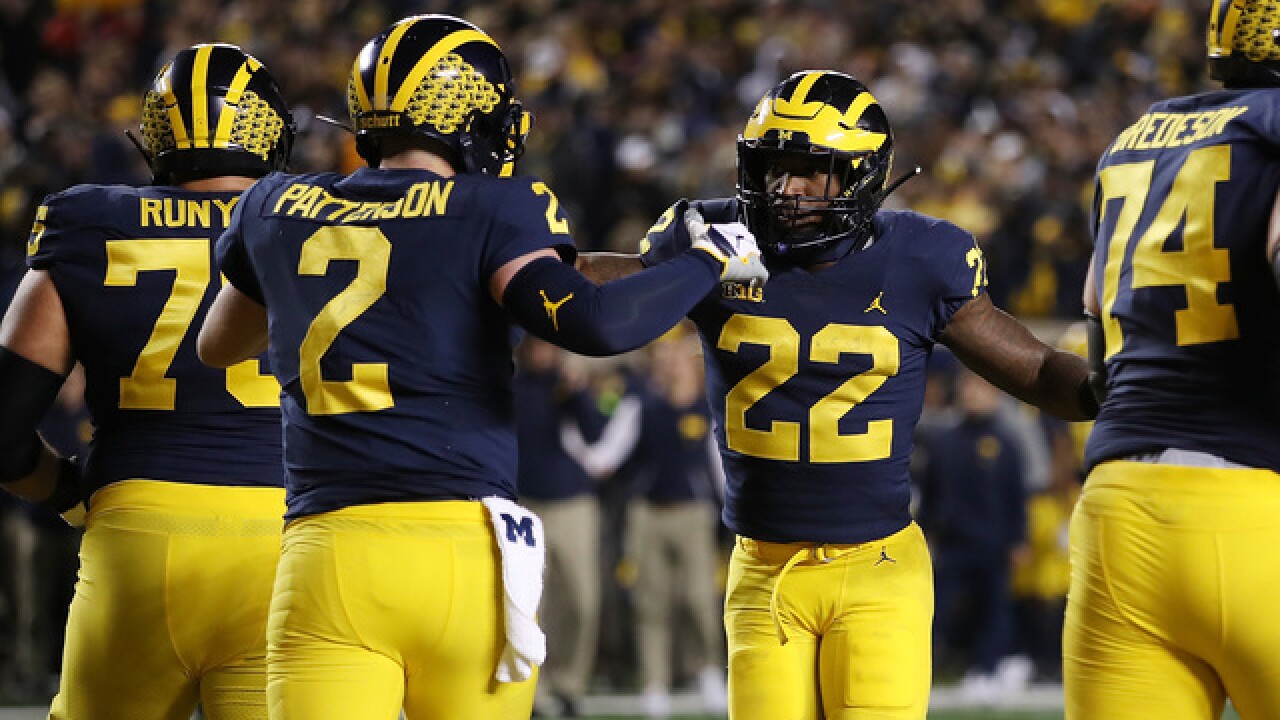 After four of the top eight teams lost, The Associated Press college football poll had a new look behind No. 1 Alabama, with Ohio State reaching No. 2, LSU jumping back to No. 5 and Michigan moving into the top 10 for the first time this season.

The Crimson Tide received all but one of the 61 first-place votes from the media panel Sunday, with Ohio State receiving the other. No. 3 Clemson and No. 4 Notre Dame also moved up a spot. LSU jumped eight after handing Georgia its first loss of the season. The Bulldogs slipped from No. 2 to No. 8.

No. 6 Michigan has its best ranking of the season after blowing out Wisconsin and Texas is up two spots to No. 7.

No. 9 Oklahoma moved back into the top 10 while it was idle and Central Florida remained No. 10.

All the losses up and down the rankings meant plenty of movement. Joining LSU and Michigan as teams that gained at least four spots were:

— No. 12 Oregon jumped five after beating Washington in overtime. The Ducks have their best ranking since September 2015.

— No.  17 Texas A&M moved up five after edging South Carolina on the road.

— It was a good week to be idle and watch teams plummet. No. 14 Kentucky and No. 16 North Carolina State each gained four spots in an idle week, and No. 20 Cincinnati moved up five.

— No. 15 Washington dropped eight spots after losing at Oregon.

— No. 23 Wisconsin, which started the season ranked fourth, dropped eight spots after its second loss.

— Colorado reached No. 19, racking up wins against a weak schedule, but USC manhandled the Buffaloes in Los Angeles and now they are unranked.

— Miami, which started the season at No. 8, is out altogether after losing at Virginia.

— Auburn, which started the season ninth, is out and no longer receiving votes after getting beat at home by Tennessee and falling to 4-3.

— Iowa surged into the rankings for the first time this season at No. 19.

— No. 25 Washington State moved in just in time to host ESPN's "College GameDay" for the first time ever with Oregon coming to town. Getting to Pullman, Washington, is notable for the show because for years it has been followed around by Wazzu fans waving the 'Ol Crimson school flag.

A week after the Southeastern Conference placed a season-high eight teams in the poll, the SEC lost one and the Big Ten gained two. The ACC has only two ranked team for the first time since Oct. 4, 2015, when Clemson was No. 6 and Florida State was No. 12. The Tigers played for in the national championship game that season.

No. 16 North Carolina State at No. 3 Clemson. The ACC's only ranked and unbeaten teams meet in a game that will likely go a long way toward settling the Atlantic Division.

No. 22 Mississippi State at No. 5 LSU. This will be the fourth ranked team the Tigers have faced —  though two (Miami and Auburn) are no longer.

No. 6 Michigan at No. 24 Michigan State. Another chance for Jim Harbaugh and the Wolverines to flipped the narrative.

No. 12 Oregon at No. 25 Washington State. The Ducks look to make it an Evergreen State sweep.
___
___
Follow Ralph D. Russo at www.Twitter.com/ralphDrussoAP and listen at https://www.podcastone.com/AP-Top-25-College-Football-Podcast
___
More AP college football: https://apnews.com/tag/Collegefootball and https://twitter.com/AP_Top25