As Democrats debate in nearby Detroit, a deep-seated distrust remains in Flint 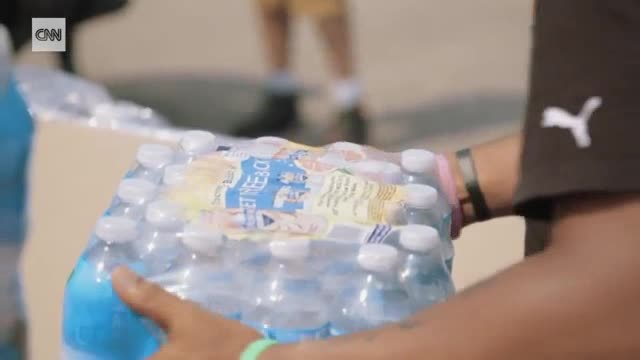 At another church, the pastor only performs baptisms with bottled water.

Every Thursday, a line of cars stretches for more than a mile down Dort Highway, as Flint residents wait hours for bottled water because they are afraid to drink from their faucets.

It's hard to grasp the distrust that forms when people fear the water that comes from their tap could make them ill -- or worse.

But every day, residents of Flint are reminded that, despite the declarations from the state of Michigan and the Environmental Protection Agency that their water is safe, the city's man-made crisis is far from over -- more than five years after it began.

As presidential candidates debate on CNN in nearby Detroit this week -- and make campaign stops and host town halls in Flint -- their visits are bringing new attention to a city that many residents say feels forgotten.

"We are so sick of politicians traipsing in and out of here for their political campaigns thinking that they're going to highlight our community -- as if that's going to do anything -- and then traipsing right out of here," said the Rev. Monica Villarreal, the pastor at Salem Lutheran Church who still only uses bottled water to perform baptisms. "It is not about partisan politics -- it is about who is going to come get the job done."

Some welcome the return to the public eye. But many people in Flint told CNN they are doubtful that politicians will solve their problems.

Flint's water problems can be traced back to 2014, when city and state officials switched the city's water supply in an effort to cut costs. That decision exposed residents to dangerously high levels of lead, and led to more than a dozen lawsuits filed against those involved.

Since 2017, the city of Flint has worked to inspect and replace water lines for at least 18,000 homes.

But even if every contaminated water line is replaced, which officials say should be complete this year, rebuilding the trust that was fractured could be Flint's biggest challenge.

And it's unclear how -- or if -- that trust can ever be repaired.

'It's just made my life a mess'

It's a steamy Thursday in late July and by 9 a.m., the shoulder of Flint's Dort Highway and a nearby side street are already lined with cars parked bumper to bumper.

Many drivers and their passengers look tired, and understandably so. They are waiting in line for donated bottled water, which is distributed by a local church.

Some, like Alander Baldwin, whose red Chevrolet truck was near the front of the line, have been here since 5:30 a.m.

"I could be fishing or cutting my grass or doing something worthwhile, but I gotta come out here and get water and food," said Baldwin, who's lived in Flint since 1955. "It's just made my life a mess."

Others, like General Motors retiree Kenneth Hairston who pushed a shopping cart to transport his water, prefers to skip the line by walking, even though the journey from his house and back is four miles.

It's a scene you might expect to see after a natural disaster.

But it plays out every Thursday at Flint's Greater Holy Temple Church of God in Christ, just a mile and a half from the city's water treatment plant, where the water problems first began in 2014.

The church is one of a few remaining centers that still distributes donated bottled water to Flint residents, after the state of Michigan stopped providing free bottled water more than a year ago.

Hairston and Baldwin say they need the water because they do not trust that what comes out of their taps is safe to drink. It's a sentiment shared by many we spoke with in Flint, who say their lives are still consumed by the contamination of the city's water supply.

Lloyd Mayes, a Flint native who works in corrections, raised his family here but is glad that his grown children have moved, even though it means he rarely gets to see his grandchildren.

"I'm kinda torn," Mayes said. "We want to see our grandchildren every day to come over and spend the night, but we have to deal with this water situation. We have to use bottled water for them just to take a bath."

Both the federal Environmental Protection Agency (EPA) and the state of Michigan have declared that Flint's water is safe to drink, but many of the city's residents are skeptical.

A spokesperson for Michigan's environmental department says the city's water quality "has been meeting state and federal standards since July of 2016." And earlier this year, EPA Director Andrew Wheeler said that Flint's water is "safe to drink."

Flint Mayor Karen Weaver says she is not ready to make any declarations about the state of the water until every line in the city is inspected and additional testing is completed.

"I'm not telling people to drink the water yet," Weaver said. "Until we know we've gotten every lead and galvanized pipe out of the city of Flint, I want to err on the side of putting health over everything."

The city is replacing thousands of corroded pipes, which Weaver says she expects to be done this fall. But there's another outstanding issue -- potentially damaged plumbing and appliances inside residents' homes that have not been replaced.

Weaver says that even if all of the city's water lines are replaced, homes themselves could still harbor lead issues.

"We can have the best water in the world and new pipes, but if your in-home plumbing has been damaged, then we have an issue," Weaver said.

It's a fix she doesn't think the city should have to pay for.

"I don't care which of them takes care of it -- the state or the federal government -- but somebody needs to. And it shouldn't be on the backs of the people that didn't create this problem," she said.

In an emailed response to questions about the safety of Flint's water, EPA spokesman Michael Abboud said, "The contaminant levels in Flint, Michigan's drinking water are currently meeting all federal regulations."

And on the issue of concerns over lingering contaminants in residents' homes, Abboud points out that the EPA awarded a $100 million grant to upgrade Flint's water infrastructure, money that the city is currently using to replace damaged water lines.

"The approaches that reduce lead exposure from the lines throughout the city — such as optimizing corrosion control — also work to manage lead levels inside homes," Abboud said.

A spotlight on a city that feels forgotten

Many Flint residents say they are sick of not feeling safe drinking the city's water.

But they are also tired of being let down by those charged with serving them.

Presidential candidates are making their way through Flint, with Cory Booker, Beto O'Rourke and Julian Castro among the first candidates to visit during this campaign.

Their visits are shining a light on a crisis that has faded from the national spotlight.

"It's literally a life or death issue, as we've learned from what's come out here," O'Rourke told CNN after his town hall event in downtown Flint.

Most residents CNN interviewed welcome the attention the candidates have brought along with them. But some say they want action and that the temporary spotlight just isn't enough.

If there is any good that has come out of the city's water ordeal, it's that the community is paying attention.

In the vacuum of trust that exists here, people have learned who they can and cannot rely on.