Can we still expect a white Christmas this year? The chances for snow being around for Christmas

Metro Detroiters have loved having some snow at Christmas for a long time, even before the time we became the Motor City. But the appeal of a "white Christmas" really snowballed in 1942, when Bing Crosby recorded his famous version of the catchy song by the same name, helping a nation at war dreamily reflect on what makes a yuletide season special.

That song is now the world's best selling single. Spurred further by a movie with the same title in 1954, the notion of snow at Christmas became a fervently loved southeast Michigan ideal a couple of generations ago.

Okay, enough history. You want to know if we're going to have snow for Christmas this year, and you're used to weather people saying "maybe" and talking in percentages.

Well, I'm telling you the answer is YES. Actually, it's yes, but.... Weather folks usually use a 1" or greater snow cover to call things "white."

I don't know who made that rule. As of this morning, Ann Arbor reported a 1" snow cover, with 2" in White Lake but only a trace (less than an inch but still some snow) in Romulus.

Still, out my window in southern Oakland County, there's more snow than bare ground. It's a long way from the winter wonderland we had before the recent big melt, but some kid from Florida would start making snowballs without complaining.

If today were Christmas, I'd call it white.

Historically, we have just under a 50% chance of having at least 1" of snow on the ground Christmas morning.

But this map from one of our  best computer models shows the chances across the country of that much snow at dawn Christmas morning this year. 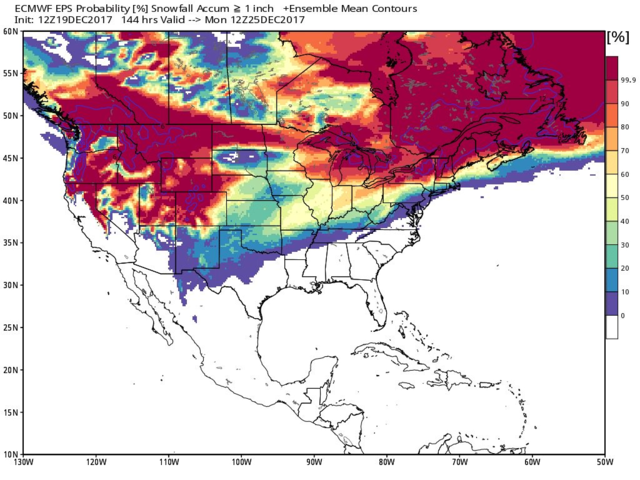 The farther north you go, the better chance you'll have, and it's almost a sure thing north of the Zilwaukee Bridge.

Weather systems are likely to bring us rain (maybe some snow mixed) Thursday night into Friday and perhaps even Saturday, before cold air pours in to change it to snow showers for Christmas Eve and maybe even Christmas Day Monday.

Yes, a fresh coating of snow looks like a good bet for the night before Christmas. It will definitely be cold on Christmas morning, probably only in the teens at dawn.

So the old snow we have will melt even more

And shoveling's not likely to be a big chore

But by Christmas Eve, snowflakes are a thing

Enough, I believe to cue Bing to sing.