Could toxic fumes from airplane engines be putting passengers at risk?

When it comes to airline safety, mechanical problems and security issues are usually a passenger's top concerns. But there's a possible health risk airline crew members call a stinky little secret. Crew members work to keep passengers safe and comfortable when flying but there's a secret they want you to know about in the cabin air. Flight attendants and pilots call it the "dirty sock smell."

Crew members work to keep passengers safe and comfortable when flying but there's a secret they want you to know about in the cabin air. Flight attendants and pilots call it the "dirty sock smell."

One flight attendant, who was granted anonymity for this story for fear of losing his job, says that smell sent him to the emergency room last summer.

"(The) smell kept getting intense, intense. (I) started to get light-headed, wanting to throw up," "Andrew" said. "For almost 15 minutes the smell just kept getting stronger and it didn't go away. That's when I felt extremely sick, light-headed and was hard to breathe."

He wasn't the only one with a serious reaction.

According to industry insiders, the source of that foul stench comes from how airplanes are designed. Air in airplane cabins comes from "bleed air" — air that begins as fresh air outside that enters the jet engine. After entering the engine, some of that air "bleeds" off, mixed in with recycled cabin air and then is pumped back into the cabin.

When a gasket leaks inside the jet engine, fumes from hydraulic fluids, oils or de-icing agents can enter the cabin.

Julie Anderson, a representative from flight attendant union Association of Flight Attendants, says some of the oils that enter the cabin contain neurotoxic additives.

"Engine oil fumes contain a very complex mixture of chemicals that can include carbon monoxide," Anderson said. She added that the "dirty sock smell" can lead to hypoxia, headache, dizziness, feeling faint, confusion and even incapacitation.

"That's obviously an issue for flight safety and security," she said.

When Andrew's plane landed and the flight attendants' symptoms persisted, they were sent to the emergency room.

"They said I had a high level of carbon monoxide detected in my blood," he said.

Anderson says the industry has known about the problem since the 1950's and she says the solution is elementary.

"My 11-year-old can recognize that it doesn't make sense to compress air in an engine that can leak oil, and feed that air to people in an enclosed space, without putting a filter on board," she said.

As simple as that sounds, the stink about dirty sock smell is wafting into the courtroom. In an ongoing lawsuit, a group of flight attendants is suing Boeing, claiming their health suffered from a fume event on an Alaska Airlines flight. 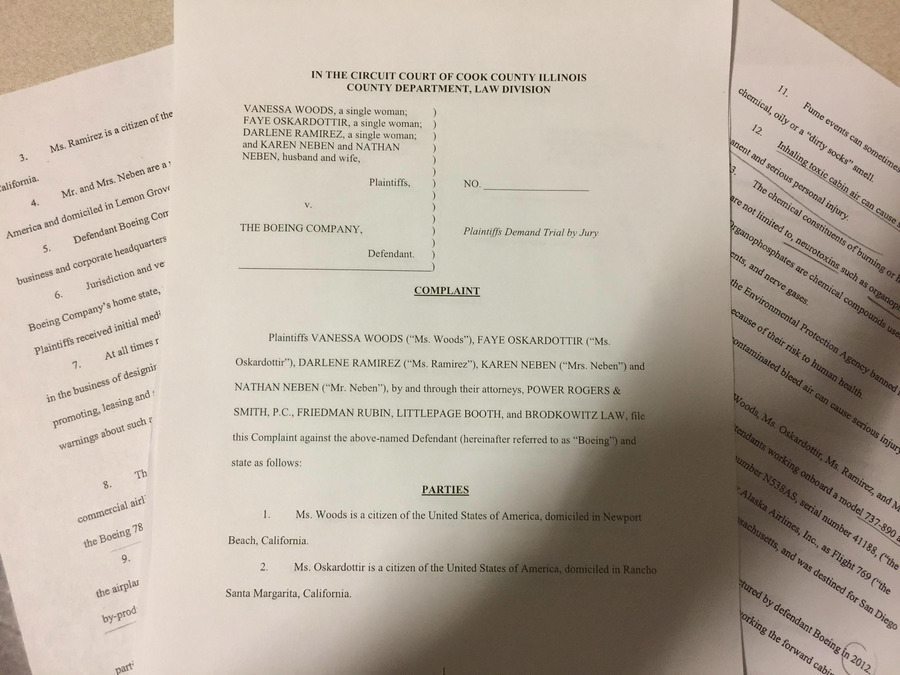 Boeing declined a request for an interview but issued a statement, saying that "Boeing has not changed its position that cabin air is safe to breathe." (See Boeing's full statement below)

Even so, Boeing's new Dreamliner 787 doesn't use bleed air at all. Instead, air is generated by compressors. But that's the only plane in the sky using that system.

Flight attendant Andrew is now plagued by a nagging cough and has to use an inhaler, causing him to worry more about travelers.

"I was concerned that if someone got sick, they wouldn't know why they got sick," he said. "My first responsibility is the safety and security of my passengers."

Airbus, the FAA and trade organization Airlines for America all issued statements when asked for comment.

Airbus stated they are "...not familiar with the events you're talking about" and referred to this study which concludes while concentrates in cabin air are present, they are very low and evidence doesn't show there is a health risk.

Allegiant and Spirit never responded to a request for comment. United Airlines referred reporters to Airlines for America.

Boeing is supportive of scientific research being conducted in the U.S. by the FAA Center of Excellence for Airliner Cabin Environment Research (ACER), NASA's Vehicle Integrated Propulsion Research (VIPR) and the American Society of Heating, Refrigeration and Air Conditioning Engineers (ASHRAE) organization through research project 1262 that is measuring air quality and the potential for bleed air contaminants. We've also participated in EASA's Rulemaking and the UK Committee on Toxicology (COT).

Despite this established research to the contrary, a number of advocacy groups continue to promote the idea that exposure to trace levels of organophosphate contamination -- far below published standards -- presents a risk to human health.  They are very vocal and, from time to time, the media picks up and publishes their stories.  However, because the science has not changed, Boeing has not changed its position that cabin air is safe to breathe - a position that is firmly based on the reliable scientific data currently available.

STATEMENT FROM AIRLINES FOR AMERICA:

Safety is ingrained in the culture of the U.S. aviation industry, and at the forefront of every aspect of airline operations. This includes a commitment to safeguarding the well-being of our crewmembers and passengers by providing a safe and healthy environment to work and travel on each and every flight. Incidents of odors, smoke and/or fumes in the cabin are atypical and infrequent. Each carrier follows their own individual protocols and procedures to address smoke, fume and odor issues onboard their aircraft. Modern aircraft have highly effective environmental control systems that filter air as it is circulated throughout the aircraft cabin, and multiple studies over the years have consistently concluded that cabin air meets or exceeds health and safety standards.

The FAA is committed to protecting the safety and health of passengers and cabin crews on our nation's airlines. The FAA has strict cabin air standards, and studies have shown cabin air is as good as or better than the air found in offices and homes. In rare instances, certain mechanical issues can cause fumes to enter the cabin. Airlines are required to report all fume events to the FAA. The FAA thoroughly investigates these events and makes sure the cause is addressed before the aircraft is returned to service.

Following a forensics analysis of each plane, our maintenance and engineering teams concluded the overwhelming majority of the reported smells had no association with the aircraft. Odors can come from a variety of sources not related to the aircraft. Still, we've taken immediate action such as increased inspections of cabin interiors, which includes deep-cleaning of onboard food and beverage equipment and evolved the engine cleaning process. As part of our ongoing commitment to safety, we work very closely with our employees, unions and partners to immediately report, investigate, and solve any maintenance-related issues. We speak with our counterparts at Airbus and Boeing on a regular basis as our guests and crews' safety is our top priority.

Southwest flies the most modern versions on the Boeing 737 aircraft series: the 737-700, 737-800, and 737 MAX. These aircraft have state-of-the-art climate and cabin environmental control systems designed to maintain a safe and comfortable aircraft cabin. We are not aware of any reports on the issue you mention. We recommend contacting Boeing or Airlines for America, our trade association, for any industry perspective on this topic.