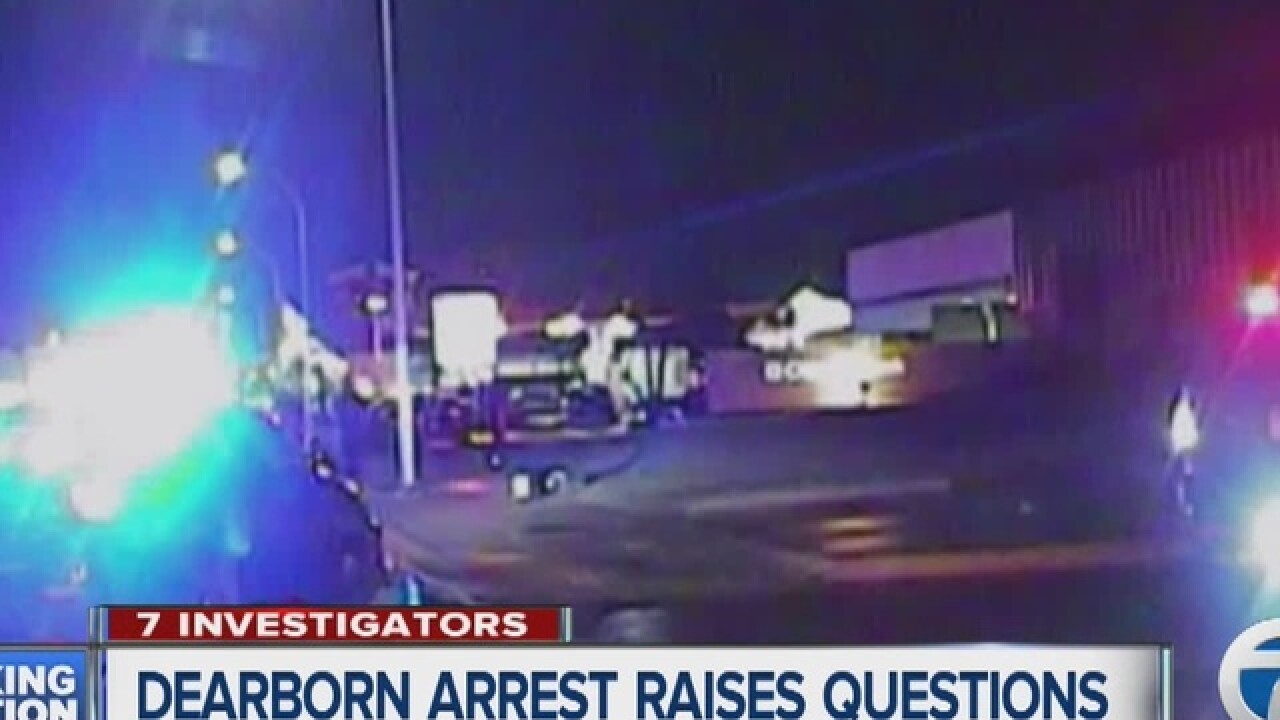 "The right back of that car is demolished," we hear on police dash cam recordings.

"Out of nowhere... someone hit the car! [my head is hurt bad]," a victim is heard telling someone off camera.

The driver of a Ford Fusion was heading eastbound on Michigan Ave. when police say he struck a Mercedes traveling in the far left lane.

The Fusion loses control, loses a front wheel after hitting the curb, but continues to drive on three wheels across a bank's front lawn, striking another car and driver.

"Some guy smashed right into my car!" a victim tells 911 dispatchers.

That was just part of the call that came into 911 from one of the frantic women hit by what officers would soon call a drunk driver.

An ambulance and more emergency units show up while the driver of the Fusion remains in his car.

Video of the car shows how damaged his front end was from the initial impact.

According to the written police report, officers say the driver appeared intoxicated, that his eyes were bloodshot, and he admitted to drinking.

"Did you have something to drink?" an officer asks. "I did," the man replies. But he can't even tell officers where he was coming from. And according to the report, when he exits the car he can't stand.

He is moved inside a waiting ambulance, where officers say he fails a field sobriety test, and refuses to submit to further tests and a blood draw without a court order.

So he's placed under arrest for Operating While Intoxicated. He is read his rights and taken away to the hospital complaining of a leg injury.

But before all of this takes place, officers learned a bombshell. After initial contact with the suspect, they somehow quickly learn who he is.

"That's the mayor's son!," one says off camera.

"That's the mayor's kid?," says another.

"Your dad is the mayor, huh?," says another.

Dash cam audio and officer recorded communications repeatedly cut off each time officers broach the subject of his relationship to the mayor.

We don't hear many of O'Reilly's responses to the officers questions. Nor does he ever appear on dash cam video, being removed from his vehicle, and performing and failing those initial sobriety tests.

Multiple units, all equipped with video and audio recording devices responded to this scene, but none of them put their cameras on the drunk driving suspect.

The 7 Investigators, through the Freedom of Information Act, requested all audio and video recordings from the Dearborn Police Department. We received hours of material.

But one thing appears to be missing, and it's a crucial piece missing: audio or video of the corporal who removed O'Reilly from his car, witnessed his unbalance and conducted those tests.

Audio only picks up when O'Reilly is being read his rights and is taken away, behind the closed doors of an ambulance.

"It's not totally uncommon, but it's very odd."

Missing audio and video and at the most critical times, that is.

Defense attorney Patrick Barone has been specializing in these types of cases for 25 years. We had him review the provided audio and video. He too questioned why O'Reilly is never seen on tape and rarely heard. Including the most incriminating interactions with officers.

"The fact that none of it was captured on videotape certainly causes one to have some suspicion. That there is some sort of special treatment here, or some reason the police didn't want this to be on videotape. They certainly had the ability to that and the option to do that," Barone said.

He continues, "They should have changed the position of one of those vehicles to capture everything on videotape."

Once at the hospital, where those judge ordered blood tests were taken, O'Reilly was issued a ticket, his driver's license confiscated, and he was released into the care of the hospital. No lockup and no embarrassing booking photo.

He says a booking photo provides further photographic evidence of that night. Furthermore, he says, "By them not taking him back to the station and housing him--meaning putting him in a jail cell until the next morning, they put the public in danger."

O'Reilly aside, this case raises larger questions about police protocol when it comes to recording sensitive incidents.

Currently in the state of Michigan, there is no mandatory requirement that arrests be videotaped. It is also at the officer's discretion to turn on and off their on-person recording devices. Each department has different procedures.

"When we talk about what they should do and what they are required to do, those are two different things," adds Barone.

Some are lobbying the legislature to change that.

"Those laws are good to protect both the public as well as to protect the accused," he says.

It is often customary for field sobriety tests to be performed in front of a cruiser's camera to help the officer establish probable cause and back up the written report.

A lack of video evidence, such as in this case, could work to the offender's advantage.

While blood test results will ultimately prove guilt or innocence, "That doesn't mean its not part of the defense," Barone says.

"You would use that to establish perhaps there is no probable cause or they don't have enough evidence to establish beyond a reasonable doubt for a conviction."

In the O'Reilly case, the fact that nearly half a dozen officers on scene were somehow unable to provide a complete picture of such a high profile arrest, in which officers surely knew would lead to intense scrutiny, leaves the Dearborn Police Department wide open to not only questions of protocol, but accusations of fairness and accuracy in all their arrests and interactions with the public.

Through FOIA, we obtained Devon O'Reilly's blood tests from MSP. It was 0.224, nearly three times the legal limit and considered "super drunk" in Michigan.

Hours after our report, in response to follow up questions, the Chief Of Police tells Action News he is launching an internal review of the incident and arrest procedures, and will consult with experts, and will then issue a response to our story.