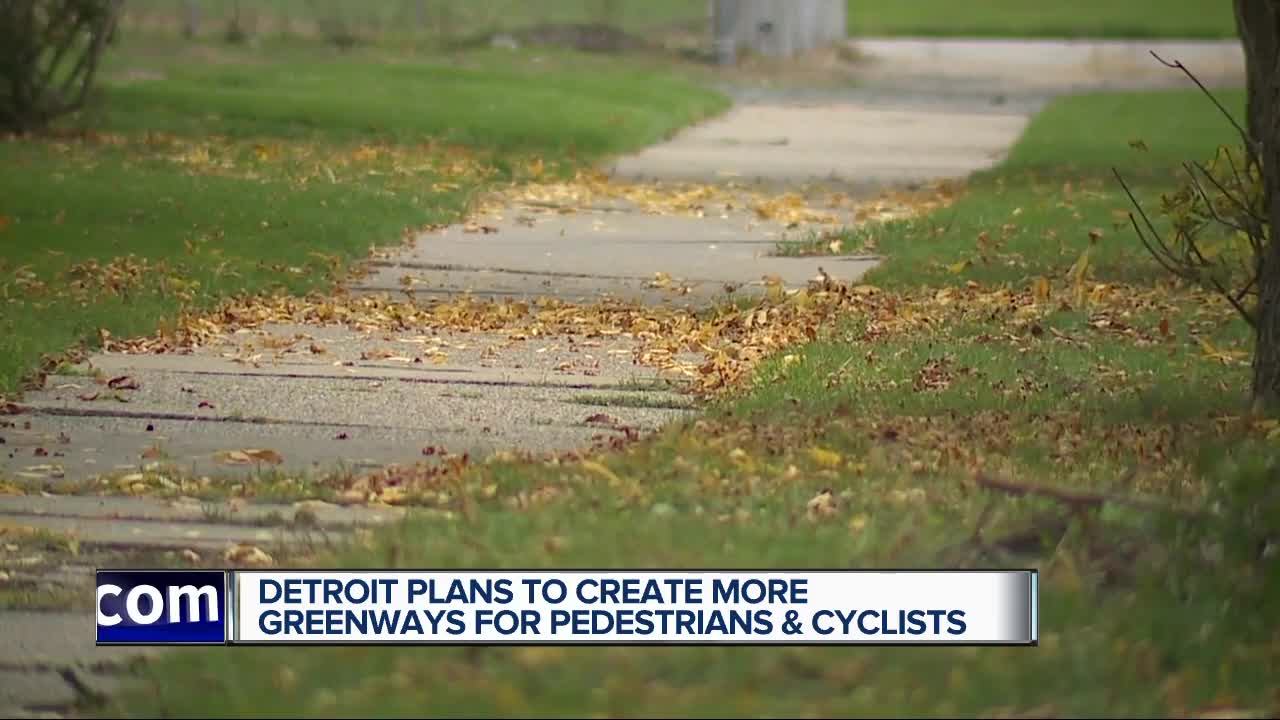 The city of Detroit plans to create more greenways for pedestrians and cyclists like the Dequindre cut.

DETROIT (WXYZ) — Residents in one Detroit neighborhood are fighting to remove blight and bring back services by giving tours and distributing pamphlets.

As the city of Detroit plans to build a greenway for pedestrians and cyclists along the old railway tracks – similar to the Dequindre cut – residents noticed the new greenway will border their "Midwest" Detroit neighborhood.

They created a detailed pamphlet and neighborhood tour to ask the city to invest in the neighborhood itself, not just the bike path that will run along the border.

In a neighborhood with more than 11,000 people - they say there are 19 auto shops in a square mile, but zero schools, zero community centers and zero grocery stores @wxyzdetroit @StoriesFromDet @CityofDetroit https://t.co/fvKYvyjHKf pic.twitter.com/BjsvminYMo

Long is a member of the Greenway Heritage Conservancy Board. A board she created with others who live in Detroit's "Midwest" neighborhood. She believes the new Greenway can bring more business and jobs to the neighborhood, but there is much to be done before then.

Long and her board did research and created a detailed pamphlet which outlines the battles they face. About half the homes are abandoned and many are in disrepair. The other half of homes are well cared for and lived in by over 11,000 residents.

There are a lot of people and a lot of auto repair shops.

"Within a square mile we had 19 of them," Long said. But not much else.

Twenty-six percent of the people who live here are under 18. That's about 3,000 kids and yet, there are no schools just boarded up structures that used to be schools.

"We’ve been fighting for a community center, but you closed the school when there’s no other schools around here," Long said.

Now that the city plans to build a greenway bordering the Midwest neighborhood, Long and her neighbors saw an opportunity.

"We made the tour because city officials agreed to come out and see for themselves what our neighborhood looks like," Long said.

They’ve given tours to city officials, department heads and council people ending with a request:

"Let us sit at the table when you decide to make determinations for our neighborhood. Let us tell you some of the things we would like to see instead of people from the outside deciding what to put in or not put into our communities," says Long.

They are also giving these pamphlets and neighborhood tours to non-profits and soon local churches. Their goal is to get the word out. If the blight is removed, there is a lot of beauty, passion, potential and hope for the future in Midwest Detroit.

"There’s still people in these neighborhoods that care. We really care!"