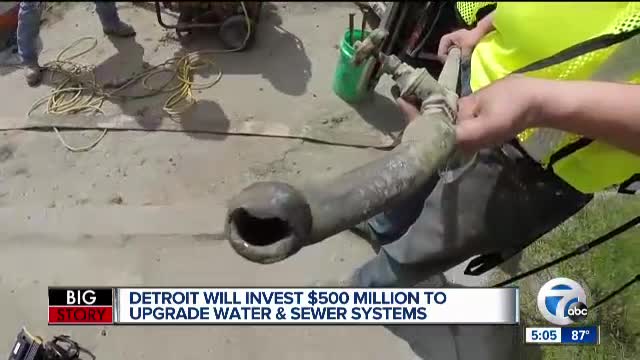 Mayor Mike Duggan and the Detroit Water and Sewerage Department announced Thursday a $500 million program to begin to upgrade the city's water and sewer systems. 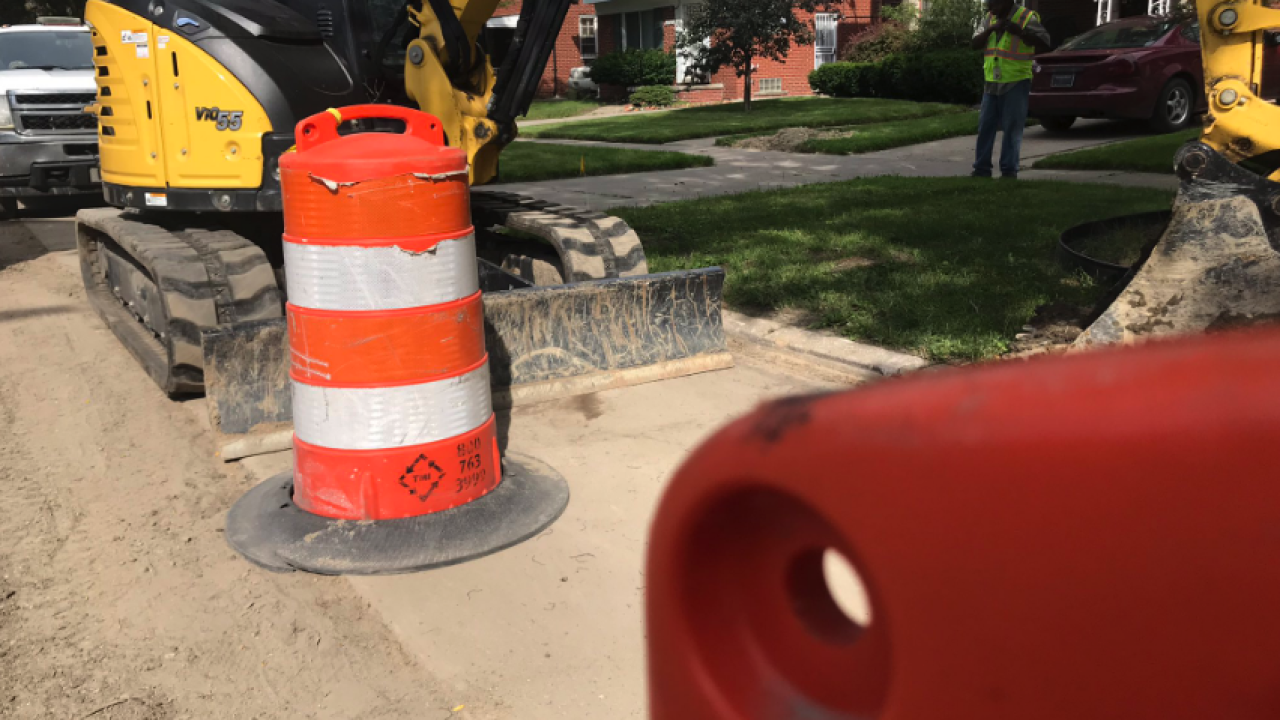 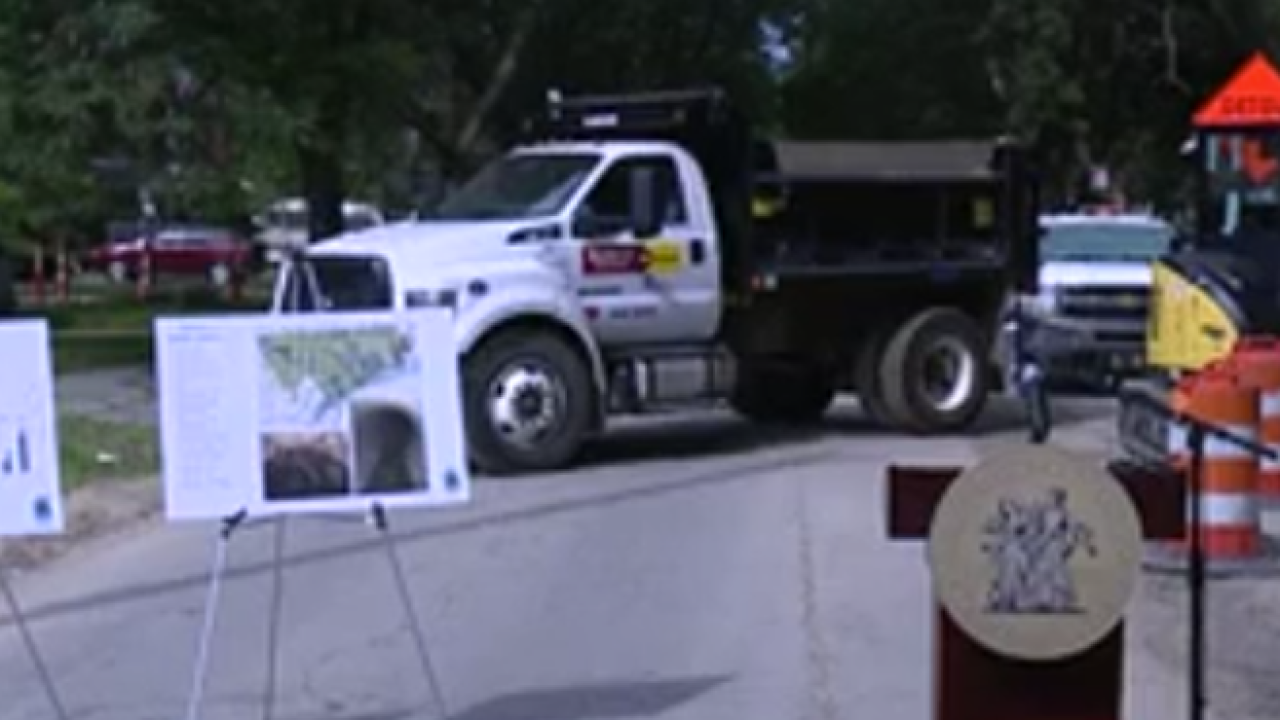 DETROIT (WXYZ) — Mayor Mike Duggan and the Detroit Water and Sewerage Department (DWSD) announced Thursday a 5-year, $500 million program to begin an upgrade to the city's water and sewer systems.

The DWSD Capital Improvement Program (CIP) addresses the need to improve water and sewer systems’ reliability. Previously the department solely used the frequency of water main breaks and water-in-basement complaints to drive the strategy. This led to projects being done across the city without a cohesive plan for a neighborhood. Now, DWSD assesses the condition of the water and sewer infrastructure and develops a plan for rehabilitating those systems, which takes into account other public or private investments to a neighborhood. Factors such as the probability of a failure (breaks, sinkholes, etc.), as well as the consequence of failure (i.e. near a school or hospital, the risk is higher) are also included to prioritize the CIP strategy.

In calendar year 2018, DWSD upgraded 25 miles of water main, lined 22 miles of sewer piping and replaced 173 lead service lines. This was the most water and sewer construction in the past 15 years.

DWSD’s Capital Improvement Program is intended to improve the level of service and the quality of life in Detroit by:

"The city has aging water and sewer infrastructure where significant maintenance has been deferred for decades. Not only will this massive effort improve service delivery and the quality of life in the neighborhoods, it also will put more Detroiters to work," according to the city.

DWSD is now able to make this type of investment due to the $50 million annual lease payment for the regional water and sewer system operated by the Great Lakes Water Authority since 2016 and a 94 percent bill collection rate that provides the additional dollars (the rate was 77 percent prior to 2016).

The DWSD five-year, $500 million CIP is possible due to the $50 million annual lease payment from the Great Lakes Water Authority (GLWA) to operate the regional water and sewer systems for the next 40 years, and cash received from improving the department’s collection rate in the past three years, from 77 percent to 94 percent.

Here is more detailed information from DWSD regarding the plans for this year and hiring Detroiters:

Planned Investment this Year
Active construction contracts for Fiscal Year 2020 starting this July 1, are composed of 29 miles of water system improvements including water main and meter replacements at $38.6 million, 19 miles of sewer lining at $18.8 million and an $8.5 million project on Oakman Boulevard which is water main replacement and GSI between Joy Road and Tireman Avenue. The GSI project will manage approximately 37 million gallons of stormwater annually. There are also several projects in the planning and design phase with the costs estimated at $32 million for the water system and $16 million for sewer system improvements.

Replacing Lead Service Lines
As part of the DWSD CIP, when contractors are on a street to replace a water main, they also replace the lead service line – when it exists – with copper pipe with owner/occupant permission at DWSD’s cost. The service line is the pipe which goes from the water main to the house. When DWSD is replacing the water main, a specialized crew will dig a four-foot by four-foot hole around the stop box (turn-on/off valve) in the front yard of each home to verify the service line material. If there is a lead service line, when the new water main is about to be connected, the crew will return and replace the lead pipe with copper.

DWSD implemented an outreach plan last year in advance of construction projects, and to obtain residents’ permission to replace a lead service line on the property during water main work. This begins a minimum of 40 days from the start of construction and includes door-to-door canvassing, letters, and community and block club meetings.

Hiring Detroiters
The DWSD Capital Improvement Program Management Organization (CIPMO) has designed a contractor outreach program to engage more Detroit-based contractors and partner with them to hire Detroiters for DWSD work. The office held its first contractor fair in January of this year and will hold another event early in 2020.

Through the Executive Order 2016-1, DWSD is requesting contractors have at least 51% of the hours worked on its construction projects be performed by Detroiters.

Watch the press conference below: