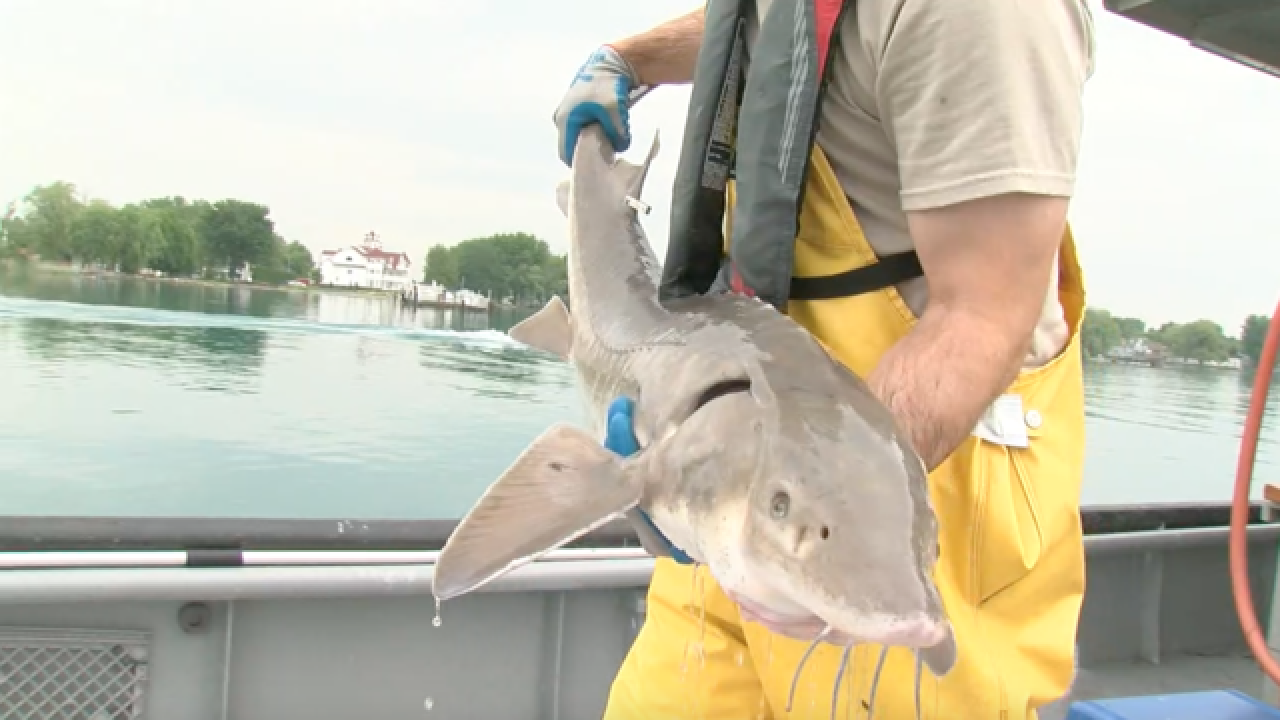 It wasn’t long ago that lake sturgeon numbers were plummeting in the Great Lakes region.

The ancient fish has a history that, scientists say, dates back millions of years — but more recently the continent’s largest fish species was threatened by intense fishing. Once killed by fishers because they were becoming a nuisance, they became more threatened when the meat and eggs of lake sturgeon became popular.

It’s estimated that 4 million pounds of lake sturgeon were being fished between 1879 and 1900. That paired with pollution led to a huge population drop, but more recently work has been undertaken to preserve the ancient fish.

“They’re an important indicator species,” said Jan-Michael Hessenauer, a researcher from the Michigan Department of Natural Resources. “If the lake sturgeon are doing well, that’s a pretty good sign that the entire system is doing well.”

According to Hessenauer, the lake sturgeon are doing well. Along Lake St. Clair and the St. Clair River the DNR hasn’t done any stocking of the fish, yet it’s believed they have the highest sturgeon population of any body of water in the area.

“It’s really rewarding to know that there’s fish underneath us right now that could be 100-years old - 100 pounds or more,” said Hessenauer, as the boat floated near Algonac. “That’s cool to me, you never know what you’re going to get on the line until you pull it up.”

Hessenauer is a member of the five-person crew that’s surveying the North Channel of the St. Clair River. During a four-week period the crew sets fishing lines that sit at the bottom of the water in various areas between Deckers Landing and Algonac. The lines sit for nearly day before the crew begins the hours-long process of hand-pulling the line.

Each line has 25 hooks, though it’s not uncommon to have an entire line come up empty. That doesn’t mean the population isn’t improving — in fact, one day the DNR brought in 22 sturgeon this week. On the day they invited 7 Action News on-board for an up-close look at their research work they netted nine of the freshwater monsters.

“The biggest one we ever got was 6-foot long and weighed 130 pounds,” said Captain Roy Beasley, showing a picture.

“How big the population is, it surprises me,” he added.

That’s good news for the eco-system. Beasley has more than 20 years experience on the crew. When the Michigan DNR started researching the population of lake sturgeon in the 90s they didn’t see the numbers they do, today.

At this point the crew from the Lake Huron-Lake Erie Area fisheries unit has tagged more than 3,000 lake sturgeon. Other groups, like the U.S. Fish and Wildlife Service, tags fish in a similar matter nearby.

On Thursday, the crew pulled up several larger sturgeon weighing between 35 and 50 pounds, in addition to several younger sturgeon — some tagged for the first time. The hope is that the DNR will continue to see those lake sturgeon grow bigger, stronger and older for decades to come — a sign that the ecosystem in the Great Lakes region would continue to thrive.