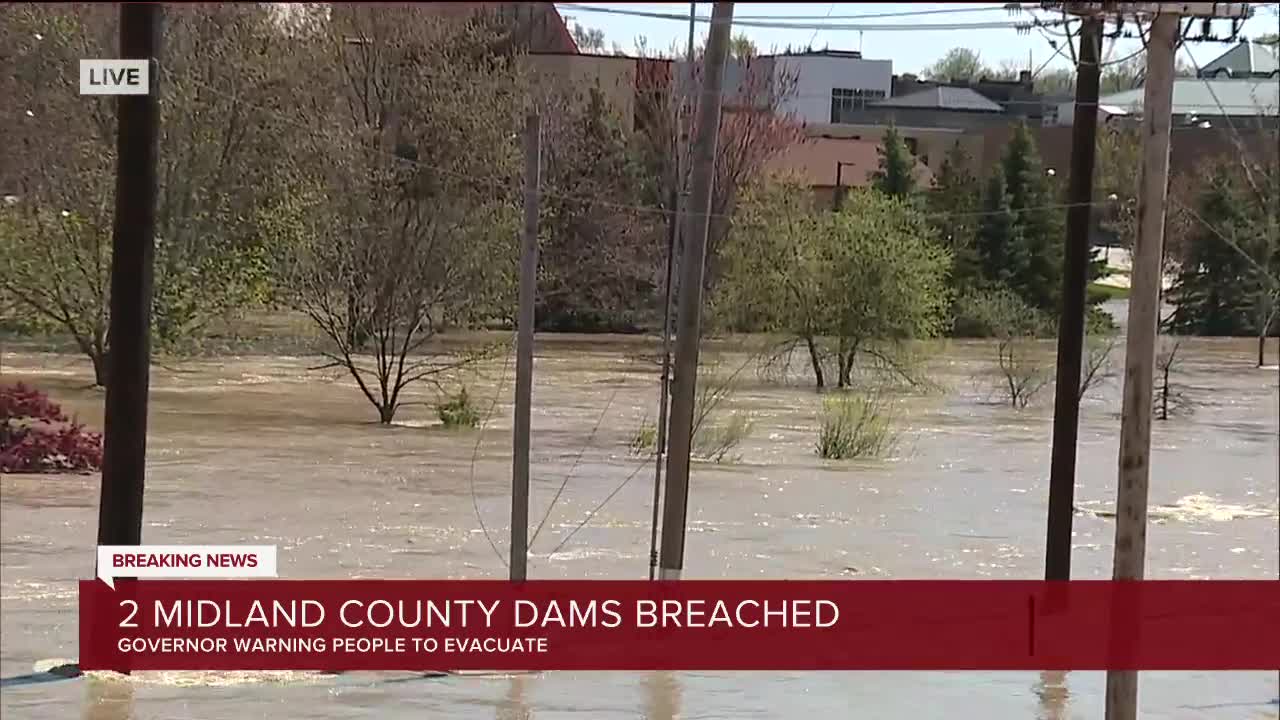 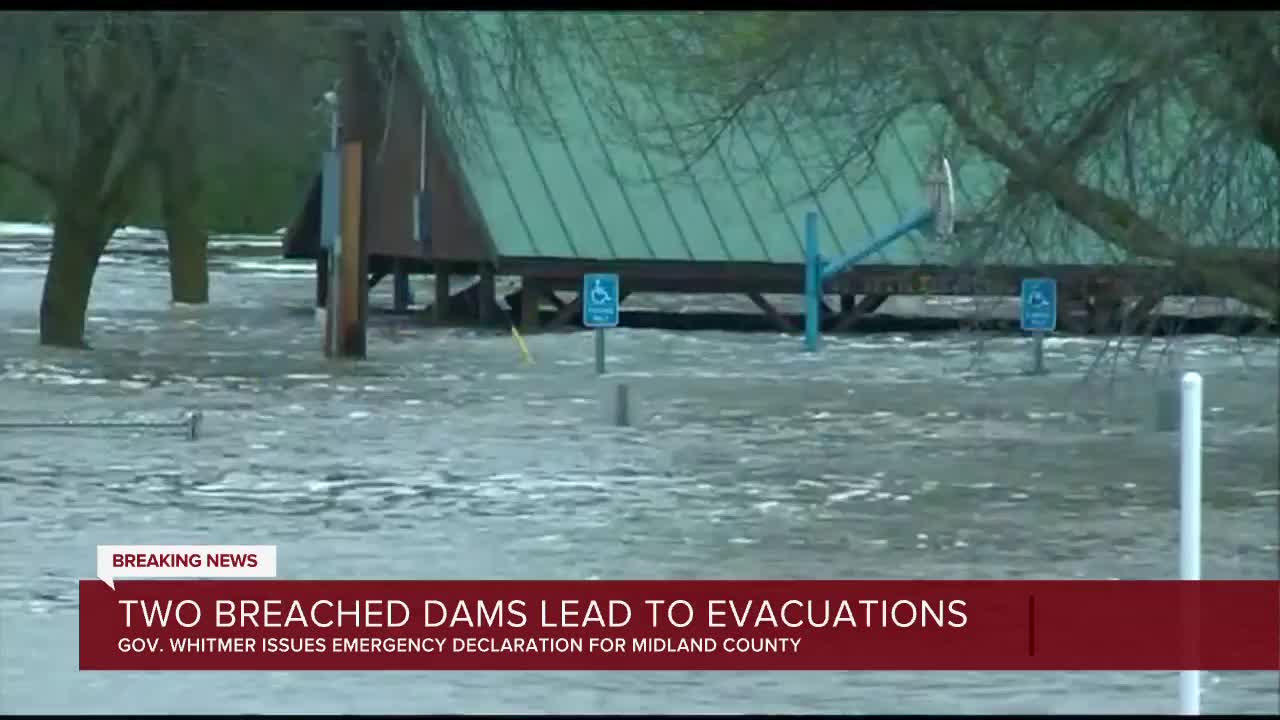 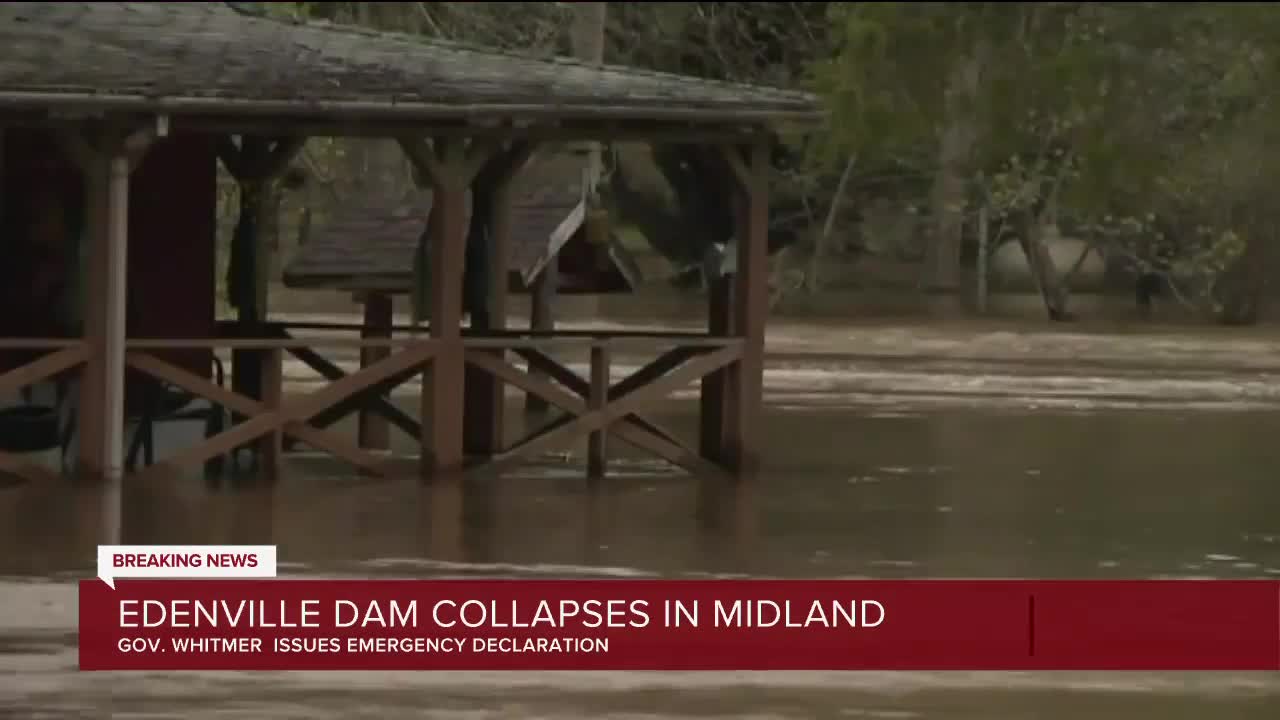 GLADWIN COUNTY, Mich. (WXYZ) — Residents of Edenville and Sanford in Mid-Michigan have been ordered to evacuate after the breach of two dams, prompting Gov. Gretchen Whitmer to declare a state of emergency for the area.

Downtown Midland could be under nine feet of water – historic water levels from flash flooding – according to the governor.

So far, 10,000 people have been evacuated or are in the process of being evacuated, the Community Affairs Director for the City of Midland Selina Crosby Tisdale told 7 Action News Wednesday. The process have been going smoothly as residents have taken requests seriously.

According to Tisdale, they are calling this a 500-year flood. A 1986 flood hit historic level at about 33.9 feet. Officials are expecting Tittabawassee River levels to reach around 36 feet later Wednesday morning. Typically, a flood emergency declaration is made when water levels hit 20 feet.

At 5:44 p.m. Tuesday, Midland County dispatch and emergency management reported that the Edenville Dam on the Tittabawassee River had collapsed, according to the National Weather Service.

Flash Flood Emergency including Sanford MI until 8:30 AM EDT pic.twitter.com/ukXvwJeJvQ

Thank you @GovWhitmer for helping us with the Emergency Declaration. Our community is facing almost certain devastation by morning. Forecasters are predicting a 38' crest... that's 4' higher than the 500 year flood in 1986. pic.twitter.com/2JauLIaNls

Life-threatening flash flooding is moving through the area from the dam failures. The warning is in effect until 8:30 a.m. Wednesday, and is for the Tittabawassee river from the Sanford Dam, to the Chippawassee school area in East Central Midland County. The National Weather Service warns that if you are living in low lying areas below the Edenville Dam, you should move to higher ground immediately. Also, do not attempt to drive across flooded roadways.

Just after 8:30 p.m., county dispatch said that failure of the Sanford Dam was imminent. By late Tuesday, the dam was breached. People down stream of the Sanford Dam were told to seek higher ground immediately because the impact of the situation could be deadly.

In response to the dam break, Gov. Gretchen Whitmer issued an emergency declaration for Midland County.

"The State Emergency Operations Center is already activated and fully engaged in the response," according to a statement from the governor's office. "State officials from multiple departments have been on-site throughout the day. We will share additional information as it becomes available.”

Two schools were opened for evacuees in the Midland area, about 140 miles north of Detroit, after the breach of Edenville Dam. The dam holds back Wixom Lake.

Shelters for residents have opened across Midland County and will remain open until further notice.

“If you have not evacuated the area, do so now and get somewhere safe,” Whitmer said. “This is unlike anything we’ve seen in Midland County. If you have a family member or loved one who lives in another part of the state, go there now. If you don’t, go to one of the shelters that have opened across the county. I want to thank the emergency responders, Michigan National Guard members, and the Michigan State Police on the ground helping residents evacuate. Stay safe, and take care of each other.”

You can read the full emergency declaration here. For more information on shelters, road closures and updates, visit Midland911.org.

Editor's Note: The Associated Press attributed to this article