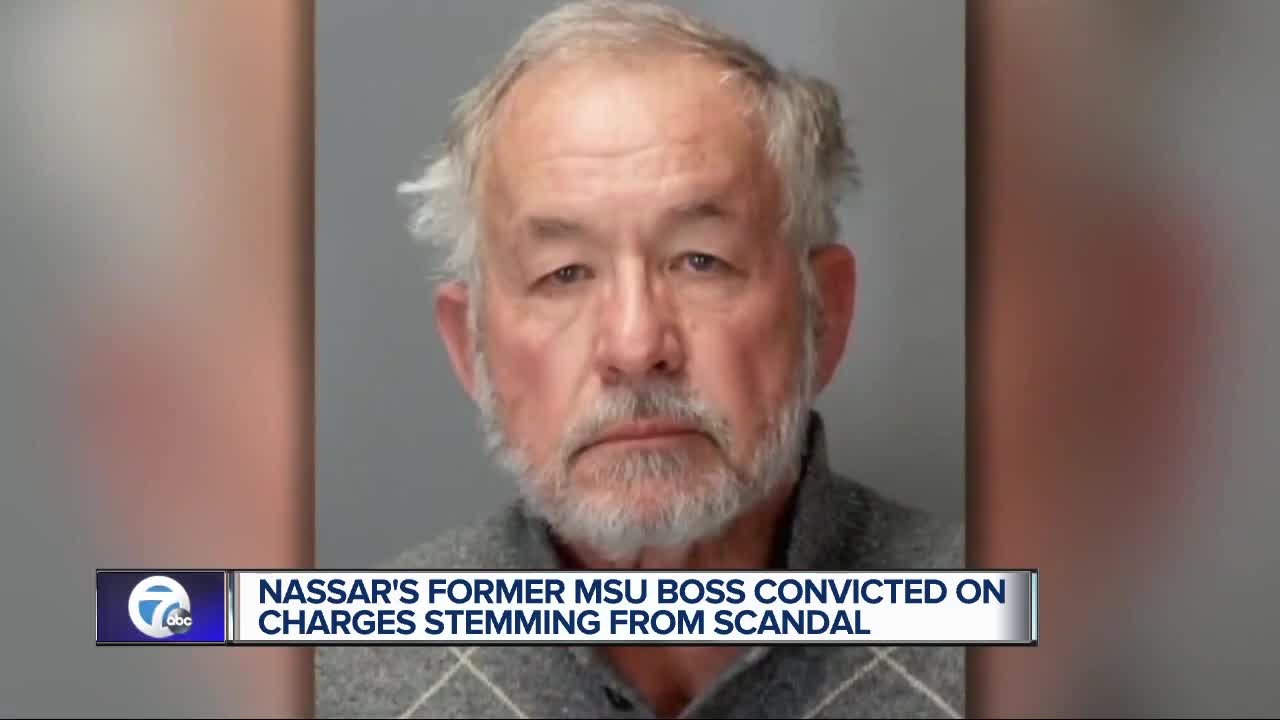 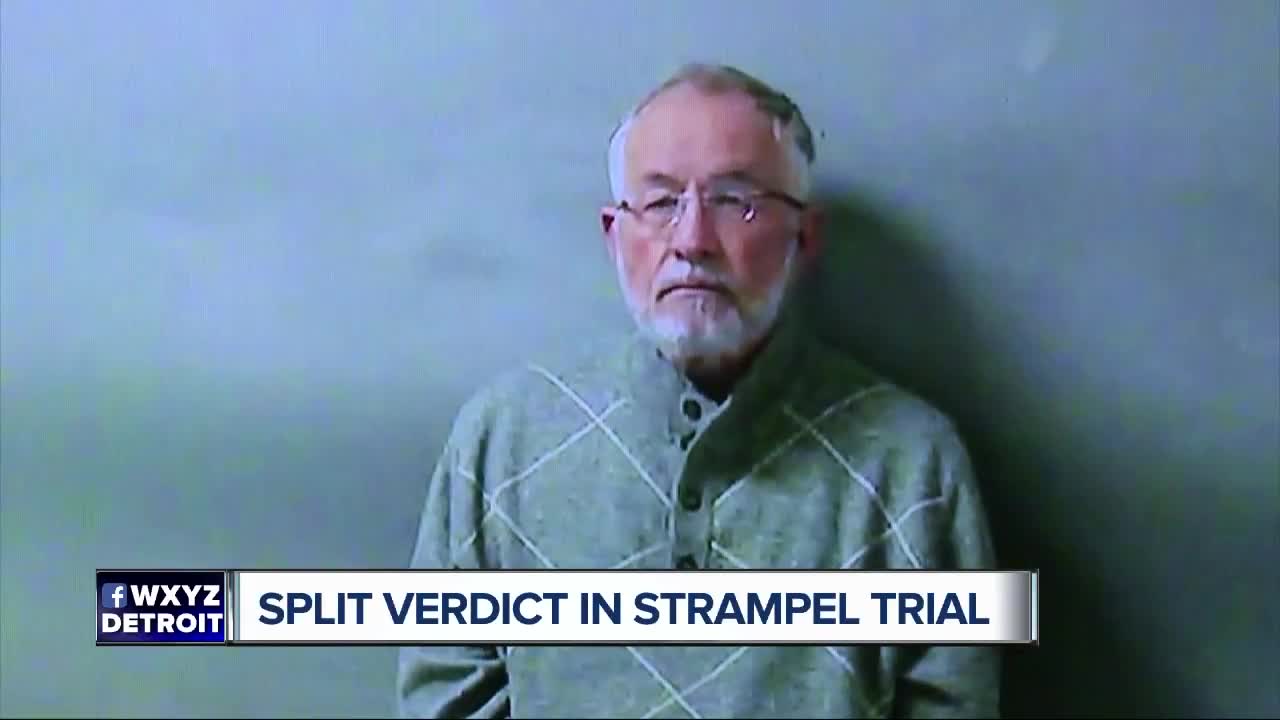 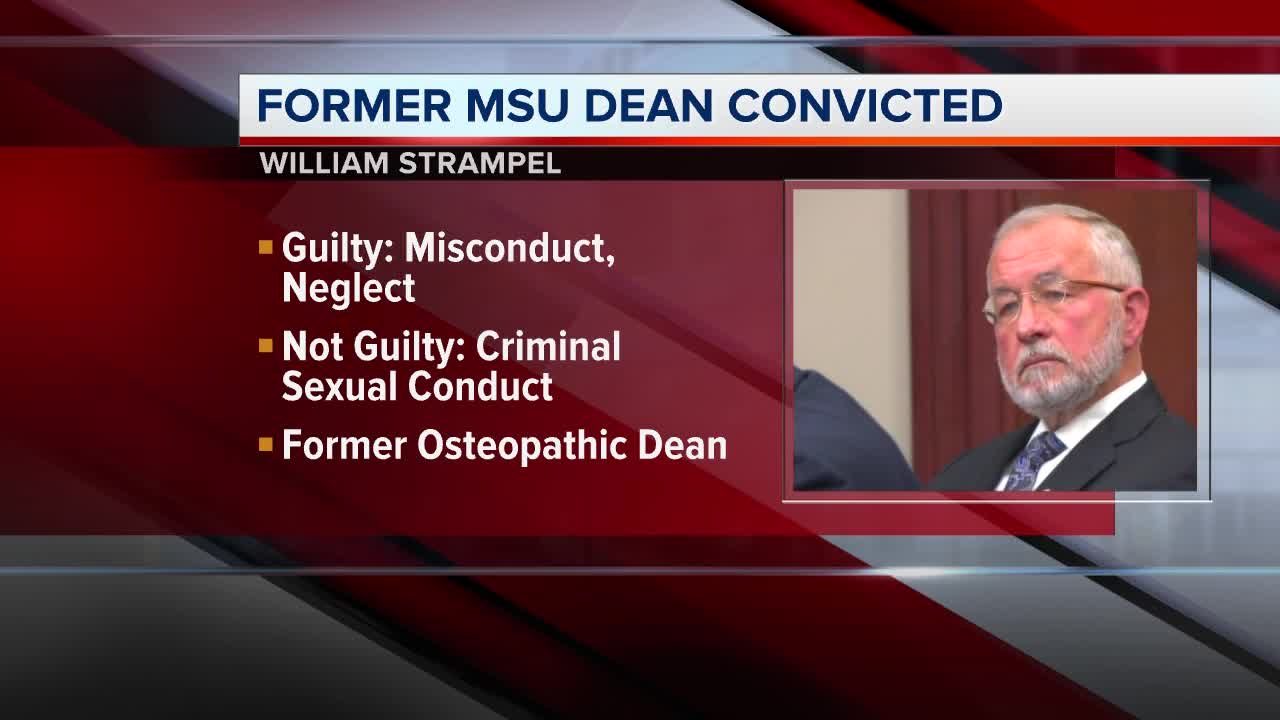 Strampel was found guilty on one count of misconduct by a public official and on two counts of willful neglect of duty. He was found not guilty on a count of second degree criminal sexual conduct.

Jurors began deliberating Tuesday after more than two hours of closing arguments in the trial of the 71-year-old Strampel, who led the College of Osteopathic Medicine for about 15 years before being forced out. He is accused of failing to ensure that Nassar followed the protocols, abusing his public office to sexually proposition and make explicit comments to female students, and inappropriately touching two on the buttocks. If convicted of the most serious charge, a felony, he could face up to 15 years in prison.

He was the first person charged after Michigan's attorney general launched an investigation 1½ years ago into how Michigan State handled complaints against Nassar, who pleaded guilty in 2017 to molesting patients and possessing child pornography. Ex-university President Lou Anna Simon and former women's gymnastics coach Kathie Klages face charges of lying to investigators.

She said Strampel "did not a single thing" to see through the limits put on Nassar in 2014 after a patient accused the doctor of sexual contact — such as not treating patients near any sensitive areas on the body without a chaperone present.

"He was the one who put those protocols in place," Hagaman-Clark said.

But Strampel's defense attorney John Dakmak said the school's investigation cleared Nassar, and there is no evidence that Strampel purposely ignored any duty related to Nassar. He said many other people and entities at Michigan State also had a role — including the Office of Institutional Equity, the general counsel's office, the provost's office, the Health Team, the radiology chairman and people who ran sports medicine.

Dakmak said nothing ever happened between Strampel and students who met with him after struggling on exams, and the students ultimately moved forward in school.

"All we're left with is locker room talk, is bawdy talk, is ribald talk, is maybe offensive to some people, maybe not to others, not politically correct talk," he said. He added later: "You will never see inappropriate language result in a criminal conviction in this state because this is the United States. You need more. In this case, you need corruption. You need an intent. And after everything we've heard, it's just not there."

Nassar was fired in 2016 after another victim went public and brought Title IX and police complaints. He was sentenced to effectively spend the rest of his life in prison in 2018 after hundreds of women and girls gave powerful statements against him in two courtrooms.

She said this about the Strampel split verdict, "It's a split feeling. I'm grateful that he's found guilty on some of the charges, but obviously not happy and quite angered that he was not found guilty on the charges of sexual misconduct."

Michigan State University released this statement regarding the verdict:

Today’s verdict reinforces the need for Michigan State to continue improving the climate for all faculty, staff and students at the university. We will continue addressing the culture that allowed such abhorrent behavior as we work on meaningful actions to be more aware and more accountable. We have improved our dean review process, improved patient-care policies and our College of Osteopathic Medicine is developing a forward-looking strategic plan to improve and assess the educational climate. We know we have more work to do and are committed to the changes needed.

Strampel faces to up to 5 years in prison. He'll be sentenced on July 31st.