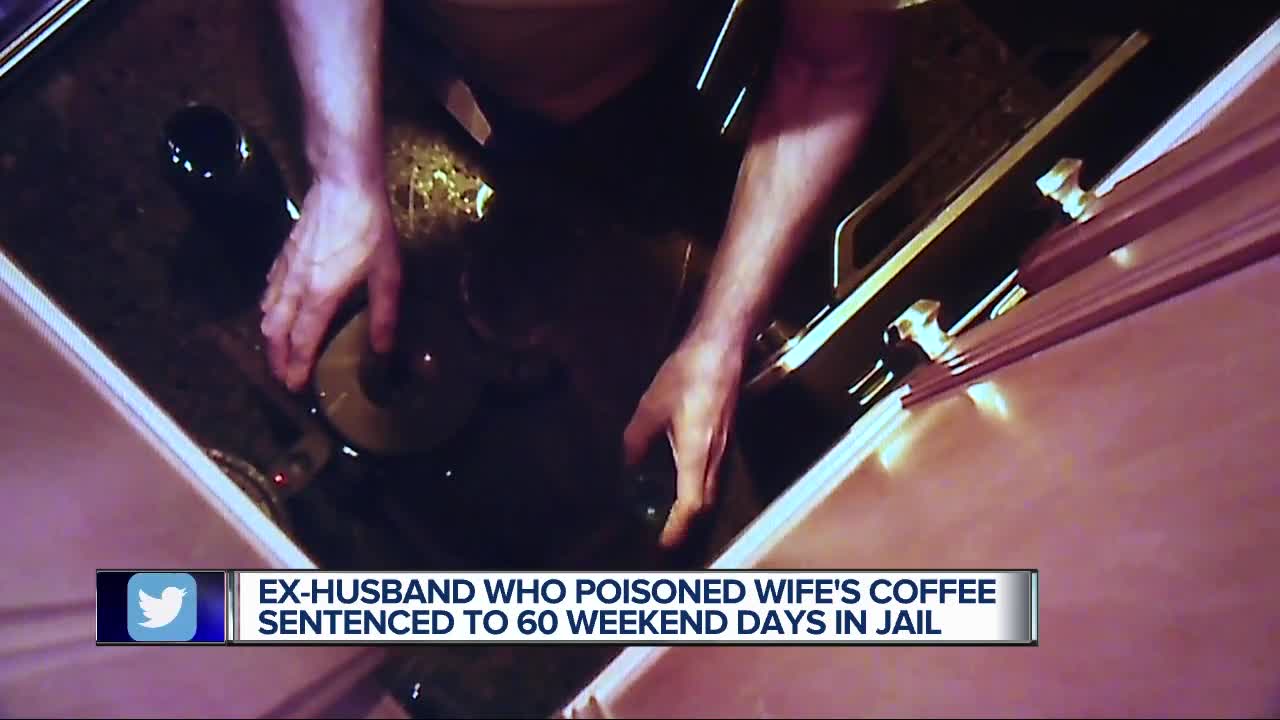 Prosecutors in Macomb County are outraged after 46-year-old Brian Kozlowski was sentenced to 60 weekend days in jail for poisoning his wife's coffee.

(WXYZ) — Prosecutors in Macomb County are outraged after 46-year-old Brian Kozlowski was sentenced to 60 weekend days in jail for poisoning his wife's coffee.

At his sentencing Thursday morning, Kozlowski's now ex-wife told the court, "He put eight sleeping pills into that coffee pot every single day for weeks. An adult dosage according to the packaging is one. I was being hunted by a dangerous predator, but in this nightmare the predator was Brian."

According to Macomb County prosecutors, in July 2018, the victim reported feeling tired, nauseous and experienced blurred vision shortly after drinking coffee on the days her husband prepared it for her.

Just two months earlier, she had filed for divorce from Kozlowski. She had cameras installed in the kitchen as a result of her suspicions against her husband. The footage revealed Kozlowski poured Diphenhydramine into his then wife's morning coffee on multiple occasions, intentionally poisoning her, prosecutors say.

The woman called her divorce attorney and immediately moved out of the couple's Macomb Township home.

@ProsecutorSmith calls Kozlowski’s sentence “a slap in the face” and says his office has already started the appeal process. @wxyzdetroit pic.twitter.com/agYHV7CKUo

According to prosecutors, "the last coffee that the defendant had made for the victim was analyzed and contained 127 milliliters of Diphenhydramine."

After the sentencing, Macomb County Prosecutor Eric Smith said, "You shouldn't be able to commit at 15 year-felony by poisoning someone and only have to serve weekends. It's unbelievable to me."

Kozlowski's ex-wife asked for him to be sentenced to the fullest extent of the law that the judge saw fit.

Visiting judge Anthony Viviano said he was moved by her statements and said, "She did suffer. She suffered because of the actions of this man."

However, he then went on to say Brian Kozlowski went under psychiatric care when this all unfolded.

Viviano said, ".. which means he does have a sense of remorse. He has taken steps to take care of a situation that clearly was out of hand."

Brian Kozlowski told the court “I'm truly sorry for what I've done .. I deeply apologize.” His now ex-wife says the poisoning started two months after she filed for divorce. She told the court, ”Once Brian realized he'd lost me, his goal was to eliminate me.” @wxyzdetroit pic.twitter.com/Rx4ozM6hLH

Prosecutor Smith said, "It almost appeared the judge was more concerned about the defendant's freedom and the defendant's employment. That's something we can't stand for."

He went on to say that his office is already working on an appeal.