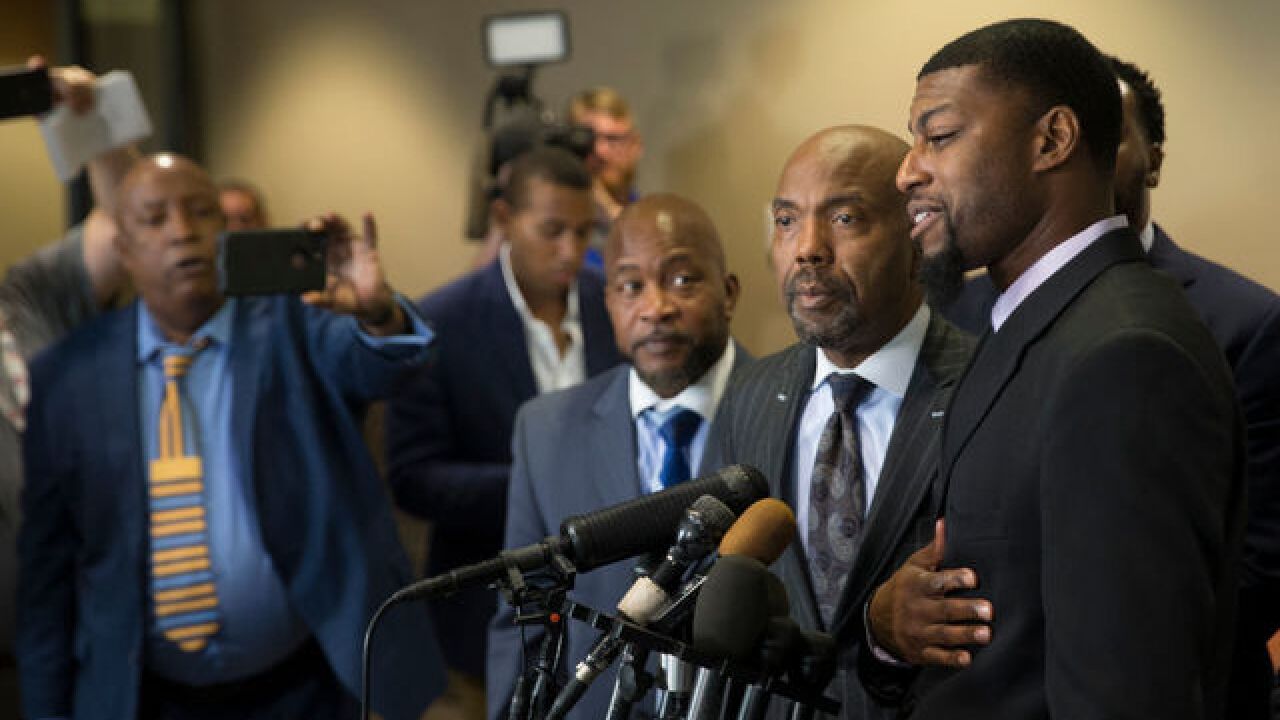 A white ex-police officer was convicted of murder Tuesday for fatally shooting an unarmed, black 15-year-old boy while firing into a car packed with teenagers in suburban Dallas, marking a rare guilty verdict in a police shooting case.

Dallas County jurors were not swayed by Roy Oliver's claim that he feared for his partner's life when he fired into the vehicle as it drove away from a large house party in Balch Springs. The gunfire killed Jordan Edwards, who was sitting in the front passenger seat.

Gasps echoed around the courtroom as the verdict was read. Edwards' relatives sobbed and hugged prosecutors, and waved their hands in the air and proclaimed "Thank you, Jesus!" after the jury left.

His father, Odell Edwards, briefly spoke outside the courtroom before heading back in to begin listening to the sentencing phase of the trial. He said he was thankful for the jury's decision and felt like jumping for joy but was able to retrain himself.

"I just want to say I'm happy, very happy," he said, adding that it's "been a long time" since he felt that way.

Oliver and his partner were responding to a report of underage drinking at a house party when the shooting occurred in April 2017.

Balch Springs police initially said the vehicle backed up toward officers "in an aggressive manner," but police later said that bodycam video showed the vehicle was moving forward as officers approached.

Oliver was fired days after the shooting.

Oliver testified during his trial that he opened fire after seeing the car move toward his partner. But his partner told jurors he didn't fear for his life.

Experts say it's extremely rare for police officers to be tried and convicted of murder for shootings that occurred while they were on duty. Not including Oliver, only five non-federal police officers had been convicted of murder — and four of those were overturned — since 2005, according to data compiled by criminologist and Bowling Green State University professor Phil Stinson.

Ahead of the trial, experts noted that securing convictions against officers were challenging, in part because criminal culpability in on-duty shootings is subjective and jurors are more inclined to believe police testimony.

Oliver also was found not guilty on two lesser charges of aggravated assault stemming from the shooting. Jurors deliberated for two days before reaching the verdict.

"This was a long fought battle," said Daryl Washington, an attorney representing Odell Edwards in a civil lawsuit filed in the death. "We are just happy ... that Roy Oliver is gonna have to do his time for taking Jordan's life. What he did on that night should have never happened."

Washington said black children and teenagers across the country can now walk around a little safer because officers know they will be held accountable.

In closing arguments, defense attorneys told the jury they needed to evaluate the circumstances from Oliver's viewpoint and from what the former officer knew at the time. But prosecutors described Oliver as out of control and looking for a reason to kill. They argued that his firing into the car wasn't reasonable.

The shooting came after Oliver and his partner, Tyler Gross, had broken up a large house party following a report of underage drinking. Both officers were inside the residence when they heard gunfire outside and responded. Authorities later determined the shots were fired near a nursing home in the area.

Oliver retrieved his rifle and went toward Gross, who was ordering the car carrying Edwards to stop. Oliver testified that he saw the car back up and stop for a second before moving forward and going toward Gross.

Testifying in his own defense, Oliver told the jury the car was about to hit his partner. Oliver said he felt he had no other option but to fire.

Gross, however, testified that he did not fear for his life and never felt the need to fire his weapon. He also said he didn't feel like the vehicle was trying to hit him.

Prosecutors said Oliver fired after the vehicle passed Gross. Investigators also said no guns were found in the teens' vehicle.
___
For the latest developments on this story: https://apnews.com/c6f1aebf73aa4cb8bebb65c2aac6c3ce