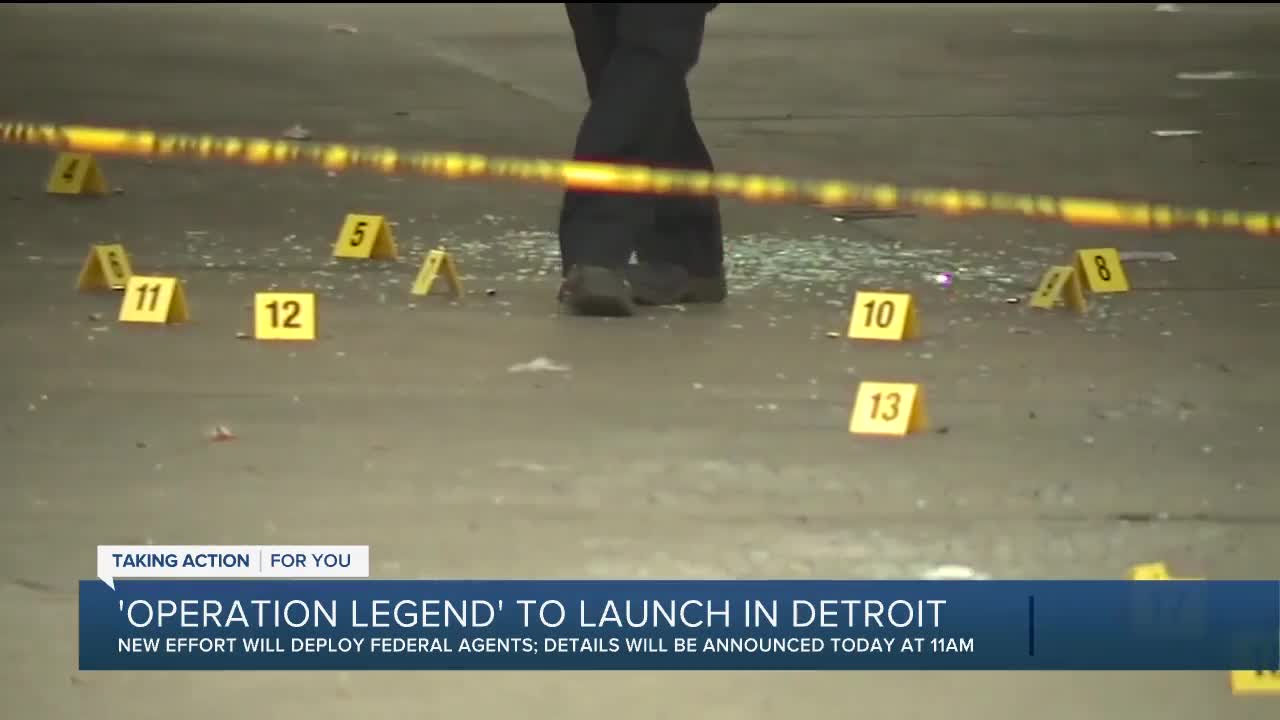 'Operation Legend' to launch in Detroit 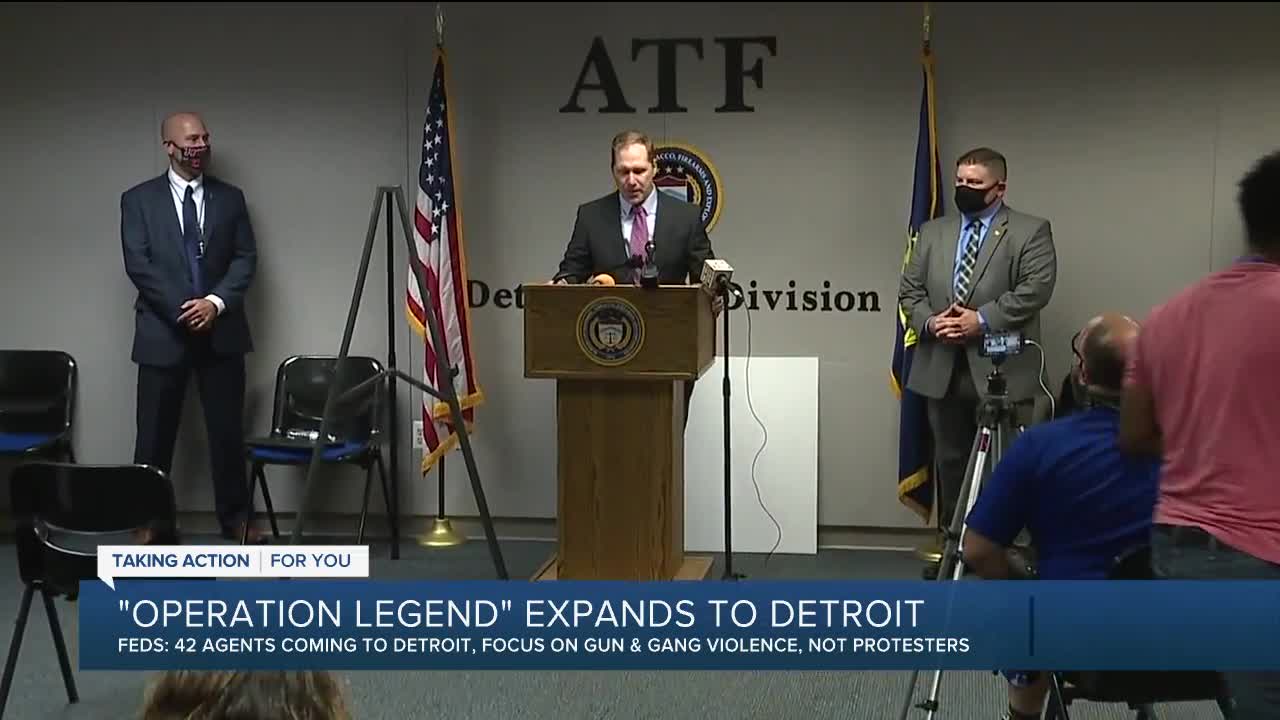 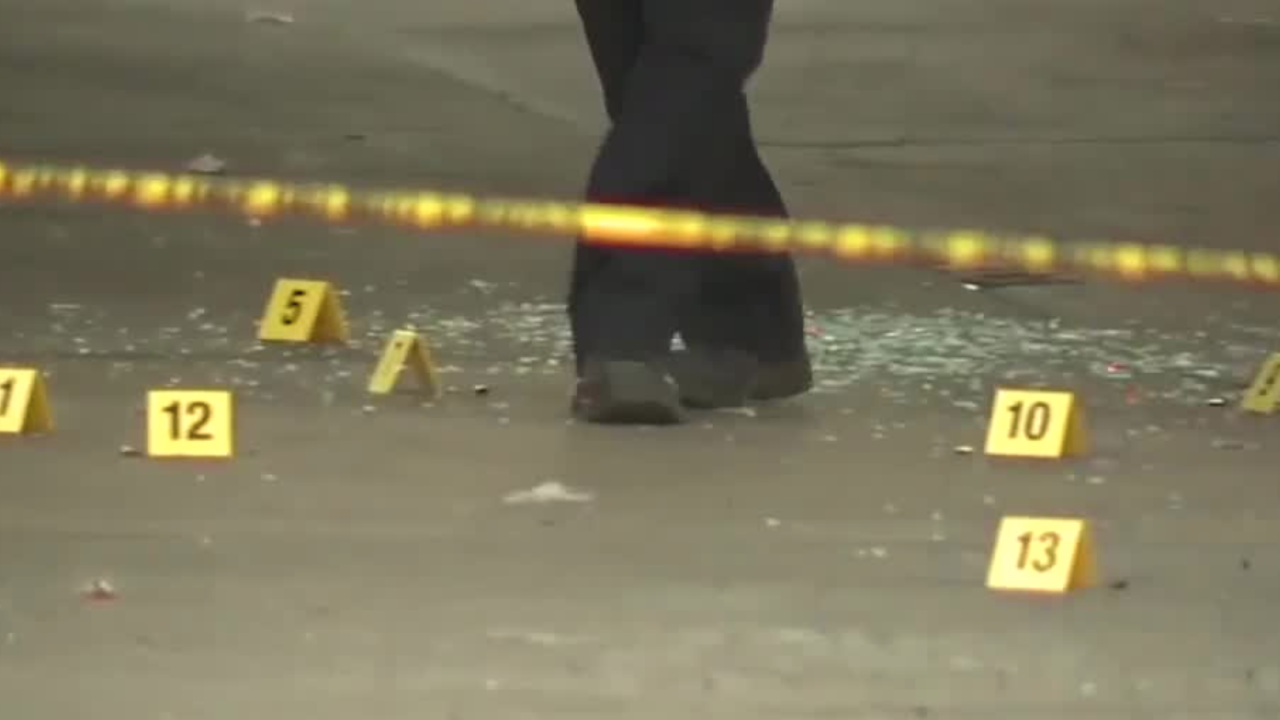 DETROIT (WXYZ) — Federal officers are coming to Detroit. The U.S. Department of Justice announced Wednesday that dozens of agents from the ATF, FBI and DEA will be in the city as part of "Operation Legend."

This is President Trump’s initiative to curb violence in several cities, including Chicago and Albuquerque.

According to the DOJ, there will be 42 agents from the departments in the city, and an additional 10 ATF agents in Detroit have been re-assigned to work on violent gun crimes.

U.S. Attorney for the Eastern District of Michigan Matthew Schnieder will work with the agents and Detroit Police Department to combat gun and gang violence.

He clarified that the initiative is not aimed at interfering with Black Lives Matter protests in Detroit.

"There are no federal troops coming to Detroit or any other area in Michigan to interfere with protesters," he re-iterated.

"Some people in our state have falsely and recklessly stated that the efforts of our partnership to protect our community from violence is instead a secret effort to stop the right of Michiganders to protest."

What Detroit officials say they do not need, is help with nightly protests. City leaders say the federal government wants to help the city fight violent crime, not patrol streets in search of protesters.

According to the DOJ, there will be $1.4 million to support Operation Legend and $2.4 million from the COPS office has been made available to DPD to hire 15 officers.

Chief Craig says Operation Legend is an expansion of another initiative.

"And to say do I welcome them, I welcomed them in December and so any more to come in and help us eradicate violence I welcome it," Chief Craig said.

Trump announced an expansion of the initiative to curb violence in cities like Cleveland, Milwaukee and Detroit.

"While others want to defund, defame and abolish the police, I want to support and honor our great police," said the president.

City officials are welcoming the move to help get illegal guns off the street.

Detroit is currently experiencing a significant increase in violent crime, with homicides currently up 31% and shootings up 53%, according to the DOJ.

Though many people are speaking out against it.

“No, we don’t need anybody to come help us. And Chief Craig is doing a beautiful job," said resident Michael Allen.

“More police is in Detroit is not what we need," said Lloyd Simpson, an organizer with Detroit Will Breathe. "We need resources from the federal government not police brutality, not federal agents running around like vigilantes in our neighborhoods, that’s not what we need.”

Another resident supports the move to get guns off the street but is wary about federal officers in Detroit.

“I have confidence in the American system. I hope that the right things will be done," said Chris Casteel.

As far as results in other cities, this initiative is in Kansas City and our sister station there reports more than 50 arrests attributed to Operation Legend.

Watch the press conference below: