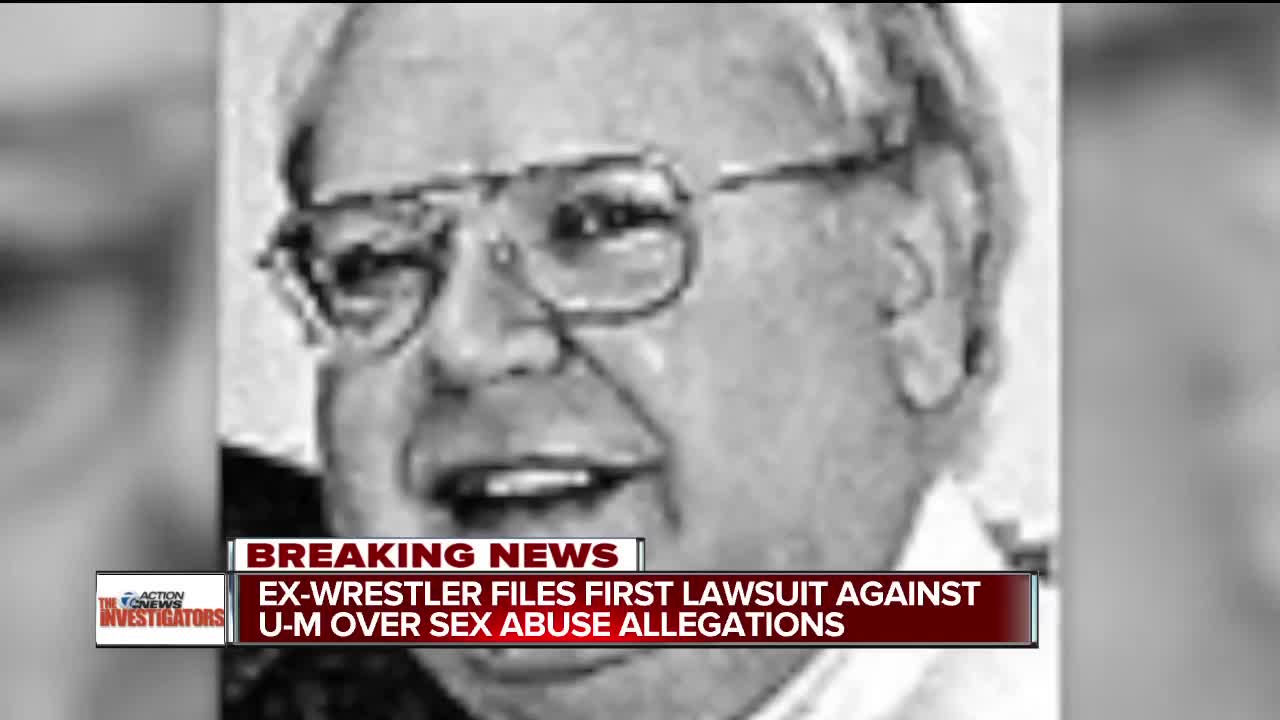 The first lawsuit has been filed against the University of Michigan over the alleged sex abuse involving late Dr. Robert Anderson.

(WXYZ/AP) — The first lawsuit has been filed against the University of Michigan over the alleged sex abuse involving late Dr. Robert Anderson.

The lawsuit, filed in federal court, is from a plaintiff who was an undergraduate student with an athletic scholarship at the university from 1984 to 1989 and was a member of the wrestling team. It was filed by The Mike Cox Law Firm on behalf of the plaintiff. It's expected that 10 more lawsuits will be filed.

The lawsuit alleges that the university was warned several times that Anderson was a predator – the first being in 1968 – by an undergraduate student. The lawsuit said that Gary Bailey filed a written complaint with the university alleging Anderson had him drop his pants and felt his genitals. The lawsuit also said no one followed up on his allegation against Anderson.

It alleges that the university was once again warned in 1975 by an undergraduate student athlete, and again in 1979.

The lawsuit said that U of M acknowledged in 1979 that Anderson was a predator but determined that he would be demoted to the athletic department – where he worked until 2003.

"The demotion gave Anderson free reign to abuse hundreds of male athletes like the Plaintiff with impunity," the lawsuit states. "Anderson treated members of the wrestling, football, and hockey teams for every medical ailment, complaint, and injury as their UM-assigned internist. He served as their first medical point of contact no matter the injury or ailment at issue, including everything from a cold to the flu to broken bones."

When asked for comment on the lawsuit, a spokesperson for the school issued the following statement:

We can't comment other than to deeply apologize for the harm caused by Robert E. Anderson. We recognize the enormous strength and courage it takes for survivors to come forward and share their stories.

The university continues to encourage those who have been harmed by Robert E. Anderson or who have evidence of his misconduct, to come forward. It’s important that the University of Michigan hear your voices.

We also want those who have been affected by Robert Anderson to have access to confidential support and counseling. The university is offering counseling services at no personal cost to anyone affected by Anderson.

Anderson was a former director of University Health Service and a former athletic team physician who worked at the university from 1968 until his retirement in 2003. He died in 2008.

An investigation began in July 2018 when a former student athlete wrote to Athletic Director Warde Manual to detail abuse during medical exams by Anderson in the early 1970s, the university says.

During the investigation, the university says it identified dozens of people who described incidents of sexual misconduct by Anderson. Now, the university is asking anyone with additional information to come forward.

“The allegations that were reported are disturbing and very serious,” said President Mark Schlissel in a news release. “We promptly began a police investigation and cooperated fully with the prosecutor’s office."

A review by the Washtenaw County Prosecutor's Office said that the review of allegations began in April or May of 2019 and concluded in the fall of the same year.

The former patients describe sexual misconduct and unnecessary medical exams, the university says. The exams reportedly took place in the 1970s, with at least one incident reported in the 1990s.

“As part of our commitment to understanding what happened and inform any changes we might need to make, we now are taking the next step to reach out to determine who else might be affected or have additional information to share. Every person in our community should expect to feel safe and supported.”

The Washtenaw County Prosecutor's Office determine that no criminal charges would be authorized.