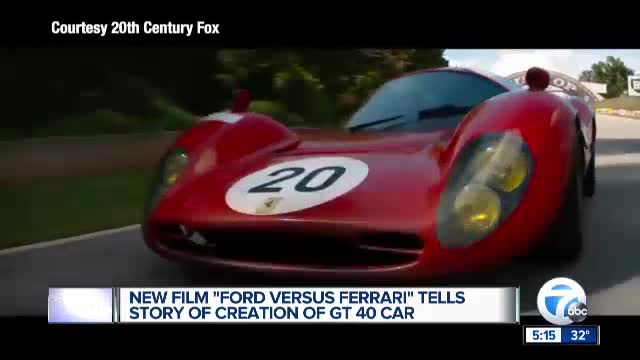 There is an interesting story in Ford Motor Company’s history when Henry Ford II tried to buy Ferrari.

When the deal fell through, Ford decided to make a car that’s just as good and fast as the Italian sports car. He wanted to use it to beat Ferrari in the 24 Hours of Le Mans, the world’s oldest sports car race.

That’s what the film ‘Ford v Ferrari’ is all about.

While Ford Motor Company was not involved in the production of the movie, the company unveiled its archives collection to the media today.

“Just gives me goosebumps. I was there in 1966. I know what it was like and to see all this is just remarkable,” said Edsel Ford II.

He hasn’t seen the movie yet, but he doesn’t have to.

Ford remembers when his father, Henry Ford II, tried to buy Ferrari in 1963, but the deal fell through.

That’s when Ford decided to ‘one up’ the Italian car maker.

Ted Ryan is Ford’s archivist and he is displaying items that tell the story behind the ‘Ford v Ferrari’ movie. Some of the items include the purchase agreement when Ford wanted to buy Ferrari and the telegram announcing negotiations falling through.

That’s when Ford created a team to build a car that could beat Ferrari in the famous 24-hour Le Mans race in France.

They also displayed a GT40 that was in the movie, which is a replica.

“Except for one thing, on the side of it it says GT40 instead of Ford because Ford didn’t actually participate with the filming so they couldn’t use our name on the car,” Ryan explained.

That’s when Ford gave his team one more chance.

Ryan said,“Hand wrote on a card ‘you better win’ and that was going to be their last shot.”

They have the winning trophy to prove it!

Edsel Ford is excited to see Hollywood’s take on the incredible team behind the GT40.

“So, I’m anxious to see how they are portrayed,” he added.

The movie stars Christian Bale and Matt Damon. It comes out in theaters November 15th.