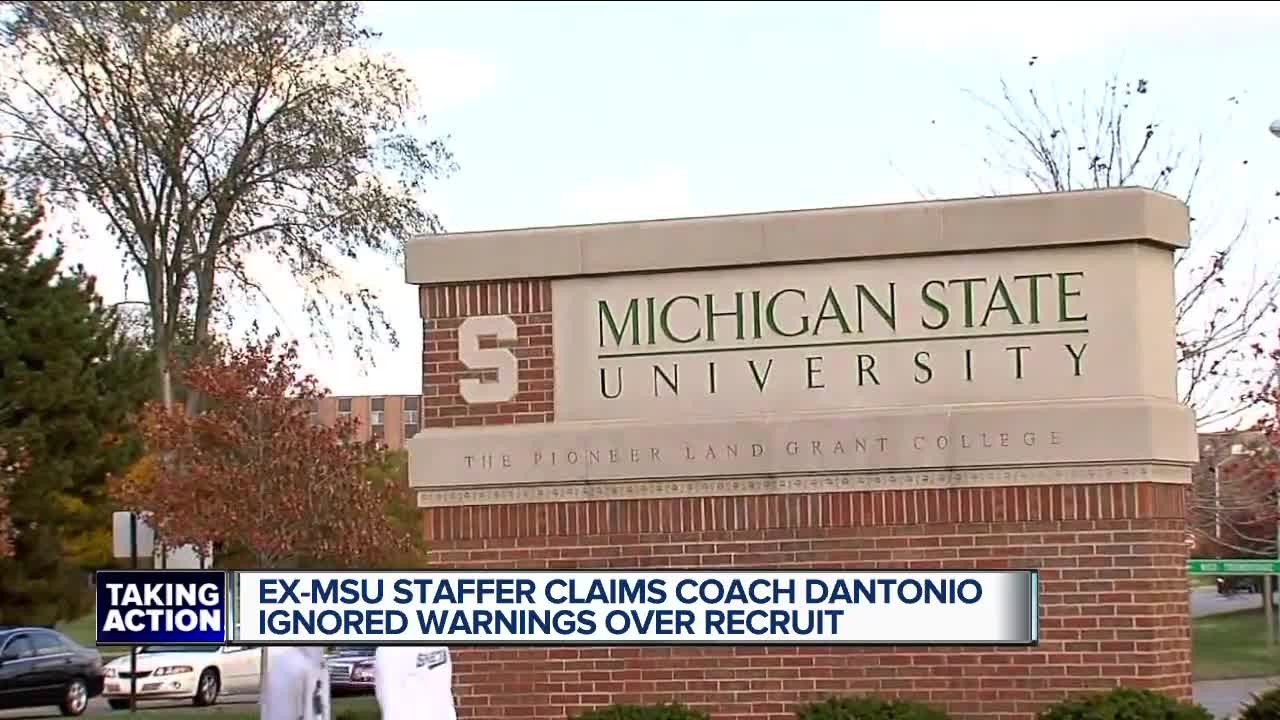 New allegations against Michigan State Football Coach Mark Dantonio emerged Thursday in a lawsuit filed by one of his former employees.

(WXYZ) — New allegations against Michigan State Football Coach Mark Dantonio emerged Thursday in a lawsuit filed by one of his former employees.

Curtis Blackwell is the former director of recruiting for Michigan State. His contract with MSU wasn't renewed after police said he interfered with an investigation into rape allegations involving players back in 2017.

Blackwell has since filed a wrongful termination lawsuit, and in a deposition released Thursday he said under oath that Dantonio was cautioned by multiple MSU assistant coaches not to sign a recruit with a history of criminal allegations.

Dantonio, Blackwell alleges, brought the player in anyway. A year later, he was charged and ultimately convicted of raping an MSU student.

The deposition is part of Blackwell's efforts to have Dantonio deposed for his lawsuit, which MSU is currently resisting.

7 Action News has reached out to MSU for comment, but so far have not heard back.

We did received the following statement from Mark Dantonio's attorney:

While it is the University’s policy to deal with litigation in court, and not the press, the recent publicity efforts by Mr. Blackwell and his attorney warrant a brief response.

Mr. Blackwell’s lawsuit concerns his allegations that his contract was not renewed because he refused to co-operate with investigations being conducted by the MSUPD and a law firm hired to evaluate the MSU football program’s compliance with sexual assault reporting policies. The lawsuit has nothing to do with the recruitment or actions of any student athletes, including Auston Robertson.

Mr. Blackwell’s publicity seeking efforts to nevertheless inject this and other irrelevancies into this lawsuit seek to deflect from what actually happened, and were already rejected by the court. We have filed a motion for protective order consistent with the court’s earlier ruling.

Coach Dantonio has been more than willing to testify and explain the reasons he decided to not further extend Mr. Blackwell’s contract. This could have been accomplished months earlier, before the onset of the football season, and dates were provided but not accepted by Mr. Blackwell’s counsel. We now expect the court to address the timing and parameters of his deposition in response to our motion.

Tuesday at 6 p.m. on Action News, Blackwell will sit down with Carolyn Clifford about the lawsuit against MSU, his experience as part of the football program and being handcuffed on campus.