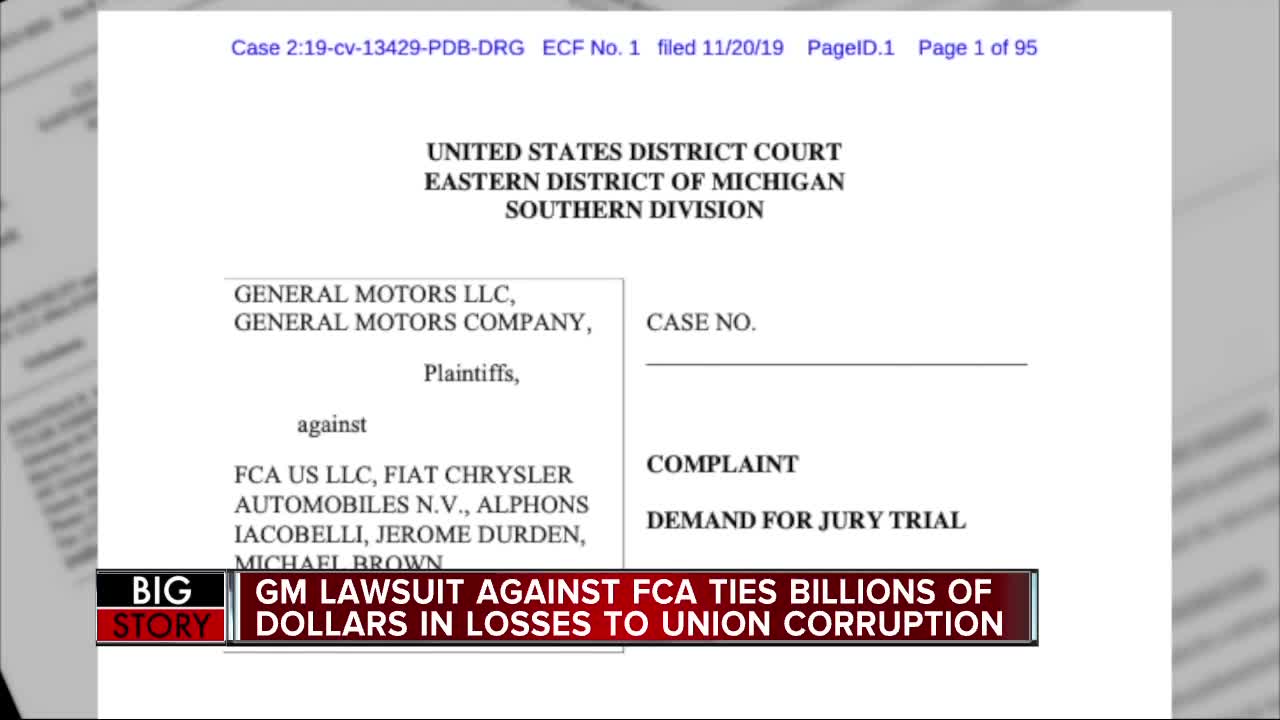 General Motors has filed a lawsuit against Fiat Chysler Automobiles claiming that FCA engaged in corrupt bargaining with the UAW. 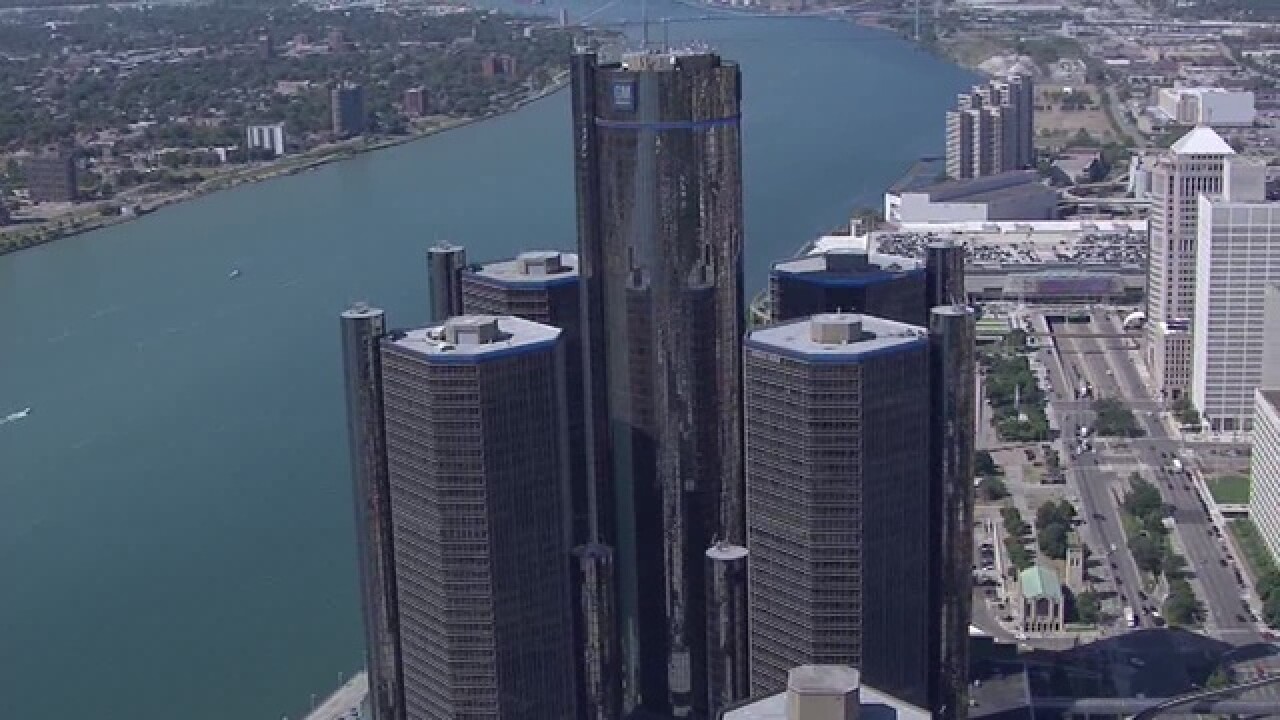 (WXYZ) — General Motors has filed a lawsuit against Fiat Chysler Automobiles claiming that FCA engaged in corrupt bargaining with the UAW.

According to a press release from GM, that corrupt bargaining came out in "clear admissions of wrongdoing made by former FCA executives who have pleaded guilty in an ongoing federal corruption probe."

The lawsuit, filed in Detroit federal court on Wednesday, is against the company and former FCA executives. It also mentions late FCA CEO Sergio Marchionne.

One of the major claims in the lawsuit is that Marchionne authorized more than $1 million in bribes to the UAW which GM claims was an attempt to force a merger with GM.

GM alleges that from 2009 through at least 2017, "FCA group, through a pattern of racketeering activity, acquired and maintained an interest in and/or control of the UAW, and in particular its decisions and actions regarding CBAs," which are collective bargaining agreements.

"FCA was the clear sponsor of pervasive wrongdoing, paying millions of dollars in bribes to obtain benefits, concessions, and advantages in the negotiation, implementation, and administration of labor agreements over time," a press release from GM reads.

“This lawsuit is intended to hold FCA accountable for the harm its actions have caused our company and to ensure a level playing field going forward,” GM Executive Vice President and General Counsel Craig Glidden said in a release.

In the suit, it includes mention of the guilty plea from former FCA VP of employee relations, Alphons Iacobelli, as well as other former employees who have taken plea deals including Jerome Durden and Michael Brown.

GM also claims that Marchionne authorized bribes to General Holiefield, who oversaw the relationship between the UAW and FCA.

"Alphons Iacobelli has admitted to this scheme and currently is in prison for these illegal acts. Michael Brown, Director of Employee Relations at FCA and Co-Director of the NTC, likewise has admitted to this scheme. Marchionne authorized these bribes, and additional things of value to UAW officials, so that FCA could more effectively compete and thrive against GM and, as detailed below, ultimately attempt to force a merger with GM," the lawsuit reads.

General Motors claims that through these bribes, Fiat Chrysler corrupted the implementation of the 2009 collective bargaining agreement with the union, as well as the negotiation and implementations of the CBAs in 2011 and 2015.

According to the lawsuit, GM will use any damages that it recovers from the suit "for investment in the United States to grow jobs and for the benefit of its employees."

FCA released the following statement: "We are astonished by this filing, both its content and its timing. We can only assume this was intended to disrupt our proposed merger with PSA as well as our negotiations with the UAW. We intend to vigorously defend against this meritless lawsuit and pursue all legal remedies in response to it."

Fiat Chrysler Automobiles (“FCA” NYSE: FCAU /MTA: FCA) confirms that it will defend itself vigorously against the lawsuit filed yesterday by General Motors. FCA believes General Motors’ claims are nothing more than a meritless attempt to divert attention from that company’s own challenges.

This astonishing ploy comes at a time when FCA is proving itself to be an ever more formidable competitor that continues to create significant value for all its stakeholders through the successful implementation of its long-term strategy. This includes the proposed merger with PSA, which itself completed the successful turnaround of the European businesses it acquired not long ago from General Motors.

FCA will deal with this extraordinary attempt at distraction through the appropriate channels and will stay focused on continuing to deliver record results while realizing an exciting vision for the future of the industry. FCA is confident that it will prevail in defending itself against these claims in court and will also pursue all available remedies in response to this groundless lawsuit.

In a statement, the UAW said, "“The UAW is focused on continuing to implement ethics reforms and greater financial controls to make sure the misconduct which has been uncovered will never happen again. Mr. Iacobelli worked for both FCA and General Motors, and he is currently in prison for his crimes, which include the misuse of Joint Program funds. As to the collective bargaining agreements negotiated with FCA while Iacobelli was an FCA manager, we are confident that the terms of those contracts were not affected by Iacobelli’s misconduct, nor that of any UAW officials involved in the misuse of Joint Program funds at FCA. Those contracts, which were ultimately ratified by our membership, were negotiated with the involvement of both local and international representatives and the process had multiple layers of checks and balances to ensure their integrity. That said, the fact that these issues can cause doubt about the contracts is regrettable. The UAW leadership is absolutely committed to making whatever changes are necessary to ensure on our end the misconduct that has been uncovered will never happen again.”

Read the entire lawsuit below.

Gm vs. Fca Lawsuit by WXYZ-TV Channel 7 Detroit on Scribd