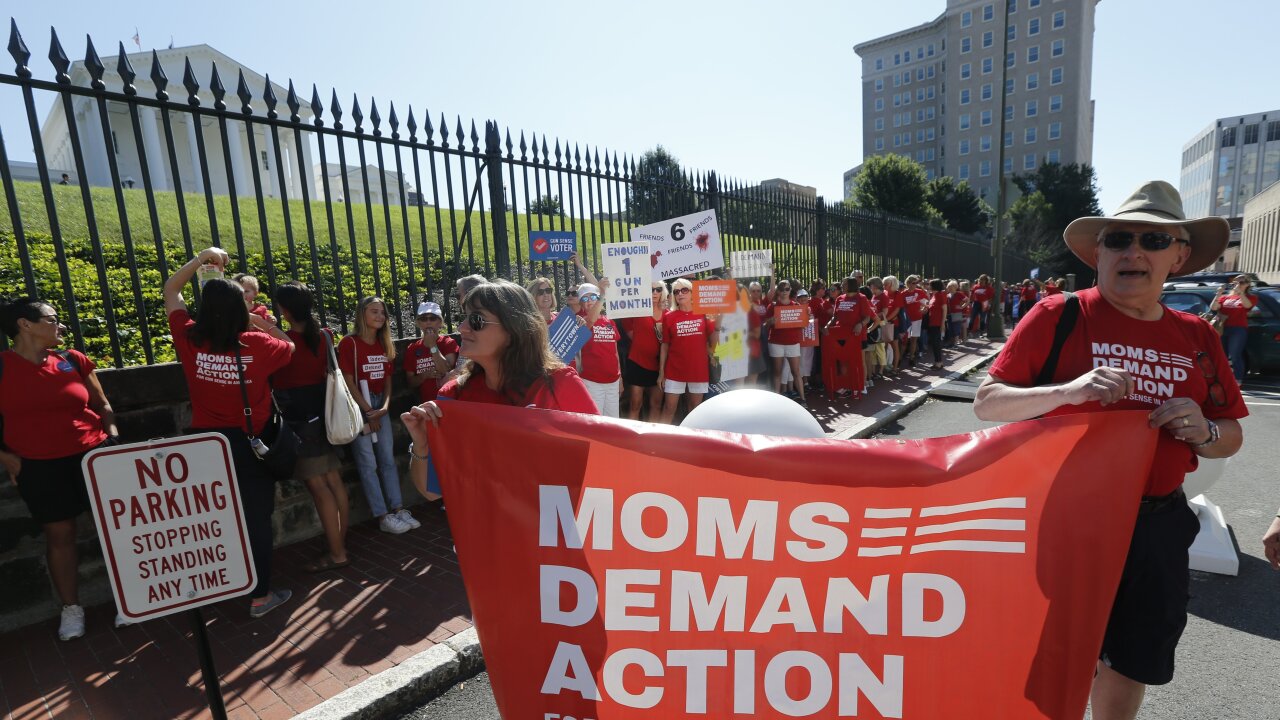 Steve Helber/AP/Steve Helber/AP
While Congress is on recess, two gun control groups are mobilizing to increase the pressure on senators to pass legislation in the wake of two mass shootings in Dayton, Ohio, and El Paso, Texas, earlier this month.

(CNN) — While Congress is on recess, two gun control groups are mobilizing to increase the pressure on senators to pass legislation in the wake of two mass shootings in Dayton, Ohio, and El Paso, Texas, earlier this month.

Everytown for Gun Safety and Moms Demand Action announced Thursday that they would hold rallies in all 50 states and spend nearly $1 million on ads against a handful of Republican lawmakers this weekend.

"The American people want action on gun violence, and we're saying so in a voice loud enough for every senator to hear," John Feinblatt, the president of Everytown, said in a news release Thursday. "We're unleashing the full power of our grassroots movement and leading our most aggressive August spending effort ever, to ensure the Senate gets the message and passes background checks and a strong federal 'Red Flag' law."

Moms Demand Action founder Shannon Watts said she expects more than 100 rallies on Saturday and Sunday in all 50 states. The pressure campaign is in direct response to the recent shootings in Dayton and El Paso, and another in late July at a popular garlic festival in Gilory, California, according to Watts.

"Having the August recess to hold these rallies and also to hold in district face-to-face meetings with senators and their staff is incredibly valuable and important and we're going to going to take advantage of it," Watts told CNN Thursday.

Another $385,000 will be spent on cable and local TV ads against McConnell, Gardner, Rubio, Scott and Portman.

Watts said the states where the ads will run are ones where GOP lawmakers "are on the fence or should listen to us because they have taken a position that does not align with that of their constituents."

The effort from Everytown and Moms Demand comes as the National Rifle Association, its biggest adversary, has been noticeably absent from applying pressure on Capitol Hill allies to hold fast against strong forces for gun reform.

The NRA's top lobbyist, Christopher Cox, who built decades of relationships with congressional Republicans, resigned in June. The organization also broke with its long-time advertising partner, Ackerman McQueen, which helped craft its media and communications response to mass shootings.

CNN has reached out to the NRA for comment.

The Democratic-controlled House passed a universal background check bill in February, but the measure has not been considered by the Republican-led Senate. President Donald Trump last week expressed an openness to background checks.

Speaking to a Kentucky radio station last week, McConnell said that the Senate will put the issues of background check legislation in addition to "red flag" laws "front and center" when the body reconvenes after its summer recess, but it will not return early as Democrats are demanding.

"We expect the Senate to make this legislation a priority. If they don't act, there will be hell to pay in the upcoming elections," Watts warned. "The momentum we have on our side isn't going to dissipate."

A mid-July NPR/PBS NewsHour/Marist poll found that 89% of Americans considered it a "good idea" to implement background checks for gun purchases at gun shows or other private sales, with a nearly nonexistent partisan divide: 96% of Democrats, 89% of independents and 84% of Republicans called it a good idea.

CORRECTION: This story has been corrected to properly state how many rallies are being held this weekend.