High school football players, coaches prepare for a season unlike any other 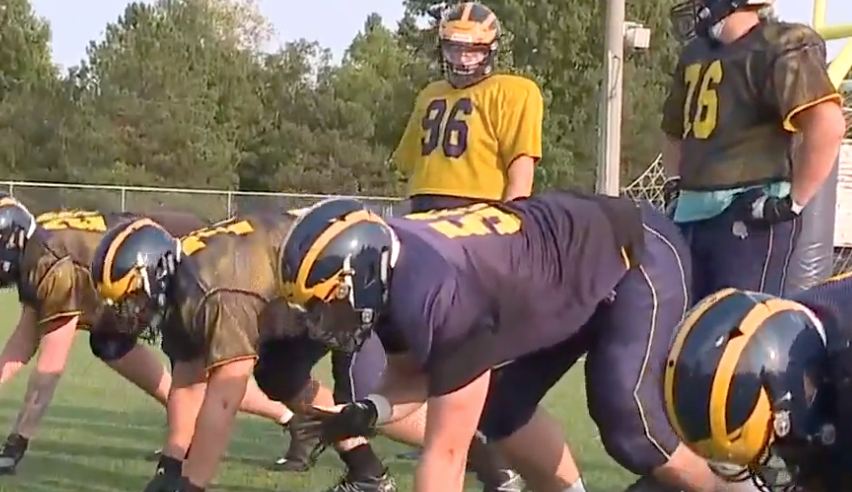 High school football will begin in Michigan this week with changes amid the COVID-19 pandemic.

(WXYZ) — After a lot of back and forth and much debate, Michigan's shortened high school football season kicks off Friday. Clarkston will face Southfield A & T at Southfield at 7 p.m.

This six-game season, one in which every team will make the playoffs, comes with plenty of new rules and regulations in an attempt to compete as safely as possible during a global pandemic.

Chief among the new rules are those put in place under Gov. Whitmer's executive order, which limits the number of spectators that attend games to two people per game participant (as long as the region remains in phase four of re-opening) and also requires football players, coaches, trainers, and fans to wear face coverings at all times.

“We have to now, so you can’t really complain about something you have to do," said Clarkston senior lineman Garrett Dellinger. It's a mindset he's relying on during this unique season, which almost didn't happen.

“We really didn’t think we were going to play. And we were still practicing what they allowed us," said head coach Kurt Richardson. “Once we found out we had a season, it was like Christmas Day.”

Only instead of presents under the tree, teams like the Wolves were handed a list of new rules.

The governor's mask mandate has been one that players feel is especially challenging.

"I’m not gonna lie it’s not fun. It gets really hot in there," said fellow senior lineman for Clarkston, Rocco Spindler.

“You have to wear a mouth piece so it’s hard to also wear both. But once you get used to it, it’s doable," Dellinger said. He's also cognizant of the fact that younger players are watching Varsity, and that he's setting an important example by following the rules.

"As long as we’re doing the right thing they usually catch on quickly. It’s the energy out here that really sets the tone," Dellinger told Action News.

The MHSAA also released return to play guidelines that address everything from transportation to locker rooms to ticket sales.

"Schools should strongly consider using a digital ticket or cashless system. Schools must work together to develop a distribution plan for the limited amount of tickets available per game. If a physical ticket is used, each school should consider conducting a pre-sale, with no on-site ticket sales – only tickets, not money, is collected at the event site," the MHSAA guidelines state.

For Clarkston's game in Southfield, athletes will be provided a district bus, however competition transportation will vary district to district.

"The use of buses is a local school district decision. Cleaning and ability to physical distance should be part of the decision. Schools should also consider length of trips when determining the season schedule. When feasible, consider having parents drive athletes to and from games," the MHSAA guidelines state.

Concessions for outdoor sporting events are allowed under the MHSAA guidelines -- but social distancing must be practiced. Indoor concessions are not allowed currently.

The governor's mask mandate doesn't apply to athletes in all sports: cross country, tennis, golf, swimming & diving are except.