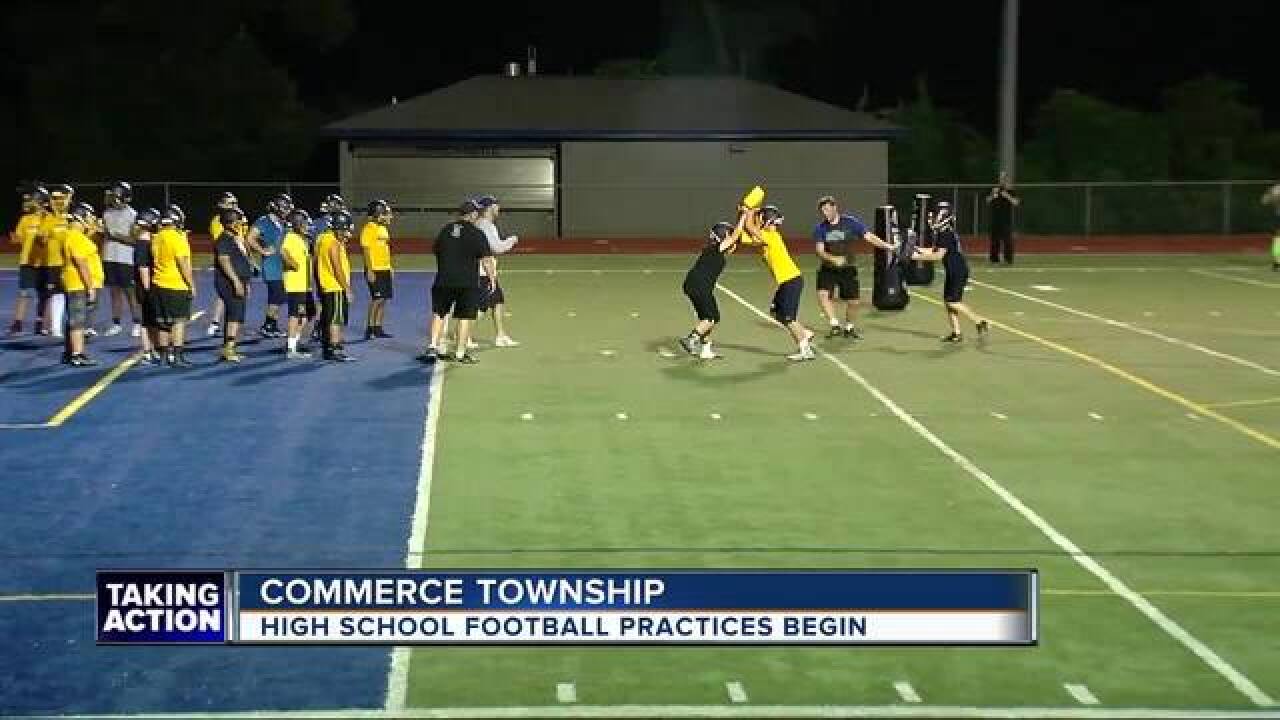 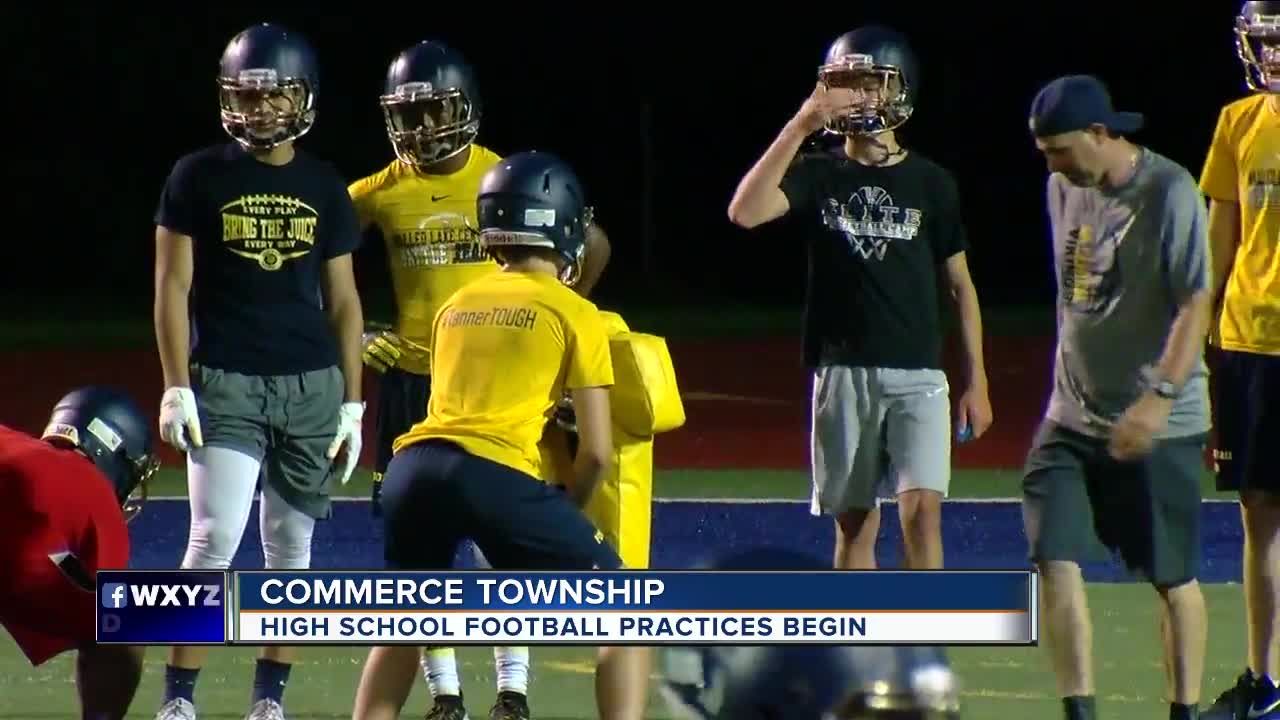 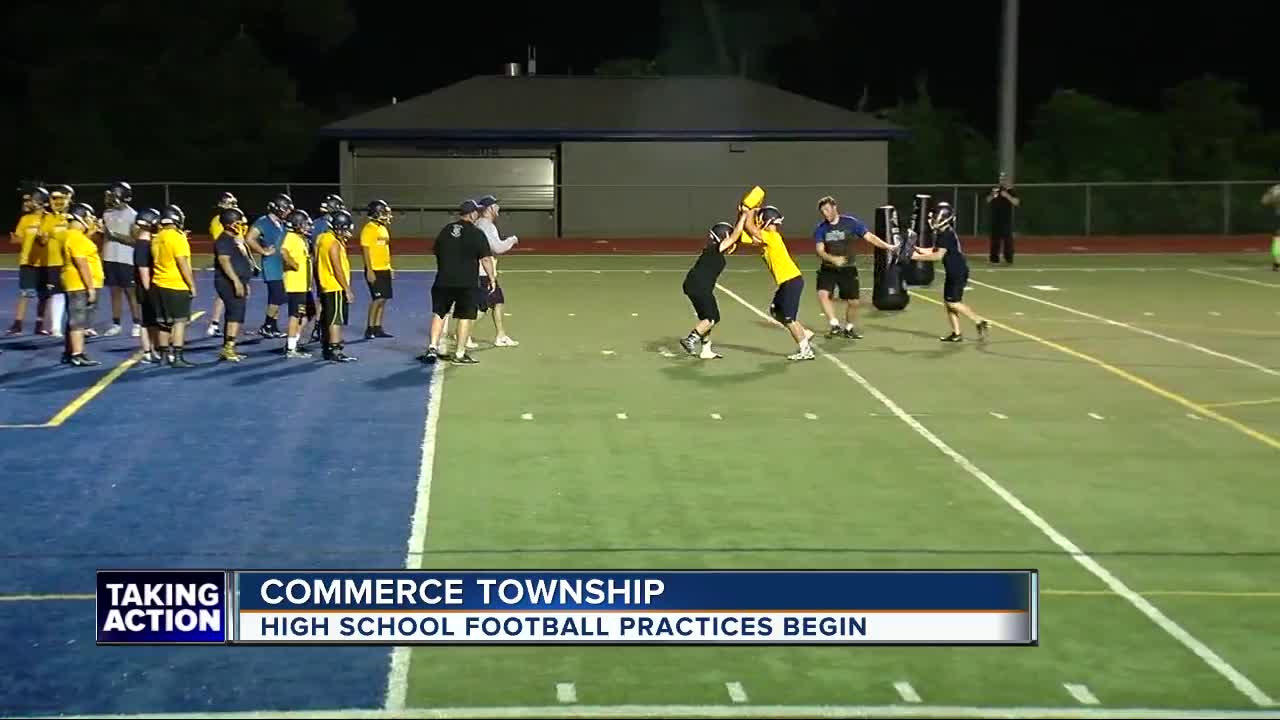 Beginning August 6, schools across Michigan are allowed to return to football practice per Michigan High School Athletic Association rules — the first practices for all other fall sports return on August 8.

At Walled Lake Central High School the occasion was marked with the 13th straight year of Midnight Madness, a tradition of players taking the field at 12:01 a.m. to kick off the first practice of the season.

“Kids aren’t going to be able to sleep so we bring them out here and they get after it,” said head football coach Bob Meyer. “One of the bonuses is that it’s 72 degrees outside, not 92.”

Beating the heat is more important than ever as MHSAA has become laser-focused on player safety, thanks to new research. Coaches are being introduced to new information on good hydration in sports that goes beyond water breaks during practices — there’s also training on minimizing the risk of heat stroke. Schools are directed to start tracking the heat index once the outside temperature hits 80 degrees.

There is also a continuing focus on concussions and student-athletes.

This year, football players at Walled Lake Central were given baseline concussion testing so that the team can compare notes if a student suffers a concussion. The testing isn’t the only solution, but doctors at DMC Sports Medicine describe it as an extra tool in their toolbox when it comes to treating patients.

The test measures an athlete’s short and long-term memory, visual motor speed and reaction time. These results are recorded, and in the event an athlete suffers a concussion, a post-injury test is conducted and the results are compared to the baseline test to help determine the degree of impairment before a decision can be made for them to return to their sport.

“It gives us more information and a allows us to individualize treatment plans,” said Brandon Kakos, MD. “Over the course of a few hours, days or even weeks a diagnosis can change and with that, your treatment will change, as well.”

Dr. Kakos said it’s important that we pay attention to concussions and the role that they play in sports, but he also noted that there’s a difference between caution and banning sports. His goal is to educate parents so that they understand the steps that are necessary for parents to take to, but also to not scare athletes away from sports.

While technology is changing rapidly when it comes to concussions, the best line of defense is communication. While baseline testing is helpful coaches, parents and teammates are the most likely to recognize changes in behavior if a concussion happens on the field. Dizziness and nausea are often linked to concussion as the main symptoms, but mood changes and emotional changes occur sometimes too. Dr. Kakos said that recognizing changes in personality can also help doctors react quicker, because the sooner a concussion is diagnosed the better the treatment plan can be tailored to someone’s needs.

As for the football players at Walled Lake Central HS, they’re simply excited to be back on the field.

Joey Brincat, a senior linebacker, told 7 Action News that it’s been a long wait to return to the practice field. Last year, the team lost in the playoffs to Lakeland, and this year’s week one matchup pits the two teams against one another at the Big House in Ann Arbor for a special fundraiser game — to call the mood at the practice facility “exciting” would be an understatement.

“They beat us in the playoffs pretty bad last year,” said Brincat. “It’s going to be a good week one game this season, that’s all I’ve got to say.”