How long should a utility pole be left in your yard? 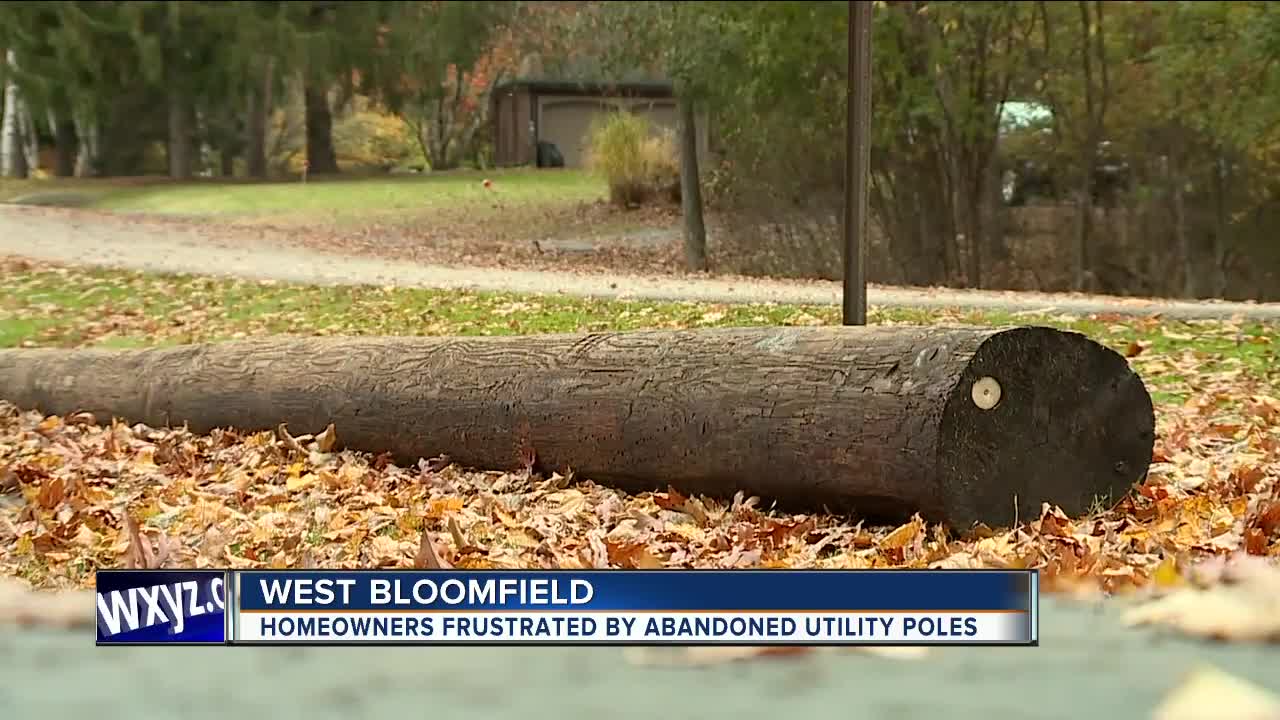 People in multiple subdivisions in West Bloomfield say they are tired of storing poles against their will for seven months, or even more than a year. They say they have tried to get answers from DTE, but had no luck.

WEST BLOOMFIELD, Mich. (WXYZ) — How long would you put up with having a utility pole in your yard?

People in multiple subdivisions in West Bloomfield say they are tired of storing poles against their will for seven months, or even more than a year. They say they have tried to get answers from DTE, but had no luck.

“Since last year, it is lying there,” said Zahara Begum of the pole down the street in the Stonebridge Subdivision off Maple Road in West Bloomfield Township.

Residents are now fed up with waiting for it to be cleared.

“No one is taking care of it,” said Raj Katrajadda.

They say they believe the pole was forgotten. Their subdivision association says it has called DTE repeatedly, but the pole remains. Hiba Zyne, a 9-year-old who lives in the subdivision, says the pole should not be there on Halloween.

“With trick or treating, I think somebody will trip,” Zyne said.

And this is not the only subdivision in the area dealing with this.

Please tell me what you think. How long would you say is acceptable for the power company to leave a pole on your property? This one was here for more than a year, until I made some calls. pic.twitter.com/ztQ2yhI9MO

Story airs on WXYZ at 6. How long would you say is too long for a utility pole to be stored in your yard? pic.twitter.com/25UBTolTU8

“One day I drove up and I had a pole in my yard,” said Shefali Mihelich, who lives the Sagamore Estates Subdivision off Walnut Lake Road in West Bloomfield.

That was in March. All summer her husband mowed around it, and it caused a mess, blocking water from reaching a drain. She says she reached out to DTE and got no response.

“I am not the only person in the neighborhood," Mihelich said. "We have two logs down the road."

7 Action News reached out to DTE and the company send out a worker to investigate. He says this job should have been taken care of by now, but the contractor says it got delayed due to other emergency jobs. He called the contractor and told him to make sure it was taken care of in the coming days.

Mihelich says she would like for DTE to let property owners know they own a pole when it is dropped off, and to communicate what is going to be done, and approximately when. She understands utility companies have to leave poles somewhere so they can ensure everyone has power, but believes communication is essential. She says she had no way to know for sure that the pole belonged to DTE, until the worker confirmed it is tagged as belonging to DTE.

“Give them a timeline as to when it will be moved,” she requested of DTE.

DTE says that recent storms have created a lot of extra work, and crews are juggling many tasks. They are delaying non-emergency maintenance at times to make sure the power remains on for all.

DTE found that the pole in the Stonebridge Subdivision was an extra pole, that should have been picked up. A crew was sent to pick it up.

DTE apologized for any inconvenience and said it would work to find out how improvements can be made to prevent any such inconveniences in the future.

“We’re happy about it,” Begum said.

“Channel 7 did good. Hats off to you guys," Katrajadda said.