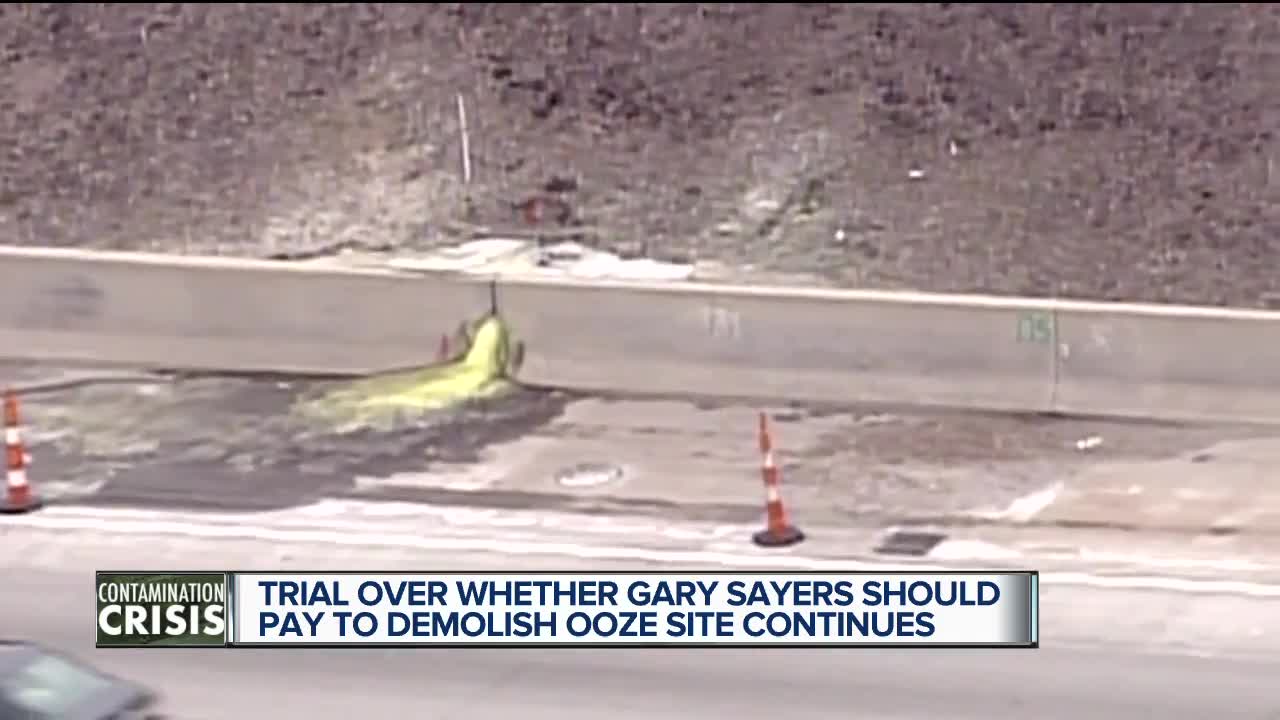 The trial over whether Gary Sayers will have to pay to demolish the site that is the source of the green ooze on I-696 is continuning.

MADISON HEIGHTS, Mich. (WXYZ) — Should the owner of the building that is the source of the green ooze seen flowing onto I-696 last year be forced to pay to tear his building down?

That is the decision a judge at Oakland County Circuit Court will make. The trial continued Wednesday with detailed testimony about how the fire department discovered the dangers in the building.

The Madison Heights Fire Chief took the witness stand. He testified he was driving down the road and saw a mess that concerned him back in 2016, leading to the discovery of thousands of barrels of hazardous waste.

Lelito testified that when he and the fire marshal went into the business owned by Gary Sayers, they saw problem after problem. There were holes in the floor and the roof. There were 5,000 containers of suspected hazardous waste, many unlabeled, corroded or leaking.

To prove it wasn’t hazardous Sayers put his arm in the chemicals and said they were safe, although he could not say what they all were. They also saw an earthen pit filled with green chemicals.

Sayers was cited for numerous violations and Lelito contacted the state, leading to the environmental investigation.

The EPA eventually responded and cleaned up those thousands of containers of hazardous waste and the green liquid. However the EPA did not decontaminate the soil at the bottom of that earthen pit.

The city says in order to do that and prevent the flow of poisonous hexavalent chromium, the building needs to go. Madison Heights has sued to make that happen.

The attorney for Sayers has tried to make the case that if the situation is so urgent that the building needs to be torn down, the government should have moved more quickly.

“We were giving Mr. Sayers a chance to fix the problems we discovered,” answered Lelito.

Lelito was the last witness that the City of Madison Heights is expected to call. Witnesses for Sayers are expected to testify Thursday.

The EPA has been back at the scene since drivers saw the “green ooze” and is working to contain and clean up the toxic chemicals.