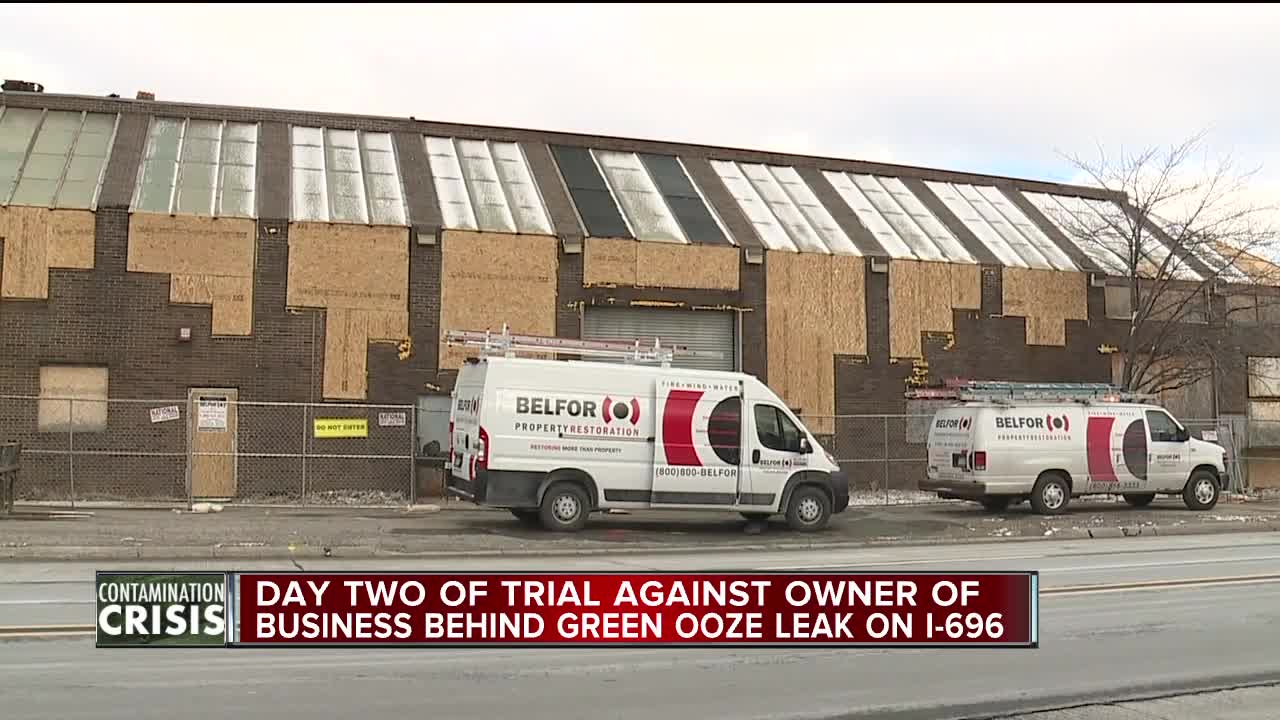 The City of Madison Heights is building a case against the imprisoned owner of Electro-Plating Services.

MADISON HEIGHTS, Mich. (WXYZ) — The City of Madison Heights is building a case against the imprisoned owner of Electro-Plating Services.

The city wants Gary Sayers, 70, to pay for the rest of the cleanup and demolition of buildings at the site where green ooze flowed out onto I-696 last month. Sayers is serving 11 months in federal prison after pleading guilty to illegal storage of hazardous materials. The civil trial is continuing in Oakland County Circuit Court.

The state shut down the business in 2016 and the EPA removed 5,000 containers of hazardous chemicals to eliminate the imminent threat. But enough residue was left behind in two pits in the basement that when groundwater and rainwater flowed into the building it caused the toxic ooze and caused other contamination around the site.

The old building had gaping holes in the roof.

Korey Groetsch Director of Environmental Health with the Michigan Department of Health and Human Services testified the imminent threat in 2016 included how people near the site would be exposed to airborne toxins if a fire broke out and chemicals interacted that could be “up to and including death.”

The area is densely populated and has day care centers nearby. Groetsch said fire officials would have to evacuate an area up to 2 1/2 miles to keep people safe.

The chemicals identified inside include Hydrogen Cyanide, Hydrochloric Acid, Trichloroethylene and Hexavalent Chromium - all used in the metal plating business. PFAS was also discovered at the site last week.

The business first started operating at this site in the 1950s and included land that is now part of I-696.

Under cross examination by the attorney for Sayers, Joseph Sullivan, Groetsch also testified there is no imminent threat now.

Alexandra Clark also took the stand for the city. She’s with EGLE, the Michigan Department of Environment, Great Lakes and Energy. She was involved in the 2016 cease and desist order that shut down the business.

She testified the source of the current contamination is coming from the lower level of the building, all around the building and north toward I-696. She says further testing is underway to establish how far contamination has moved and how much needs to be removed.

State and federal officials say there is no threat to the municipal water systems in the area. A trench will be dug between the business and I-696 to catch more of the contamination.

Daljit Benipal is a structural engineer who has worked in Metro Detroit for years. He gave expert testimony that the buildings are not safe and could collapse. Pictures shown to the judge show rusty steel beams that are the framework support the structure. Some have also been cut.

Benipal also testified the building is leaning to the west.

The city says the cost could be $500,000. It will be up to Oakland County Circuit Judge Hala Jarbou to determine if Sayers pays.

The feds also charged Sayers for the EPA cleanup which cost $1.4 million dollars as part of his criminal plea deal.