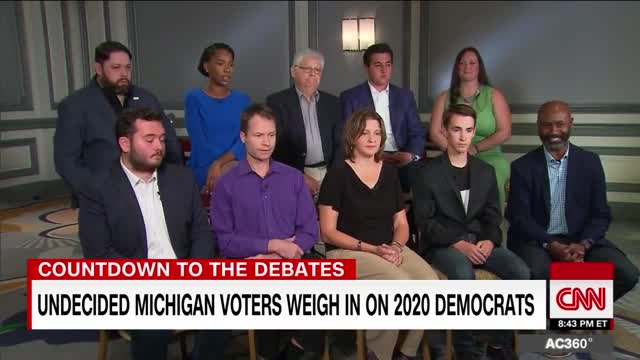 When Donald Trump won the White House, Grant Gaither counted himself among the skeptics. He didn't like the guy or his rhetoric. Then he watched the economy come roaring back in his part of Michigan.

MACOMB COUNTY, Mich. (CNN) — When Donald Trump won the White House, Grant Gaither counted himself among the skeptics. He didn't like the guy or his rhetoric.

Then he watched the economy come roaring back in his part of Michigan.

Gaither just bought a new car and, for the first time, he is saving up to buy a house. His mom, a postal worker, recently got a long-deserved raise. His high school classmates from Macomb County, some of whom were swept up in the opioid epidemic, are doing better and getting work, which Gaither attributes to the combination of a crackdown by local officials on "pills" and the uptick under the Trump economy.

At a time when unemployment is near historic lows and the economy is flourishing, the 2020 election could turn on the question of whether Americans turned off by Trump's racist and xenophobic rhetoric will give him a pass because they and their loved ones are doing better financially. Places like Macomb County outside Detroit, where CNN will host the second Democratic presidential debates on Tuesday and Wednesday, could serve as a useful barometer for whether Trump can once again sweep Midwestern states like Michigan and Wisconsin, which delivered him a victory in 2016.

Macomb County is ground zero for that test -- the spiritual home of the mercurial "Reagan Democrats" and a place where dozens of blue precincts flipped to red in 2016. Despite the mixed economic picture here and across the state, in more than two-dozen interviews with Democrats, Republicans and independents, most expressed optimism about the economy and there was little indication that average people are feeling a slowdown. Some Democrats had concerns about what they view as the far-left agenda of many of the Democratic presidential candidates, compared with the President's focus on economic policies that he believes will boost growth.

Gaither, who inspects goods like steel and aluminum before they are shipped overseas, is working seven days a week and can barely keep up with the demand for his services. That economic confidence has altered his opinion of Trump, leading him to brush off some of the controversies over Trump's race-baiting and anti-immigrant statements.

"These companies are willing to pay double, triple," the 30-year-old said during a recent interview outside a Home Depot in his hometown of Warren. "We can't hire enough people ... (Trump) just cut the red tape. It doesn't exist anymore."

Like many other voters here in Macomb County, which is 81% white -- Gaither, an independent, shrugged off the recent controversy over Trump's suggestion that four minority congresswomen should "go back and help fix the totally broken and crime infested places from which they came."

Gaither underscored that he doesn't agree with everything Trump says. But "I'll take progress over a few shitty words that are said here and there," Gaither said. "The guy says stupid things, but as long as things are going good, I could give two shits."

"Until he says a literal N-word or something like that. Then yeah, I might be pissed, but that is beyond irrelevant to me," said Gaither, who is white, referring to the uproar over the President's comments about the congresswomen.

A mixed picture in Macomb

This is the economic picture that is fueling voters' semi-positive feelings about Trump, or at least their current willingness to overlook the aspects of his behavior that bother them.

An analysis of employment data by the Brooking Institution's Mark Muro showed that while overall employment is growing slower in Michigan than the nation -- 1% versus 1.5% across America -- it ticked up by a tenth of a percent last year.

Manufacturing is a key industry here but not the only one. In a year when manufacturing grew by 2.1% nationwide, that sector actually lost ground in Michigan year over year after Trump was elected (a contrast with Pennsylvania and Wisconsin, where Muro's analysis found that it grew).

The current economic picture in Macomb County is mixed. Muro notes that as auto growth slows in Michigan, employment growth could once again turn negative. A decades-old General Motors transmission plant in Warren will close this year, even as the company keeps its transmission factory in Mexico open. (GM also said it would close the nearby Detroit-Hamtramck plant in Wayne County).

Trump's approval rating nationwide has been steady over the past two years -- but it is clearly bolstered by the perception that the economy is good. That could change if economic growth slows over the next 15 months, before the election.

Wary of Democrats going too far to the left

Some voters here think the Democratic presidential candidates are focusing on the wrong ideas.

In interviews with CNN, Democratic voters expressed dismay that the field of candidates showed near universal agreement on giving health care to undocumented immigrants at a time when the country has so many unmet infrastructure needs.

In this labor stronghold, a number of Democrats also said in interviews that they don't like the push by 2020 candidates for the single-payer "Medicare for-All" proposal, because they worry that moving all Americans into one system would deplete the quality of Medicare. As 73-year-old Macomb County independent Ray Shields put it: He doesn't want politicians "fooling with Medicare and all that good stuff."

"I don't think they could do it [Medicare for All] without causing a lot of disruption. Everybody has so many differences in their medical wants and needs," said Shields, who retired after a career as a machinist making injection molds for automakers. If Democrats added all Americans into the Medicare system, Shields said: "It's going to start draining it. Where are they going to find all the money to keep it up?"

Shields, who says he faced "not good choices" in 2016 between Trump and Hillary Clinton, said he believes Trump has acted like "a clown" in office. He said he would lean toward a more moderate Democrat like Biden, but he questioned whether Biden would get tripped up in a contest against Trump. The former vice president seems "kind of wishy-washy right now"—too "soft-spoken" and "not a direct talker."

"I don't know what his problem is," Shields said. "I think he's trying not to offend anybody, because he's a real good guy, as far as a person, but you've got to be kind of hard-nosed."

Shields mentioned Julián Castro as an example of a candidate who seemed tougher than Biden in the first set of debates.

Though Biden was the most often-mentioned Democratic 2020 candidate, along with Vermont Sen. Bernie Sanders, hesitation about the former vice president is a consistent theme here in a part of the country dominated by the sort of blue-collar workers that Biden was supposed to appeal to.

At the same time, many voters here are clearly experiencing Trump fatigue. The President's taunts, his combative nature and his history of profane boasts like those in the Access Hollywood tape have clearly grated on voters.

Both Shields and Mark Kimbel, a former forklift driver from Warren who worked for a supplier to the big three auto companies, said they were particularly turned off by Trump's tirades against immigrants.

"I'm 65 years old, I've been voting since I was 18 years old and I've never heard a president ever say anything like that to the Congress people," said Kimbel, referring to Trump's comments about the four minority congresswomen. "I don't know if this country can go another four years with Trump in there."

Kimbel noted the contrast between Trump and Ronald Reagan, who he voted for.

"Reagan," he said, "would never say anything like that."

"I hate to talk about the President like that, but the guy is a liar. Have you ever seen any President in [the White House] where that many people resigned?" Kimbel said. "It just tells you that he's not doing something right ... The only thing I like about him is that the economy is doing good, you know?"

Still, there is no sense at this juncture that any one Democratic candidate would serve as a consensus alternative in this more moderate part of the country. Democratic candidates are often described here as a kind of jumbled mass -- "there are too many of them" is a common refrain. Voters strain to recall their names, using descriptors like "that young fellow" about South Bend, Indiana, Mayor Pete Buttigieg, or "the lady from Massachusetts" when recalling Sen. Elizabeth Warren.

Julie Cetrone, a 40-year-old independent who recently got a new job at a grocery store in St. Clair Shores, is among those waiting to be impressed by one of the Democrats, because she says Trump "scares me sometimes." Cetrone sat out the 2016 election after supporting Sanders in the Democratic primary, because she says she didn't want to "get the blame for what happened" under Trump or Clinton.

"Some of the stuff he says, when he's saying it, and I'm watching on TV, I spit my water out," Cetrone said. "I can't help but laugh. It's humorous. Some of the things -- not a lot -- but some of the things he's said, I've thought of saying, but I never would do it. I guess I give him credit for sticking with whatever he believes in. But he needs to use a filter way more."

At the same time, Cetrone continues to be bothered by Trump's attitude toward women, particularly those who have accused him of wrongdoing. The President recently denied an allegation that he sexually assaulted magazine columnist E. Jean Carroll more than two decades ago by saying she wasn't his type. More than a dozen women have accused Trump of misconduct, including sexual harassment, assault and lewd behavior from before he took office; he has denied all of the allegations.

"I really don't like the way he talks about women at all. It's like you have to be a supermodel or attractive" to win his approval, Cetrone said. "I think that's absolutely wrong."

But she isn't excited about any of the Democratic candidates yet. She might support Sanders again. Biden's name elicits a shrug.

"A little bit boring," she said with a laugh.

She continued: "I wish he'd fire back a little harder. You don't have to stoop to Trump's level, but he could use a little more backbone. Show people you're not going to back down either."

While many Republicans in Macomb County fiercely defend Trump, there is clearly a desire among some of them for less polarizing leadership -- and for a time when they won't be forced to defend Trump's inflammatory comments or support a party they believe has drifted toward socialism.

Barry Brinkley, 75, and his wife Susan, 70, of St. Clair Shores, who described their politics as "as far right as you can get," said they hope Vice President Mike Pence will challenge Trump in 2020, because they believe Trump's "mouth is bigger than his brain."

But the Democrats aren't an option, Barry Brinkley said, "because of the giveaways and the socialism."

Asked whether that meant he would vote for Trump again, Brinkley replied: "Grudgingly."