'It was terrifying.' Students recall Hartland Middle School bus crash as some recover from serious injuries 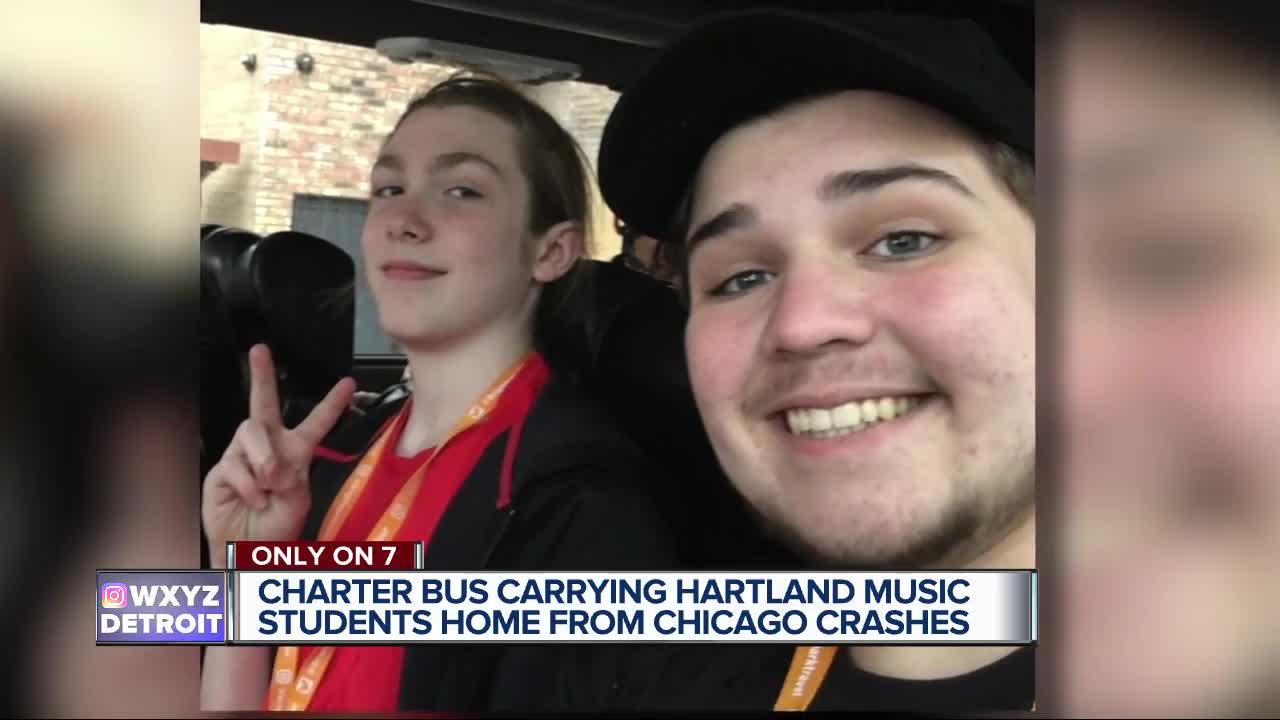 Hartland Consolidated Schools says injuries sustained by middle school students in a bus crash over the weekend are worse than they originally thought.

HARTLAND, Mich. (WXYZ) — Hartland Consolidated Schools says injuries sustained by middle school students in a bus crash over the weekend are worse than they originally thought.

“The bus tips and everybody hits the back of their seats and falls on their side and everyone’s just shocked,” said Aiden Tanner, a Hartland band member who was on board the bus.

There’s a sharp turn where the bus wrecked which may have contributed to the accident. Local authorities are investigating....we’d like know how many accidents have occured here in the last 6 mos. - year. We will ask too. @wxyzdetroit pic.twitter.com/0OYPePnX32

According to the district, students and chaperones were returning from a Hartland Middle School Band and Choir field trip to Chicago on Saturday when the charter bus they were riding in crashed. We're told the charter bus ran off the road while exiting I-96 at Burkhart and tipped over on its side.

"'I'm laying against the glass and then I fell the dirt coming up," said Thomas Persons, who was sitting next to Tanner. "Then it hits you."

Originally, it was reported by the school district that most students were unharmed and no one was seriously injured.

On Monday, the Livingston County Sheriff's Office said that once the injured people were able to be fully evaluated, some injuries were worse. Those injuries include a broken neck, broken ribs, collapsed lung and broken hand. The list doesn't include all injuries and isn't specific to one person.

"I helped this one woman who had a bloody face out of the bus," Persons said.

Student: “It was terrifying.” 8th graders from @hartlandschools speak out after their charter bus tipped over on its side. Some riders suffered broken bones. Photos are of two students who had minor bumps and bruises. @wxyzdetroit pic.twitter.com/DKHhtPUP20

According to the sheriff's office, the on-scene injuries were assessed through triage and were preliminary.

The Sheriff's Office continues to investigate the crash and once it is finished, they will send their investigation to the Livingston County Prosecutor's Office. Concerned parents have shared their thoughts on social media and with 7 Action News Reporter Rudy Harper.

"I'd like to know what happened or if there was any other issue," said Sabina Persons, mother of Thomas. "But, I'm just going to go on the assumption that she [bus driver] just made a mistake."

7 Action News reached out to the bus company, Ground Travel Specialist, based in Brownstown Township for comment. The owner Dave Horvath decline to elaborate about the investigation or the driver's record with the company. However, Horvath said in statement: "We are very thankful that everyone appears to be ok, we have only heard what has been reported and we wish those that have been injured a speedy recovery. Ground Travel Specialist has reported the incident to the proper authorities and await the results of those investigations. And again we wish all those involved and or inconvenienced a speedy recovery."