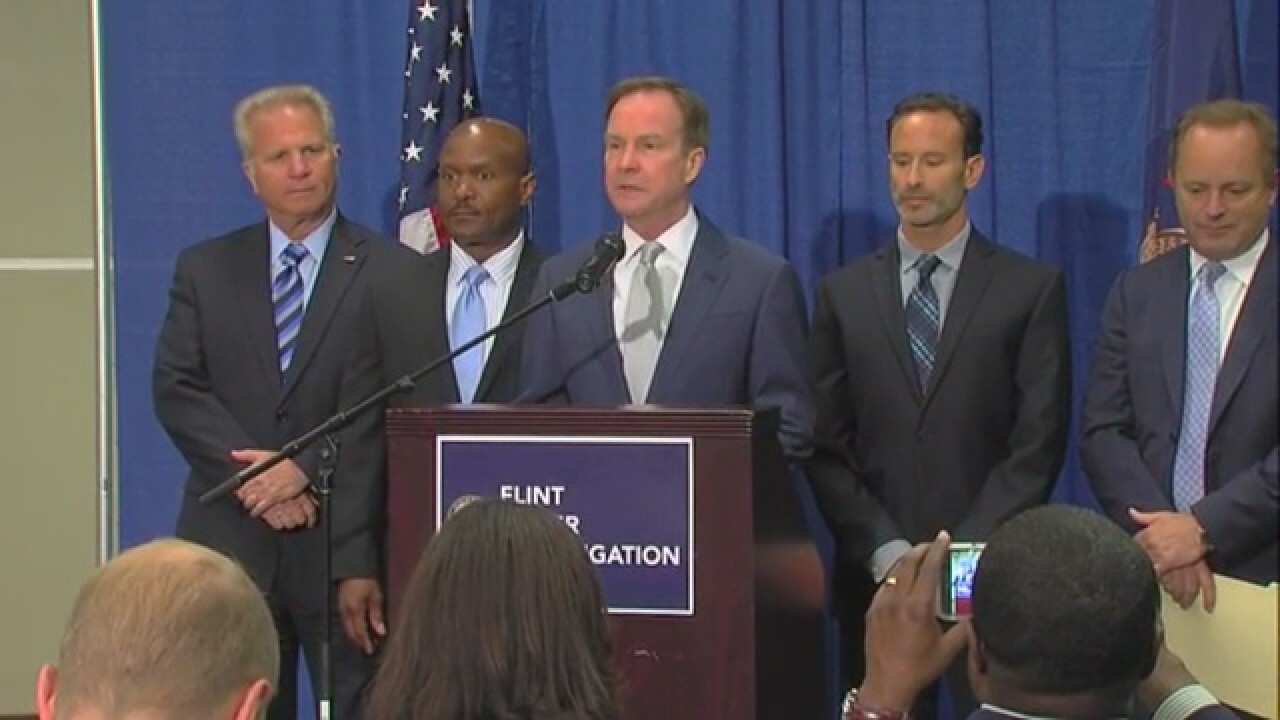 Lawsuits have been filed against Veolia and Lockwood, Andrews & Newman (LAN) for negligence and fraud.

Sources say the consultants were in a position to know and should have sounded warnings about the dangers of Flint water.

"Many things went tragically wrong in Flint, and both criminal conduct and civil conduct caused harm to the families of Flint and to the taxpayers of Michigan," said Schuette. "In Flint, Veolia and LAN were hired to do a job and failed miserably. Their fraudulent and dangerous recommendations made a bad situation worse.

The City of Flint switched to using the Flint River for water in April of 2014 to save money. That water was more corrosive and caused lead to leach from pipes into drinking water in the city of 100,000 people. The switch was authorized by the Emergency Manager appointed by Governor Rick Snyder.

The water was switched back to the Detroit water system in October of 2015, but the water is still not safe to drink and it is not known when it will be.

The company is disappointed that the Attorney General has taken this action and will vigorously defend itself against these unwarranted allegations of wrongdoing. The official report from the Flint Water Advisory Task Force, commissioned by the Governor’s office and completed after dozens of interviews, contained no reference to Veolia and assigned the company no blame or responsibility for the current crisis.

The Attorney General has not talked to Veolia about its involvement in Flint, interviewed the company’s technical experts or asked any questions about our one-time, one-month contract with Flint. Veolia’s engagement with the city was wholly unrelated to the current lead issues. In fact, lead and copper testing were specifically not included in the company’s scope of work because the city represented that it was itself conducting required testing at the time of our analysis.

Flint hired Veolia nearly one full year after the change in water source, and the focus of Veolia’s analysis, at Flint’s direction, was only to help the city address concerns about the levels of disinfection byproducts (TTHM), discoloration, and taste-and-odor issues related to the drinking water treatment process. During our one-month consultation, the water produced and provided by Flint met the treatment standards for levels of disinfection byproducts. Veolia’s technical experts noted this in the company’s final report to Flint in March 2015 and also identified potential water quality issues. The company recommended changes in the chemicals and dosing used in the treatment process to minimize TTHM formation along with risks associated with corrosion.

The company stands by the analysis provided to Flint under a limited scope in February 2015 and will defend itself against unwarranted allegations of wrongdoing levied while the Governor’s own task force largely assigned the blame on the state of Michigan itself.

The Attorney General has blatantly mischaracterized the role of LAN’s service to Flint and ignores the findings of every public investigation into this tragedy that the key decisions concerning the treatment of the water from the Flint River were made by the City of Flint and the Michigan Department of Environmental Quality (MDEQ). The Attorney General specifically referred to a decision not to provide appropriate corrosion control, which resulted in a significant decline in water quality, a decision that was made by the City and the MDEQ, not by LAN. Contrary to statements by the Attorney General, LAN was not hired to operate the plant and had no responsibility for water quality, but, and although LAN was not asked, LAN had regularly advised that corrosion control should be added and that the system needed to be fully tested before going online.  The Flint Water Advisory Task Force found that this tragedy was "a story of government failure" at all levels. We are surprised and disappointed that the State would change direction and wrongfully accuse LAN of acting improperly. LAN will vigorously defend itself against these unfounded claims.