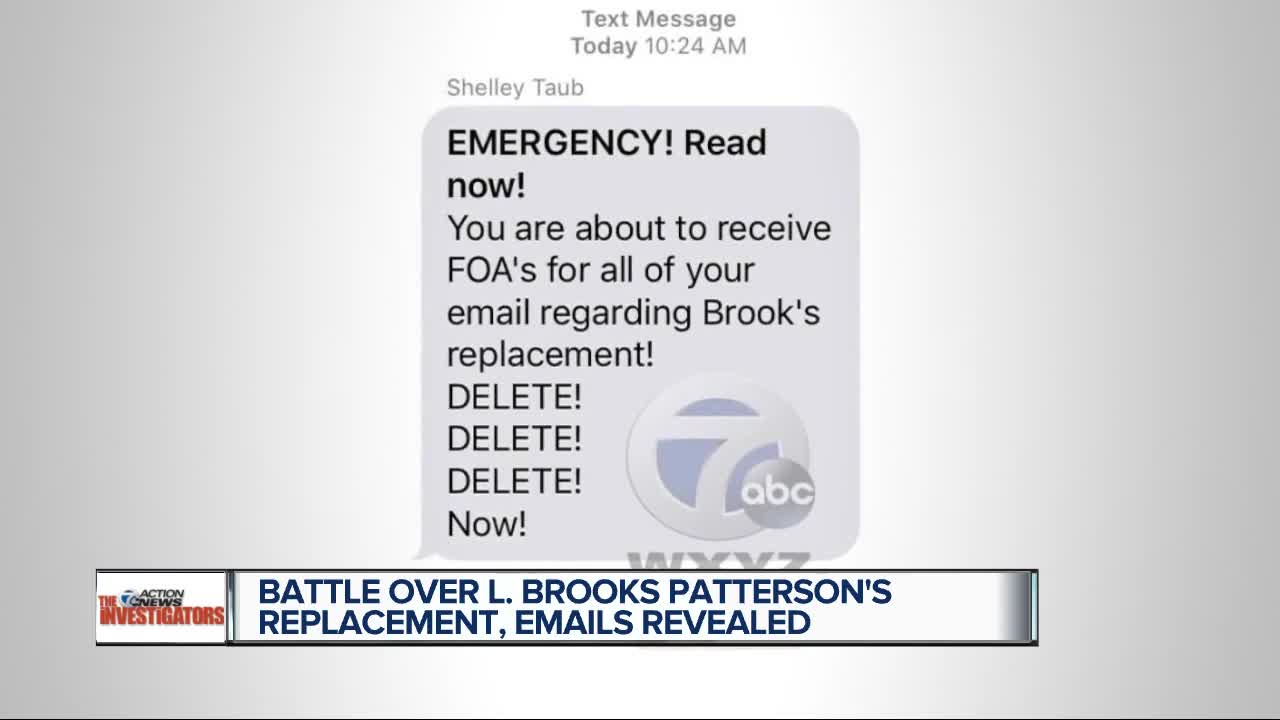 It was the text message that sparked a firestorm in Oakland County: a commissioner telling her fellow elected officials to delete their emails after the 7 Investigators asked for public records.

We have now received the results of that public records request (also known as a FOIA) that prompted that controversial text message. Oakland County provided us with 876 pages of records.

So far, we’ve seen a lot of emails from upset voters and some emails that may seem insensitive from commissioners.

After legendary Oakland County Executive L. Brooks Patterson passed away on August 3, many people were shocked at the political maneuvering that started almost immediately after his death.

At the time, the 7 Investigators received tips about allegations that Oakland County Commissioners may be violating the Open Meetings Act, so 7 Investigator Heather Catallo and 7 Action News Reporter Simon Shaykhet both sent public records requests for different items, including all of the commissioners emails and texts about the appointment of the next county executive.

And that’s when things got weird.

The next day, the 7 Investigators obtained a text message from confidential sources that was written by Republican Caucus Vice Chairwoman Shelley Goodman Taub (R- Bloomfield Hills). It reads EMERGENCY! Read now! You are about to receive FOI for all of your email regarding Brook’s replacement! DELETE! DELETE! DELETE! Now!”

“Does that look like something that you sent,” Shaykhet asked Taub on August 9.

“Yes I did. I did,” said Taub. “I was concerned that they might see some nastiness. That was it, something that wasn’t proper. And I did not know what the FOIA said, quite frankly.”

Now the 7 Investigators have those emails.

There are several email messages from voters upset with Taub for that lack of transparency.

There are others that address the public outcry that grew about the rush to appoint someone before Patterson was even buried.

Commissioner Gwen Markham (D-Novi) emailed her fellow democrats on the board saying, “They scheduled the funeral the day of our regularly scheduled board meeting. It’s unfortunate, but we can put someone in the office, and still make it to the funeral.”

That board meeting was ultimately postponed.

Markham says no one was trying to insult the family, they just had to get someone appointed within 30 days, or they would have to hold a special election.

But Markham’s talking points also included in those emails make it clear, the Democrats on the board did not want a special election. She writes, “We would have squandered 17 months of potential Democratic control of both the Executive office and the Board of Commissioners.”

Our requests for public records exposed the fact that many of the commissioners used their personal email accounts to conduct county business.

Oakland County Board of Commission officials say this FOIA response was done in part on the honor system, meaning commissioners were not required to turn over the records. All of them released emails, but we won’t know for sure if everything was released or if things were deleted unless the Michigan State Police pursue search warrants as part of their investigation. That investigation is ongoing.

Oakland County Board of Commissioners Chief of Staff Chris Ward released a written statement to the 7 Investigators:

The appointment process for the office of county executive demonstrated that the Board of Commissioners must improve procedures and invest in technology to ensure transparency. In the past, our members have been overly reliant on personal devices and emails due to problems maintaining access to our county system. We are implementing solutions to ensure these problems do not reoccur.