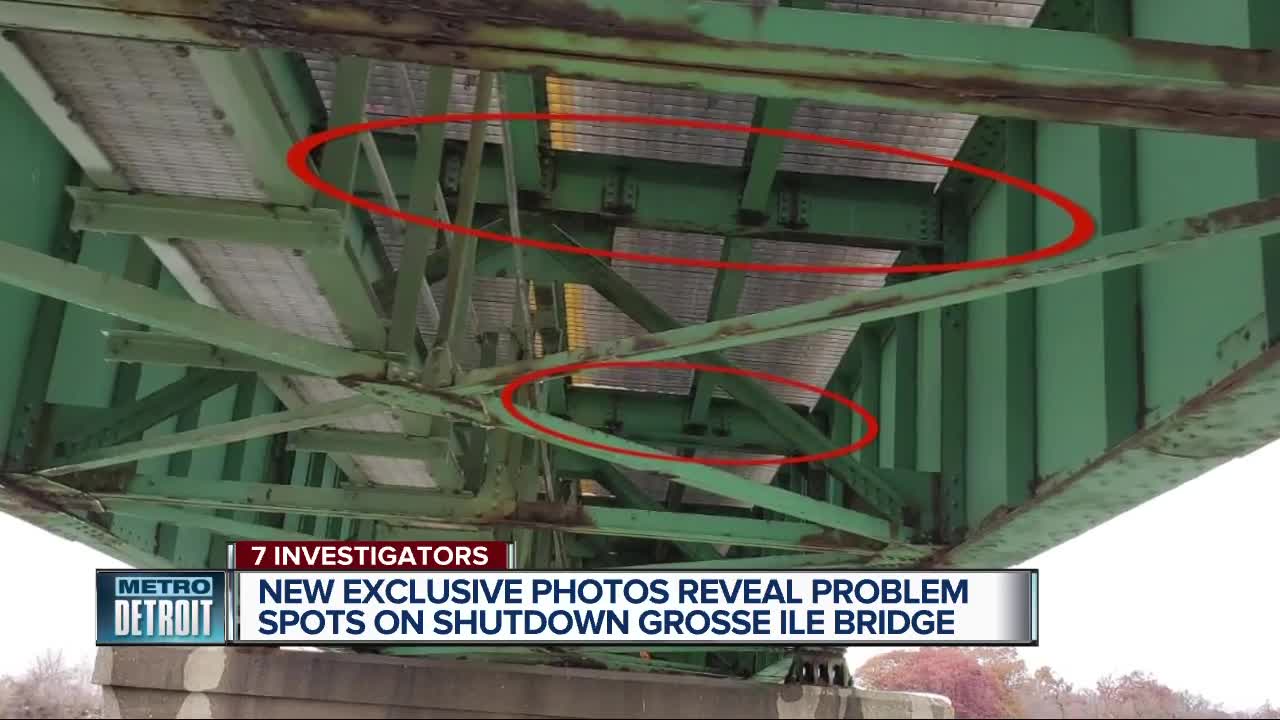 New pictures obtained by the 7 Investigators show the deterioration underneath the Wayne County bridge in Grosse Ile.

GROSSE ILE, Mich. (WXYZ) — New pictures obtained by the 7 Investigators show the deterioration underneath the Wayne County bridge in Grosse Ile. 7 Action News has been digging for more answers about the sudden closure of the county bridge that’s left hundreds of drivers stuck in long lines after being forced to take the toll bridge onto the island during the county bridge shutdown.

A county spokeswoman said ten steel plates need to be installed to support four floor beams that must be repaired. Four of those were replaced Monday. The rest will be worked on Tuesday.

But Grosse Ile residents are demanding answers from Wayne County about why this work wasn’t done years ago.

The new photographs taken this weekend show the condition of the floor beams under the deck of the Wayne County bridge connecting Grosse Ile and Trenton.

County officials tell us the deterioration of the bridge’s floor beams prompted the emergency closure of the Parkway bridge that more than 16,000 drivers use each day.

“What did Wayne County know, when did they know it, and what are they going to do to fix it?” asked Grosse Ile Civic Association Board Member Greg Karmazin. Karmazin says taxpayers want answers about why there was a delay between the inspection of county bridge and the sudden closure Nov. 13.

Here’s what the 7 Investigators have learned about what led to the closure:

On Aug. 30, a consultant finished a five-day structural, mechanical, and electrical inspection of the bridge.

A county spokesman says, then the consultant conducted a detailed analysis and did calculations to determine the condition of the bridge.

On Oct. 1, that consultant identified some deficiencies that would require the load rating of the bridge to be recalculated within 90 days. The spokesman said, “no immediate action was required at that time.” The bridge consultant called it a “request for intermediate action.”

Late in the afternoon on Nov. 12, Wayne County received notice that the bridge’s load rating was being dropped from 26 tons to zero.

The county closed the bridge the next day.

When 7 Action News asked why there was a six-week delay between the intermediate notice that they would need to recalculate the 26-ton load rating, the engineering team that inspected the bridge said they had to analyze 1500 photographs and notes, in addition to reports from a subcontractor.

Once all of that was done, they realized they needed to make immediate repairs; that’s what happened last week so the bridge was closed to traffic.

The county hopes to have a tentative timeline for completion of all repairs by close of business on Tuesday.

As the 7 Investigators first exposed last spring that critical underwater inspections on this bridge in the past were missed. The bridge was also supposed to have been inspected in the past by a county inspector who admitted that he “copied and pasted” bridge inspection reports from year to year. That contractor was later terminated from the county.

All of that reporting, along with questions about delays in construction that was slated to start this fall, have residents wanting more information from the county.

“It’s upsetting, we pay taxes like everyone else, and we expect this bridge is repaired in a timely fashion,” said Karmazin.