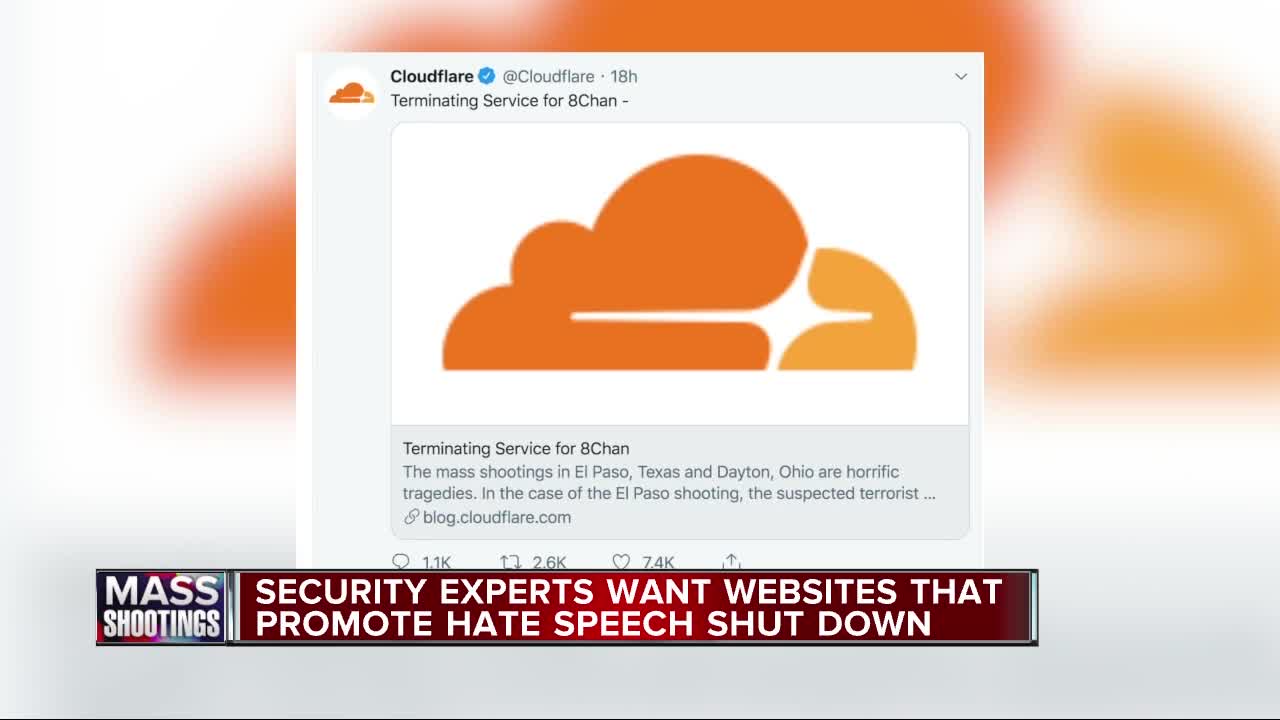 The man police say is responsible for the mass shooting in El Paso posted a manifesto on the website 8chan shortly before Saturday’s shooting.

DETROIT (WXYZ) — The man police say is responsible for the mass shooting in El Paso posted a manifesto on the website 8chan shortly before Saturday’s shooting.

Early this morning, 8chan was shut down, at least temporarily. The shooters in 3 recent mass killings have used the site to post racist rhetoric, and now homeland security experts are saying enough is enough.

For the mass killings in El Paso, Christchurch, New Zealand, and Poway, California, the shooters posted extremist messages to the controversial online forum.

8chan was created in 2013 as a free speech zone. But its developer has since denounced the message board, calling for it to be shut down because it has turned into a megaphone for mass shooters.

Early this morning, 8chan’s internet provider, CloudFlare, announced they will no longer work with the site because of “lawlessness” that “has contributed to multiple horrific tragedies.” That means 8chan was at least temporarily shut down.

People are doing these things and they’re doing them because they watch a chain of contagion,” said former Homeland Security Advisor to President Trump and ABC News Contributor Tom Bossert. Bossert told the 7 Investigators that he agrees with CloudFlare’s decision to terminate their relationship with 8chan.

“We’re at a new dark place today, and the negative attention on 8chan and other platforms that provide this type of hatred room to grow and oxygen are really terrible sites. And its really high time that we call them to task,” said Bossert.

Bossert says Americans can balance free speech and watch for warning signs online to prevent another tragedy like the one that unfolded El Paso.

“It’s about having the institutional fixes necessary to tie it together, the observation of mental illness with the ownership records of guns, with the hate speech we see online. And if all three of those aren’t addressed together simultaneously, we’re not going to get in front of this problem,” said Bossert.

There are reports that 8chan has been back up online at various points Monday. At some point, it will likely be available again.

Industry leaders say this is a problem for the whole internet, and it’s time for more vigilance to stop hate speech and violence.