How safe are malls?

Looking at the data after a number of recent shooting incidents 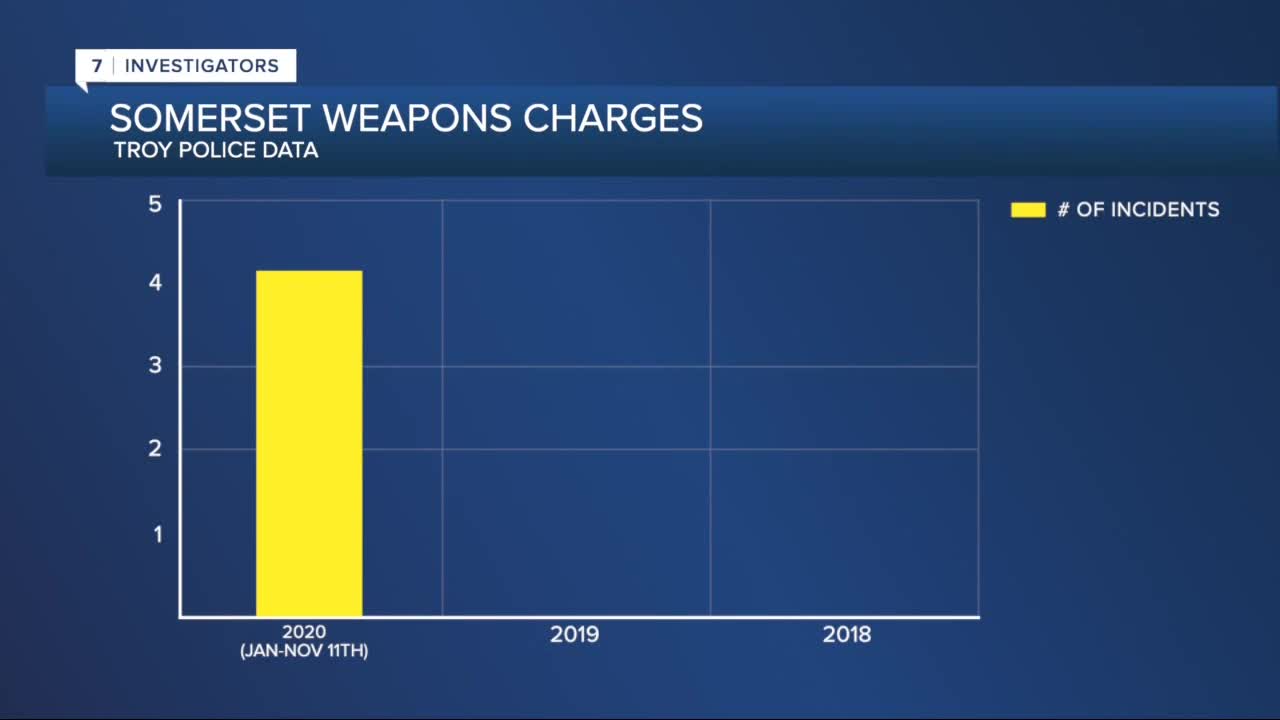 “We need somebody in Nordstrom immediately,” a caller at Somerset Collection pleaded with Troy Police in a 911 call Oct. 2. (WXYZ) — “We need somebody in Nordstrom immediately,” a caller at Somerset Collection pleaded with Troy Police in a 911 call Oct. 2.

“Everybody’s hiding, but there’s a gun — a customer has a gun and there’s a fight going on,” another caller stated.

Three weeks later on Oct. 25, Troy Police responded to another incident at the mall involving a gun outside of Neiman Marcus. A week after that, on Nov. 3, they were back again for another incident with a gun.

Troy Police have arrested suspects in all 3 incidents, and no one was hurt. The mall, however, is not alone. In July, police arrested a suspect after gunshots were fired at a perfume shop inside Westland Shopping Center. And last month Eastland Center had two separate gun incidents outside — three people were shot in total, one fatally.

The incidents raised questions for 7 Action News. We wanted to know if this was a bigger trend. We requested crime data from Troy Police for Somerset Collection, Westland Police for Westland Shopping Center, Harper Woods Police for Eastland Center, and Novi Police for Twelve Oaks Mall. Westland Police did not respond to our request.

The data — specifically around violence — is uneven.

At Eastland Center, for example, there were 681 incidents in 2019. Only one involved a firearm; it was a robbery where the suspect pulled the trigger, but the gun did not fire, according to Harper Woods Police, who note there were no injuries or arrests. In 2020 the only shooting incidents were the ones from October.

We asked Harper Woods Police, as well as Eastland Center Management for a comment on these incidents and any trends. We have not heard back.

Somerset Collection, which is one of the more upscale malls in the metro-Detroit region, does show an increase in charges involving guns.

Troy police records, for example, show that this year Somerset had four incidents between January and November 11 that resulted in concealed weapons charges. There were zero last year, and two in 2018.

Troy Police declined to comment for our story, saying they were “not in a position to make any conclusions about violence” at Somerset Collection right now.

Nathan Forbes, a managing partner at the Forbes Company, which manages the Somerset Collection and is a co-owner of the mall sent 7 Action News the following statement:

"Somerset Collection has a strong longstanding commitment to setting the standard for a healthy, safe and pleasant shopping environment, and this holiday we are doubling down on that effort. There have been isolated occurrences in and around the shopping center and across broader Southeast Michigan…occurrences that will not be tolerated," Forbes wrote explaining that the mall had introduced new and enhanced security protocols and amenities such as ambassadors at every entrance, security detail in all locations, and increased mobile police.

"We have also expanded our "Collection to Car" curbside pickup and are now offering home delivery, among other concierge services,” he continued. “It is important that our community is confident knowing that Somerset Collection is here to help, however, and whenever they shop this holiday season."

While the violence is difficult, at this point in time, to pull out and label a specific trend, one occurrence is far more cut-and-dry: a decline in theft, across the board at all the malls.

It’s a trend he — and others — largely attribute to malls being closed due to the pandemic for much of the spring.

And while Twelve Oaks has not seen the same spark of violence the past few months — they've only had one incident of armed robbery so far this year and one incident with a concealed weapon — Molloy said he and his team pay attention when other malls in the region see incidents. They are learning and working with each other, he said.

"I commend Troy, Eastland, Westland, any place that has a regional shopping center," Molloy said. "I can tell you as a Chief of Police there’s a few things that keep us up at night and any dangerous activity occurring at a shopping center is certainly something that keeps us from getting a good night’s rest from time to time."