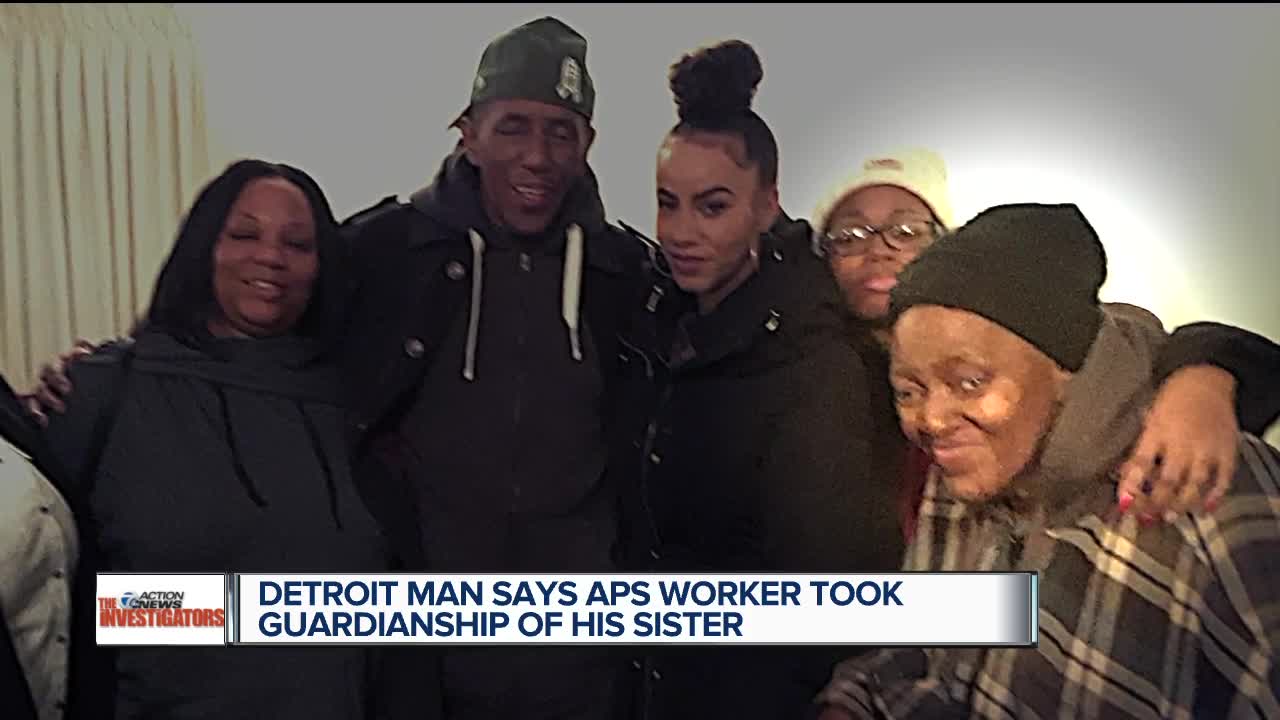 She’s supposed to protect vulnerable adults, but a local Adult Protective Services worker is accused of hiding a relative from her siblings.

(WXYZ) — She’s supposed to protect vulnerable adults, but a local Adult Protective Services worker is accused of hiding a relative from her siblings.

7 Investigator Heather Catallo first exposed this APS worker last year during a guardianship case that involved a Detroit grandmother. Now that worker is under fire again.

Family members are accusing Tresna Tupper of taking their loved one and hiding her away from them. They are also questioning whether Tupper should be in a position of power with vulnerable seniors in our community.

Clyde Edmonds has a message for his sister: “We miss you and we coming for you.

“I want my sister home,” Edmonds added. He says he hasn’t seen his sister, Paula Tupper, in months – not even for the holidays.

“It wasn’t right. We always get together during the holidays,” said Edmonds as he held back tears. “Thanksgiving and Christmas, we [were] together. We’re family, that’s how we were brought up.”

Clyde says after Paula had a stroke last summer, he tried to get guardianship of his 68-year-old sister to help her make medical decisions. But Clyde and Paula missed their hearing date in Wayne County Probate Court, so the case was dismissed.

Last fall, Paula was hospitalized again. But this time, Clyde says the sister of Paula’s late husband checked her out of the hospital and he hasn’t seen Paula since.

“I’ve been so stressed out trying to get help to locate my sister. I’ve been to the police station, I’m telling them that she’s been missing for months, and I haven’t been able to get no help from no one,” said Edmonds.

That sister-in-law is a woman named Tresna Tupper. Tresna is an investigator for Adult Protective Services, or APS, which is a division of the Michigan Department of Health and Human Services.

Bessie Owens told us that Tupper, in her role as an APS Investigator, came into her home uninvited last year and then filed a petition to place the 78-year-old Detroit grandmother under guardianship: a guardianship Owens did not want or need.

“Did you have any notice that a guardianship case had been opened about you?” Catallo asked Owens.

“Nothing in writing?” Catallo asked.

“Nothing in writing,” Owens added.

A judge later dismissed the guardianship and questioned why Tupper filed without notifying Owens children.

Clyde Edmonds also says he did not get any notice, as required by law, that Tresna was petitioning the court to become his sister’s guardian.

Tresna said in her petition that Clyde and Paula’s friends were financially exploiting her.

Clyde says that’s not true, and he alleges Tresna is the one doing the exploiting.

Edmonds says Tresna’s name is now on Paula’s bank account. He finally got to see his sister during a court hearing earlier this month. Her face lit up with a huge smile when she saw Edmonds in the courtroom.

At that hearing, he learned Tresna had placed Paula into a group home in Detroit, and that’s not all.

“Upon further inquiry, it does appear that the guardian has added her name to the title to the home owned by the ward. It appears there is an apparent conflict of interest,” said Renita Forrest, the court-appointed attorney (known as a Guardian ad Litem) assigned to advise the ward (Paula Tupper) of her rights.

About a month after Tresna was granted guardianship of Paula, she filed a deed with Wayne County, putting her name on Paula’s house.

So even though Tupper told the judge Paula wanted her to continue as her guardian, the deed transfer prompted Judge David Perkins to appoint an independent guardian.

“She asked me to stay,” said Tresna Tupper in court.

“I understand what she asked,” said Judge David Perkins. “I would like to see a third party appointed for now.”

After that hearing, while Paula’s friends and relatives enjoyed a reunion, we tried to talk to Tresna Tupper.

“Why haven’t you let Paula’s siblings talk to her?” Catallo asked Tupper.

“Why haven’t you let her siblings talk to her?" asked Catallo.

“No, I’m not being rude, you work for the state, and we have some questions for you about how you conduct your business. Why do you keep filing petitions for guardianship instead of contacting family members?” asked Catallo.

Tupper refused to answer and fled into an adjoining courtroom to further avoid our cameras.

She also refused to answer our questions about why she put her name on Paula Tupper’s home.

The 7 Investigators asked a spokesman of the Michigan Department of Health and Human Services, which oversees Adult Protective Services, whether they have done any additional training with their APS workers because of what we’ve uncovered.

They would not answer specific questions about employees, but did say that as a result of the questions raised by the 7 Investigators in our last story that involved Tresna Tupper, “Wayne County Adult Protective Services... reviewed the policies and procedures staff are required to follow prior to filing petitions.”

The independent guardian is in place until a court hearing next month.