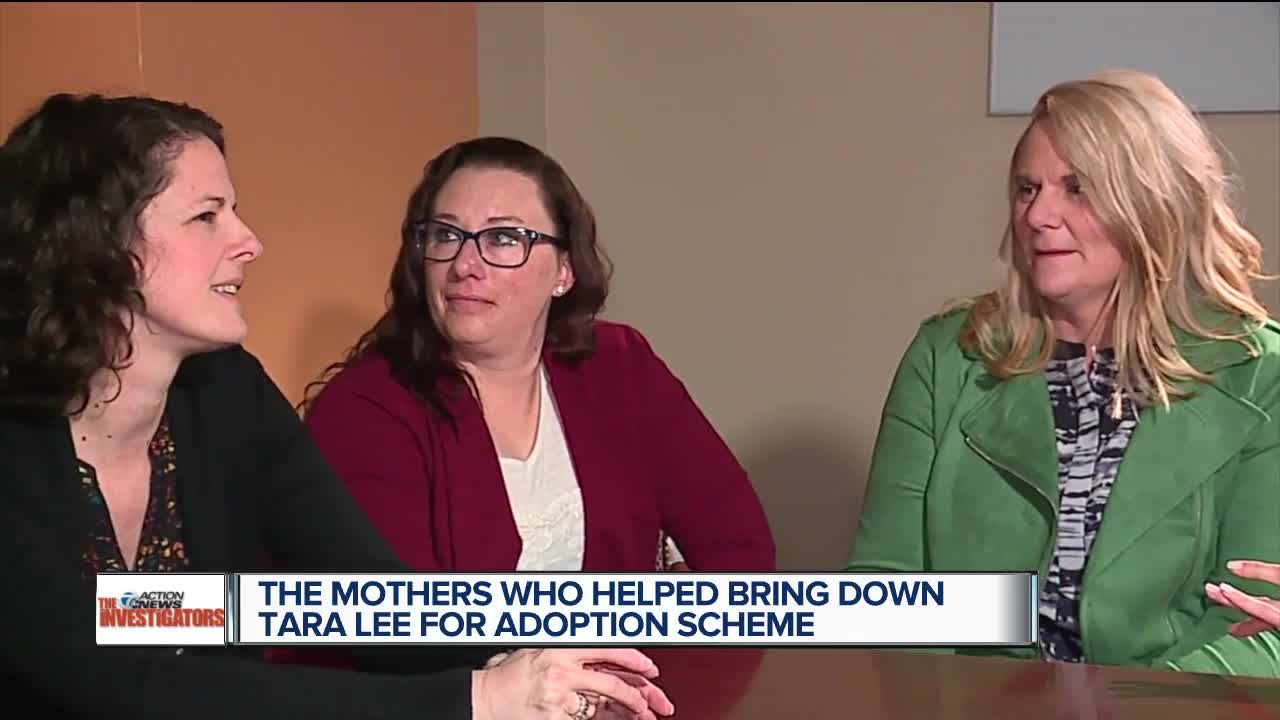 (WXYZ) — The 7 Investigators have told you about the double-matched babies and the birth moms who did not exist in a massive adoption fraud scheme.

Now for the first time, we’re hearing from the mothers who blew the whistle on Tara Lee, the Macomb County woman who was just sentenced to 10 years in prison for wire fraud.

The FBI and U.S. Attorney’s office in Detroit worked relentlessly on the Lee case, but they weren’t the only ones searching for answers. Three mothers who say their hearts were broken by Tara Lee’s adoption fraud scheme helped bring her down.

They came from across the country – to walk together into federal court in Detroit on Wednesday for the sentencing of Tara Lynn Lee.
After they told their stories of heartbreak, U. S District Court Judge Bernard Friedman sentenced the Macomb County mother to 10 years in prison, calling the adoption fraud scheme that Lee orchestrated the “worst case he’d ever seen.”

Federal prosecutors say Lee took in at least $2.1 million in adoption proceeds, even though she was never licensed to do that work. The feds say her nationwide adoption fraud scheme impacted 160 couples and 70 birth moms in 24 states.

Last summer, the 38-year-old mother from New Haven pleaded guilty to 2 of the 23 wire fraud charges she was facing. Lee acknowledged in her plea that she made up fake birth mothers, told adoptive couples that babies died when they never existed, and double matched couples with the same birth moms.

Now that Lee is sentenced, we can show you the three women who started piecing this case together about two years ago.

“I wanted her stopped because I didn’t want anyone to feel the pain that I felt,” said Cortney Edmond of Colorado.

“It’s shocking honestly to be sitting here, knowing where we started,” said Sarah Scott of Maryland.

“We had to figure this out. And as a mom, you want to protect and care for everything that you have,” said Julie Faulkenberry of South Carolina. “And I could not in good conscience let another family, another mom, another set of siblings go through what we went through, if we could stop it.”

After Julie’s daughter was stillborn back in 2016, Julie and her husband decided to add to their family in South Carolina with an adoption. Julie got connected with Tara Lee’s Always Hope Adoption in Michigan, and Lee matched Julie with a birth mom in Florida.
But Julie says Lee told them that the baby they had named Eli only lived for 45 minutes after birth.

“We were heartbroken, it brought back a lot of emotions for me because we had recently lost a child, so not only was I heartbroken because we weren’t going to have a baby-- I was heartbroken for that mom,” said Julie.

When Julie later asked Lee for the birth and death records, she says Lee refused.

“Do you think your baby ever existed,” asked Catallo.
“I don’t. And that’s kind of what took me on my next journey – I needed to find out, I needed to know if there was a baby,” said Julie.

Julie started contacting other moms trying to adopt, like Cortney and Sarah. They each paid Lee thousands of dollars, and they each had 2 failed adoptions that just didn’t add up.

So Julie called the FBI in South Carolina, and agents in Michigan later launched the investigation.
Sarah created a private Facebook group, and that’s when stories from adoptive couples across the country all started to sound the same.

“I also talked with birth moms. And what Tara did to the birth moms is just despicable,” said Julie.

“My own birth mom had to keep her food in the snow because the appliances that I paid for never got to her,” said Cortney.

While all three women are relieved Lee will spend the next 10 years behind bars, they say this isn’t over yet.

“We don’t want to stop here, we want to do big changes for the adoption laws,” said Julie.

Many times during the victim impact statements in court on Wednesday, families expressed the need for national adoption reform, which has been echoed by many of the birth mothers as well.

Even though Julie, Sarah, and Cortney lost thousands of dollars with Tara Lee, all three of these moms have all been able to add joy to their families with new babies.