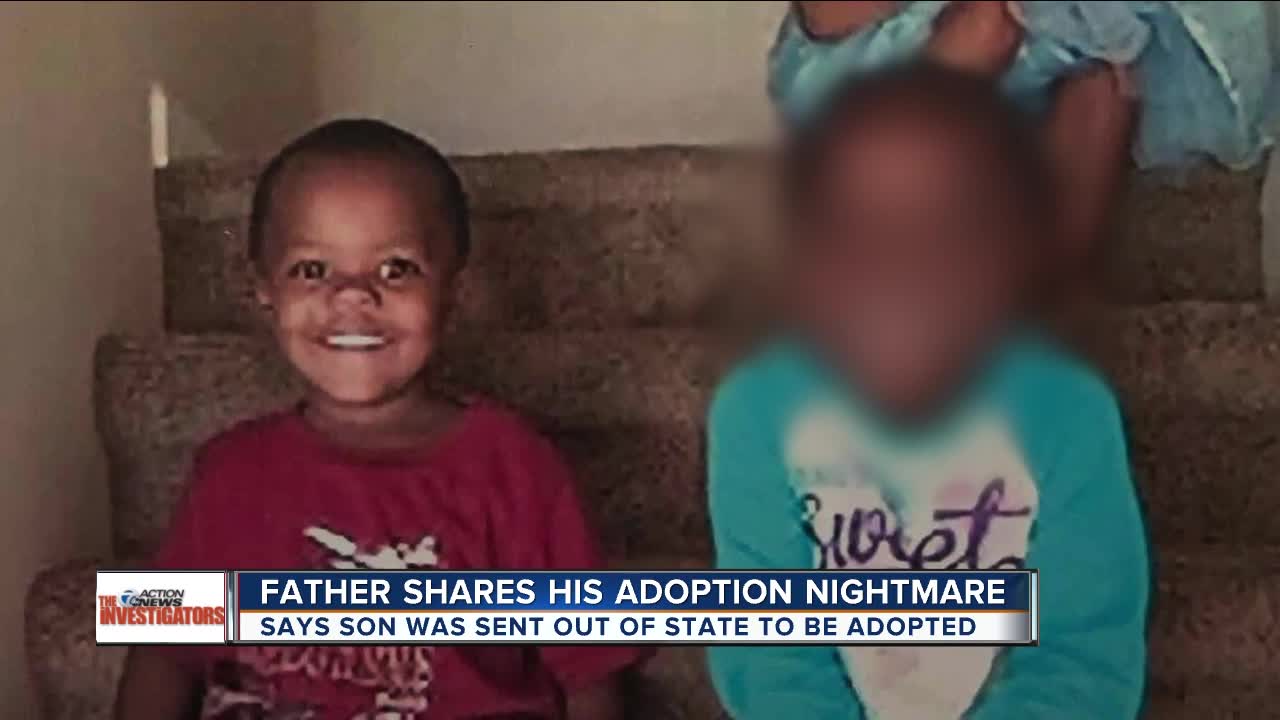 The 7 Investigators continue their investigation into an unlicensed adoption worker. After seeing our initial investigation, a local father says that the so-called adoption worker sent his son without his permission to a different state to be adopted. Patrick McGee Sr. says he would do anything for his son.

Patrick McGee Sr. says he would do anything for his son.

“Somebody sends somebody’s kid over state lines, and not knowing whatever the situation – what just gave you the power to just do it,” asked McGee when he spoke to 7 Investigator Heather Catallo.

McGee says he has Patrick Jr. back now, but in 2016 he spent months in agony because his son was sent out of state with his half-sister for adoption. McGee had joint legal custody of the boy with Patrick Jr.’s mother.

On Monday, the state is taking Lee to court to stop her from working on any adoptions because the 37-year-old from New Haven does not have a state license to do adoption work.

Multiple sources close to the FBI investigation have confirmed to the 7 Investigators that Lee is being investigated for promising the same baby to more than one potential adoptive family at a time. One mother in Ohio told the 7 Investigators she sent Lee $17,000 for a “match” with a Michigan-based birth mother, but she says Lee never provided proof of pregnancy and ultimately had to refund nearly $12,000.

“How can you just do this to people and kids,” McGee said.

In the summer of 2016, McGee says he was trying to meet up with his son’s mother, Darlisha Stewart, for his parenting time with Patrick Jr. McGee says he couldn’t get a straight answer about where the boy was, but he says he remembered that Tara Lee had helped Stewart stay in a house in Detroit.

“Typed her name on Facebook – boom – Always Hope Adoption! I see my kid on a picture. I see my kid. (Lee is) asking for clothes, shoes, he’s going to be here for a while… I instantly reached out to her," McGee said. "'Hold on, these are my kids right here! Here’s my number, you need to contact me.’ She blocked me on social media.”

So, McGee went to the police and eventually tracked down two Sterling Heights attorneys who worked with Lee for three years. Tonya Corrado and Talia Goetting say Lee and the child’s mother, Darlisha Stewart, had reached out to them to place Patrick Jr. and his half-sister with a family in Mississippi.

“They shipped him out already,” McGee said.

“Did you think you were ever going to see him again at that point,” asked Catallo.

The lawyers, who represented both the couple in Mississippi and Darlisha Stewart, say Tara Lee and the child’s mother led them to believe McGee was a violent person and a bad father. McGee denies that.

“When Mr. McGee reached out to us we suggested he file something in court," Goetting said. "We learned more facts and we withdrew from the case. What Ms. Stewart did to him, yes it’s awful – it is awful. But the court and the judicial system worked and he got his child back.”

McGee ultimately went to Wayne County court where he was awarded full physical custody of Patrick Jr., in addition to his legal custody. The mother’s rights to Patrick Jr. and his other half siblings were terminated.

While McGee is grateful to have his son back home, he says Patrick is still struggling from the separation.

“It messed him up completely," McGee said. "My son came back thinking his name is Theodore. You don’t know the pain you put people in.”

Stewart says she did not believe she was giving her children up permanently when she was working with Lee. She says she thought Lee was taking care of them for her temporarily so she could get a job.

As for Lee, her attorney denies that she did anything wrong and says that Lee’s name isn’t on any adoption forms, she was simply an advocate for the mothers.

Patrick McGee was the father of the child. The mother of the child sought to give up this child for adoption because of the abusive conduct of Mr. McGee. Mr. McGee never dealt with Ms. Lee. He has never had a contract with Ms. Lee and only spoke to her to get the attorneys names who were handling the adoption. Mrs. Lee did not send the child to Mississippi. It was at the request of the biological mother. Ms. Lee’s attorneys who handled the adoption advised that the decision to relocate the minor child is at the discretion of the mother. In fact there has never been any complaints regarding this situation until now. Mr. McGee has not filed any complaints in writing to her or Ms. Lee’s lawyers or any agency. In fact, Ms. Lee assisted Mr. McGee in getting the child back... there has never been any indication of any wrongdoing. The mother of the child initially stated that he may not be the father. They were never married and there was no presumption he is the father and no order of filiation ever entered. I also would like to mention that the minor child actually lived with Ms. Lee for approximately two weeks. See photo attached. Mr. McGee never once came to visit. The mother was homeless at that time and was receiving no financial assistance. Mr. McGee did message Ms. Lee on Facebook and threatened her but still refused to come and pick up his son. Goetting and Corrado are the attorneys who Ms. Lee used to handle all of the adoptions. They worked together for three years. I think it is important to note that Ms. Lee did not have access to pull a court document and she was never presented with a court order. If Mr. McGee presented a court order, or the attorneys checked the docket – we are not aware. In fact, Goetting and Corrado were well aware of Mr. McGee. Ms. Lee’s name is not on one single adoption form as Goetting and Corrado facilitated all of the adoptions. Tara was simply an advocate for the mothers.

McGee denies that he threatened Lee. He says Lee is the one who threatened him. He also says, if he had known where Lee lived he would have gone to the police in New Haven to get his son back.

“Our job is to advocate for our clients," said Goetting of McGee’s legal custody order in Wayne County. "We were told that there was no action filed. And temporarily, with the lowest form – a power of attorney (the lowest form of custody) – signed by a legal parent (Darlisha Stewart) who had under the law, she had a legal right to do that. There’s no violation of the law. If you don’t like how the law is and people don’t like how the law is, they should take it up with the legislature. But we followed the law.”