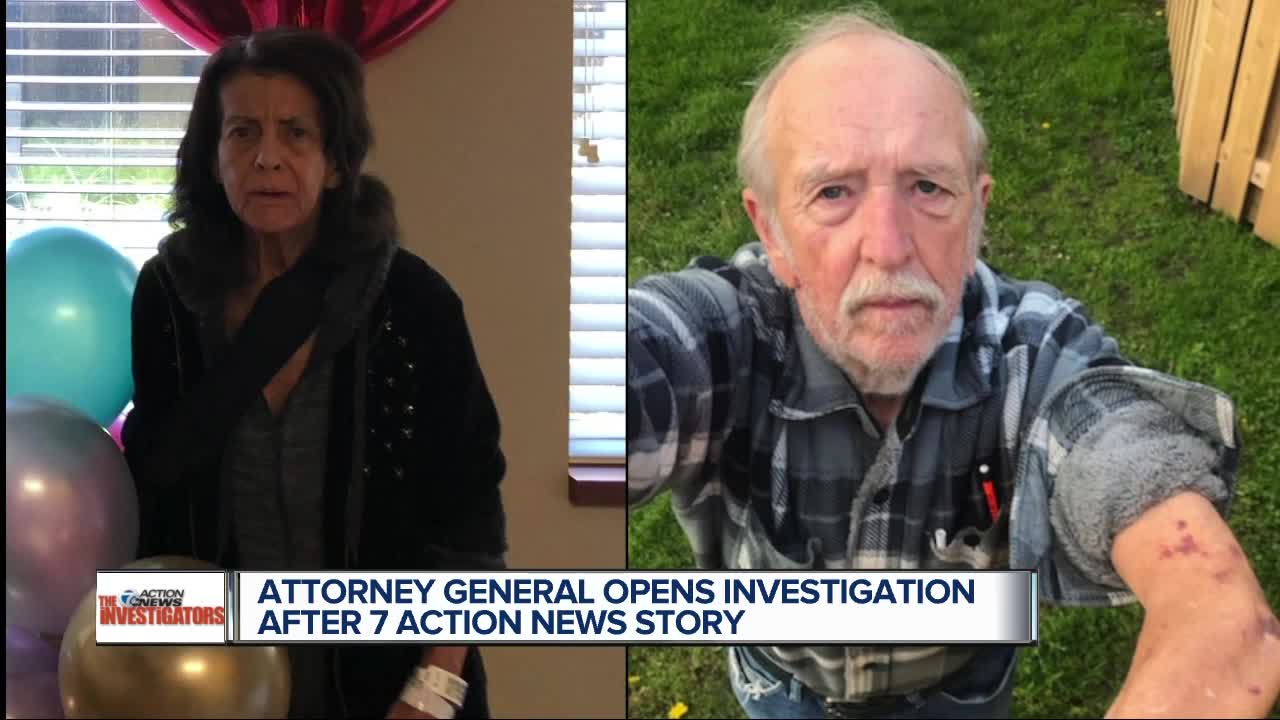 The Michigan Attorney General's Office has opened an investigation into a Macomb County probate case following a 7 Action News investigation. The 7 Investigators showed you that family members were questioning why Macomb Co. Probate Judge Kathryn George appointed Caring Hearts Michigan Inc. as guardians of an elderly couple instead of their family. 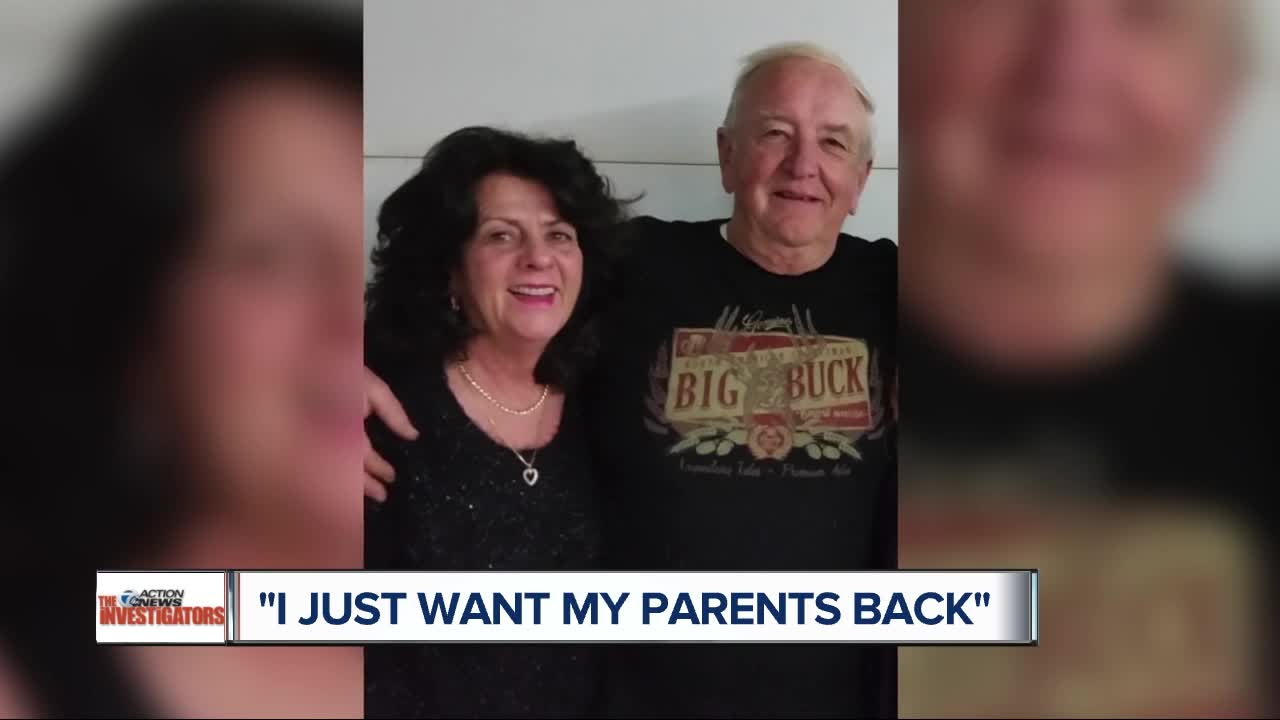 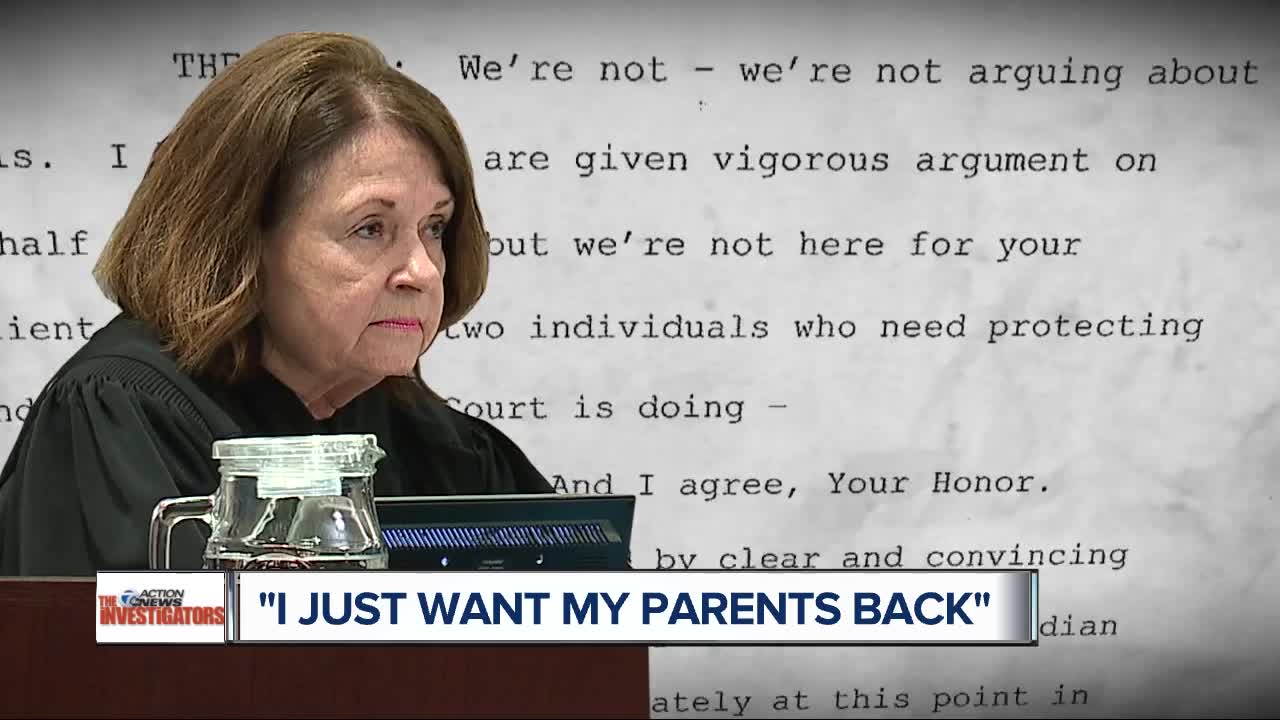 (WXYZ) — The Michigan Attorney General's Office has opened an investigation into a Macomb County probate case following a 7 Action News investigation. The 7 Investigators showed you that family members were questioning why Macomb Co. Probate Judge Kathryn George appointed Caring Hearts Michigan Inc. as guardians of an elderly couple instead of their family.

Related: 'I just want my parents back.' Woman says company imprisoned her parents in their own home
Related: Why did a Macomb County judge put strangers in charge of the elderly couple instead of the family?

In a joint statement, Michigan Supreme Court Justice Bridge McCormack and Macomb County Circuit and Probate courts Chief Judge James Biernat Jr. said, "Vulnerable Michigan residents and their families must have confidence that probate courts are following the law and taking appropriate steps to protect their rights. That’s why the Michigan Supreme Court is working with the Attorney General on the Elder Abuse Task Force to address concerns raised about the adult guardianship system.

“We have recently become aware of specific concerns regarding Macomb Probate Judge Kathryn George alleging that proper procedures are not being followed in her court and the rights of families are not being safeguarded. We commend the Attorney General who has already begun an investigation about these concerns and ask her to use the full powers of her office to examine how vulnerable adults are being treated.”

They issued a further update later in the day Friday saying "Chief Judge Biernat is reviewing Judge George’s docket and will be reassigning cases as necessary. A judge cannot be removed from the bench without a recommendation of the Judicial Tenure Commission."

“I just want my parents back. I want them to enjoy their retirement that they should have had, prior to this company taking over,” said Marcie Mitchell. Mitchell tried to become her dad and step-mom’s guardian last November because both were becoming mentally incapacitated.

“Is everyone in the family on board with Marcie being the guardian,” asked 7 Investigator Heather Catallo.

Mitchell said she hasn't seen her father or step-mom in more than a month. All she can do is wonder what's happening on the other side of the fence separating Barbara Elbridge and Bob Mitchell from their relatives who live right next door.

"They can't get out, we can't get in. They can't take phone calls because their landline's been disconnected. Their cell phones have been taken, their cars were towed away," Cousin Gretchen Sommer said. "They're literally prisoners in their own home, and they've done nothing wrong."

Family members say both Barb and Bob have been trying to reach them through a six-foot tall privacy fence their caregivers installed. But how did this happen?

Back in November, Marcie says 70-year-old Barb and 72-year-old Bob were having issues with memory and dementia. That prompted Marcie to petition the Macomb County Probate Court to become her parents’ guardian and conservator, so she could hire full-time caregivers and make medical decisions for her dad and step-mom.

But when Marcie appeared in front of Judge Kathryn George, she says the judge blindsided her when the judge appointed an outside company called Caring Hearts Michigan Inc. as guardian and conservator.

"I felt belittled like I didn’t properly take care of my parents when I always thought I had. I was dumbfounded,” said Mitchell.

“How did the judge make you feel?” Catallo asked.

Even though Michigan law gives Marcie priority to become a guardian to family members, Judge George told Marcie she had “grave concerns” about Bob and Barb. Instead, the judge handed their lives over to Caring Hearts Michigan Inc. and its owner, a woman named Cathy Kirk.

Marcie says Cathy Kirk promised she would stay involved in her parents care, but she’s no longer allowed to see them. Kirk hired another company that she owns, called Executive Care, to provide in-home caregivers 24 hours a day. Cathy is married to Robert Kirk, a Macomb County Public Administrator in the probate courts.

Both Robert Kirk and his law partner have donated money to Judge George’s campaigns in the past.

Just like Marcie can’t talk to her parents behind this fence, we couldn’t catch up with Cathy Kirk because she too lives behind a fence: a massive privacy gate walling off the Kirk’s large home from public access.

And the Mitchell relatives aren’t the only ones who say Caring Hearts Michigan has separated them from their loved ones.

Members of the Franklin family say Judge George also appointed Caring Hearts when they tried to get guardianship of their 89-year-old mother, Piera. Mrs. Franklin is now back with her son, but only after her family members say they were also prevented from seeing their mom.

This isn’t the first time questions have been raised about Judge George and a guardianship company.

According to an order from the Michigan Supreme Court, back in 2008, they removed Judge George as chief judge of the probate court over concerns about her “questionable overuse” of a different guardianship company she was appointing to cases.

A probate court spokesman says even though Judge George knows the Kirks “informally through political and bar association events… there is no business relationship” with them.

The spokesman also says the judge isn’t allowed to respond to our questions about past campaign contributions but says it’s, “not unusual for attorneys to support judges for re-election” and the past support has “nothing to do with the recent selection of Caring Hearts as a public/professional guardian.”

The family released this statement in relation to the AG investigation:

Our family could never fully express our appreciation for the Michigan Attorney General’s Office, Michigan Supreme Court Justice Bridge McCormack and Macomb County Circuit and Probate courts Chief Judge James Biernat, Jr. for opening an investigation regarding the unethical practices that are put into motion in Judge Kathryn George’s Courtroom. Our family also has the utmost respect and gratitude for Heather Catallo and her willingness to stand with us to shed light on a very dark and dirty secret that has been allowed to exist by leaving Judge Kathryn George on the bench. This is not the first time Judge George has been reprimanded and it is not the first time she has been removed, that must stop! As grateful as we are, the fact is that we are only starting the fight. Living through this process we have learned that there are many other families, just like ours, that are fighting for their loved ones, too. Families that have had their lives turned upside down by this court, this judge, all the attorney’s involved, as well as the businesses who have all financially benefitted by this Court’s decisions. Only you have not heard of them because they are/were scared to negatively affect their cases. Some families do not have the financial resources or time or ability to stand up to force the courts to do the right thing! This is not how a system protects our families. This is not okay. Why have you heard about Barb and Bob? Because we won’t back down. In spite of the threats and intimidation, we will not back down until our family is back together. Thankfully, we have an army of people behind us, an army willing to tell our story and an advocate in Heather Catallo and Channel 7. But, it’s not over until Barb and Bob are released from this circus. While we are grateful, the fight for OUR family, as well as others who currently have cases in front of Judge Kathryn George, Caring Hearts and their Attorney’s, are still in the arena. We will not stop until the public servants who are voted upon by the people with the promise of protecting us are held responsible for their actions. We are facing Caring Hearts, Executive Care, Kirk Law Firm and Judge George again in court on June 17, 2019 to fight a restraining order filed against us; another attempt to keep our family apart. Stand with us in court on June 17, 2019. Follow our Facebook page Justice for Barb and Bob for update. We are not scared of the truth!