'Think if it was your daughter.' Assault survivors plead for full funding of local DNA lab 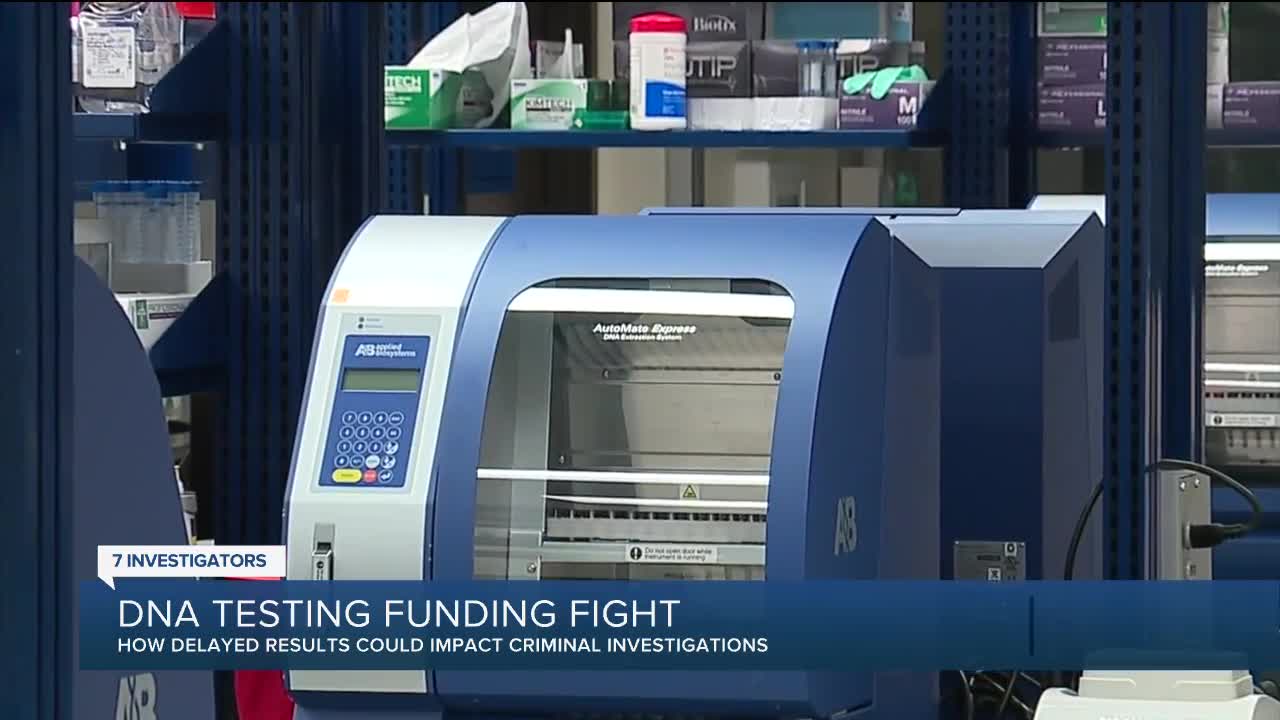 DNA testing can mean the difference between a killer or rapist getting locked up or walking free. (WXYZ) — DNA testing can mean the difference between a killer or rapist getting locked up or walking free.

Michigan only has two labs that are accredited to conduct DNA analysis, and officials at one of those labs say they’re not being given a fair share of the money that’s desperately needed to fight crime.

Sexual assault survivors know how crucial DNA evidence can be to put predators behind bars.

“It was honestly the hardest thing I’ve ever had to deal with in my entire life,” said 20-year-old Mariah, who was assaulted in Pontiac in 2018. “It was very important with our case, and it turned into a serial rape case, instead of just one occurrence, which allowed him to get more jail time, and not walk free preying on these other young girls.”

The ability to expedite DNA evidence processing is essential. That’s in part what helped detectives in Oakland County make an arrest in the murder of high-profile poker player Susie Zhao last month.

“That allowed us to initiate the authorization of a warrant and take someone off the streets that is potentially very, very dangerous,” said Oakland County Chief Assistant Prosecutor Paul Walton.

Blood stains, hair, and fibers from the Zhao case were all analyzed inside the Forensic Science Lab at the Oakland County Sheriff’s Office.

“It’s so essential,” said McCabe. “It’s a tool that police agencies have to have… We’re here to assist whoever we can assist. We assist the city of Warren, we do their drug cases for them, we do DNA for them. The Macomb County Sheriff’s Office, the St. Clair County Sheriff’s office, and departments in western Wayne County.”

The Oakland County lab serves nearly 1.3 million people and 43 police agencies. It’s one of just two accredited labs in the state of Michigan.

Michigan State Police run the other larger lab (their main Forensic Science Lab is in Lansing, with six additional labs throughout the state). Both MSP and the Oakland County Sheriff’s Office qualify for special funding through a grant from the U.S. Department of Justice’s Bureau of Justice Assistance. It’s called the DNA Capacity Enhancement for Backlog Reduction (CEBR) Program, and it’s designed to alleviate DNA testing case backlogs.

“We’re the only two that are eligible for the grant money. Last year, when we applied, we worked out an agreement with the state,” said McCabe.

But McCabe says that never happened, even after the Oakland County Sheriff sent a letter to Michigan State Police Colonel Joseph Gasper back in May.

“Unfortunately, we didn’t hear anything back for about 6 or 7 weeks,” said McCabe.

McCabe says just days before the grant applications were due, MSP told them they could not have more than a $250,000 baseline amount this year – a loss of $154,566.

“If we lose this money, we’ll have to eliminate two positions and the backlog will just get larger,” said McCabe.

“How devastating would that be,” asked 7 Investigator Heather Catallo.

“Devastating to the victims of crimes: the homicides, the criminal sexual conduct, the assaults. It would be very devastating. Where are the local police chiefs going to go? If they go to the state police, their backlog is larger than ours,” said McCabe.

Right now, the state police website lists their average DNA turnaround at about 74 days, or 2 ½ months, but prosecutors say it’s usually much longer.

“We’re still at about a 6-8 month time period to get DNA testing done,” said Walton.

Prosecutors say reducing Oakland County’s ability to process DNA will only add to the state’s backlog, especially once trials delayed due to the pandemic resume.

“How would you sum up this decision by the state police,” asked Catallo.

“Shortsighted,” said Walton. “Imagine when all these cases come online, how busy the state police are going to be. Those scientists are going to be expected to be in 3 and 4 counties at one time [for court cases], plus they’re going to have new cases that are coming in for DNA testing.”

The Michigan State Police would not talk to us on camera, but did release a statement explaining that they are using a different formula this year to divvy up the grant money. Their Forensic Science Division Director said:

“The US Department of Justice - Bureau of Justice Assistance (BJA) has supported government forensic DNA laboratories through disbursement of grant funds to increase capacity and reduce backlogs for nearly 20 years. If there is more than one eligible laboratory within a state, the BJA suggests the funds be allocated based on the crime rate and population served. Additionally, the BJA suggests, but does not require, that each applicant receive a minimum of $250,000 in grant funding, even if the crime rate and population served does not support that funding level. Using this model for FY2020, the Oakland County Sheriff’s Office (OCSO) qualified for grant funds totaling $185,807; however, following the BJA’s recommendation, the MSP intends to grant $250,000 to the OCSO.

In FY2019, the first year in which the OCSO applied for this grant, they were granted $404,566, but this funding level was not supported by the allocation model described above. The proposed reduction in funding is largely attributed to the application of the $250,000 as a minimum funding level, rather than applying it as a baseline funding level prior to considering the population served and crime rates in each service area.

In making this decision, the Michigan State Police has evaluated a number of contributing factors (e.g. number of staff members, cases completed, sexual assault kits submitted for testing and DNA services provided) and is confident that the proposed share of funding for the OCSO is in the best interest of serving the entire state of Michigan.”

But survivors like Mariah say cutting any of the funding will only hurt the crime victims.

“Think about if it was your daughter, or your sister. And they needed to get DNA testing in order to put a man away in jail that did something very bad to them,” said Mariah.

The Oakland County Board of Commissioners passed a resolution urging the MSP to reconsider their position, and then sent the resolution to the Governor and state legislature.

Both agencies will find out how much money they’re getting from the feds at the end of the month.

If you have a story for Heather Catallo, please email her at hcatallo@wxyz.com