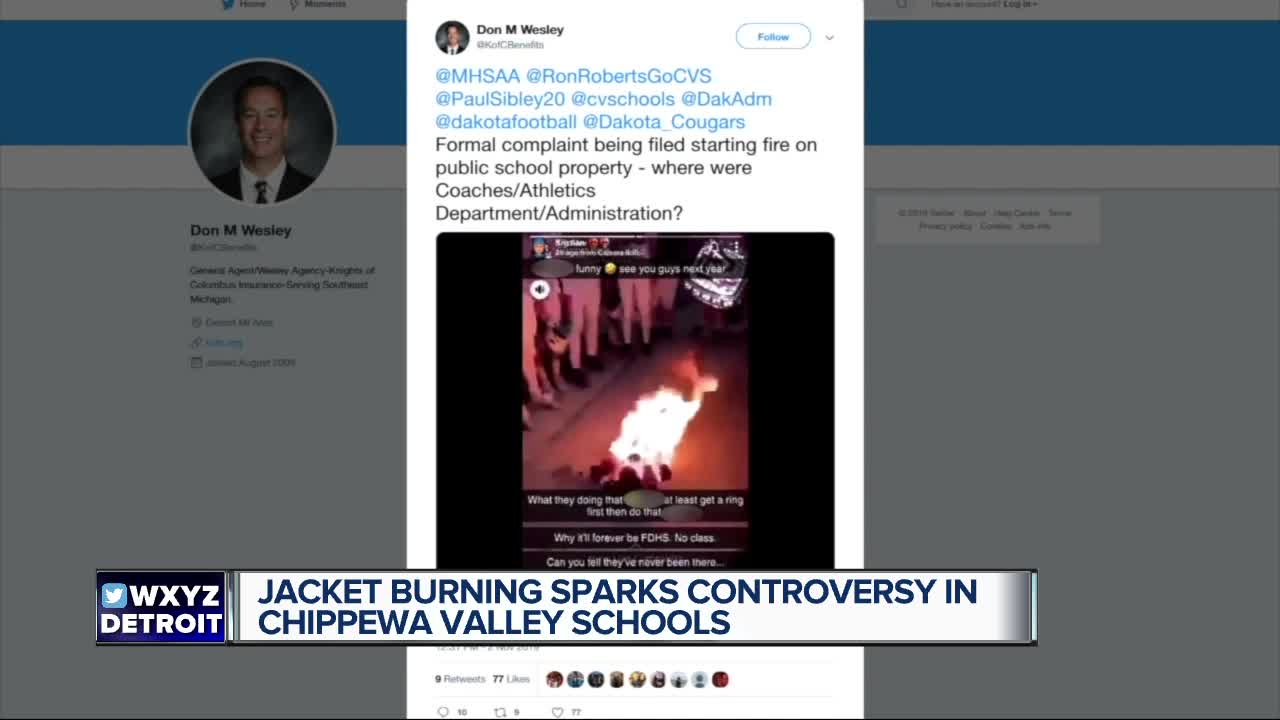 A Macomb County Dakota High School dad is apologizing to the school for an incident after his son's team beat his alma mater, Chippewa Valley High School where he played and was the team captain in the late 1980s.

MACOMB TOWNSHIP, Mich. (WXYZ) — A Macomb County Dakota High School dad is apologizing to the school for an incident after his son's team beat his alma mater, Chippewa Valley High School, where he played and was the team captain in the late 1980s.

He says he did it to show support for his son and teammates. The dad, who doesn't want to be named, says he set a poor example and takes full responsibility.

After the game on Nov. 1, when the team had returned to their school he put his Chippewa Valley varsity jacket on the ground and set it on fire.

He wrote in a letter to the coach and team, "I got caught up in my excitement and through this would be funny or motivating to the players. Shame on me."

Dakota upset Chippewa Valley 34-13 in the game. The Dakota High School coach was suspended before the next playoff game with Sterling Heights Stevenson and lost 38-35 on Nov. 8.

The coach was told he did not do enough to protect his players. There's no indication the coach or the players had anything to do with the incident.

The dad has been banned from school events for a year. As of now this includes his son's graduation. However, school officials say he can request to attend graduation and they would grant his request..

Dear Mr. Demorest, I am writing to apologize for my actions last night that were solely my own. As a parent I got excited and regret that I got caught up in my own passion and made a mistake by burning my varsity jacket. I set a bad example and I apologize.

The property that was destroyed was my personal Chippewa Valley Varsity jacket from 1989, and no one else’s. As an alumni of Chippewa Valley and a parent at Dakota, I feel deeply about both schools and regret my inappropriate behavior.

No coach or player in either school had any knowledge that this was going to happen. This was not something that I planned to do. I got caught up in my excitement and thought this would be funny or motivating to the players. Shame on me. I now realize my poor judgement and deeply regret my actions. No one else was involved in the planning or executing of this.

I realize I set a poor example for both teams and those watching. I didn’t realize that this was being videotaped and would spread like it has. I take full responsibility.

In closing, I ask that any penalty for my actions rest solely upon my shoulders. Whether that be a fine, a ban from future games, community service towards the schools, a public apology or another consequence I am willing to accept that. I am happy to serve my penance in the interest of good sportsmanship. Please make me take responsibility for it and not affect the coaches or players, as this was single handedly my own actions and I am prepared to accept any consequence you deem necessary.

Superintendent Ron Roberts tells 7 Action News the coach was suspended for one game because he did not keep the students safe.

"All that needed to happen that night is move the kids away from that fire and call 911. The coat was burned with an accelerant. Students were encouraged to stand around by this person - the person burning the coat," Roberts said.

Mike Hall started an online petition and says parents and students from Chippewa Valley have been fanning the flames in social media posts.

"Our kids were called horrible names, drug addicts, poor sports you can’t even imagine. And it continues today."

The Superintendent says in response, "We have approached people and asked them please take things down."

Roberts also says there will be no further action taken against coaches. No action was taken against students. He has called police about the incident.

The Dakota parents would like a meeting with board members as early as tomorrow.