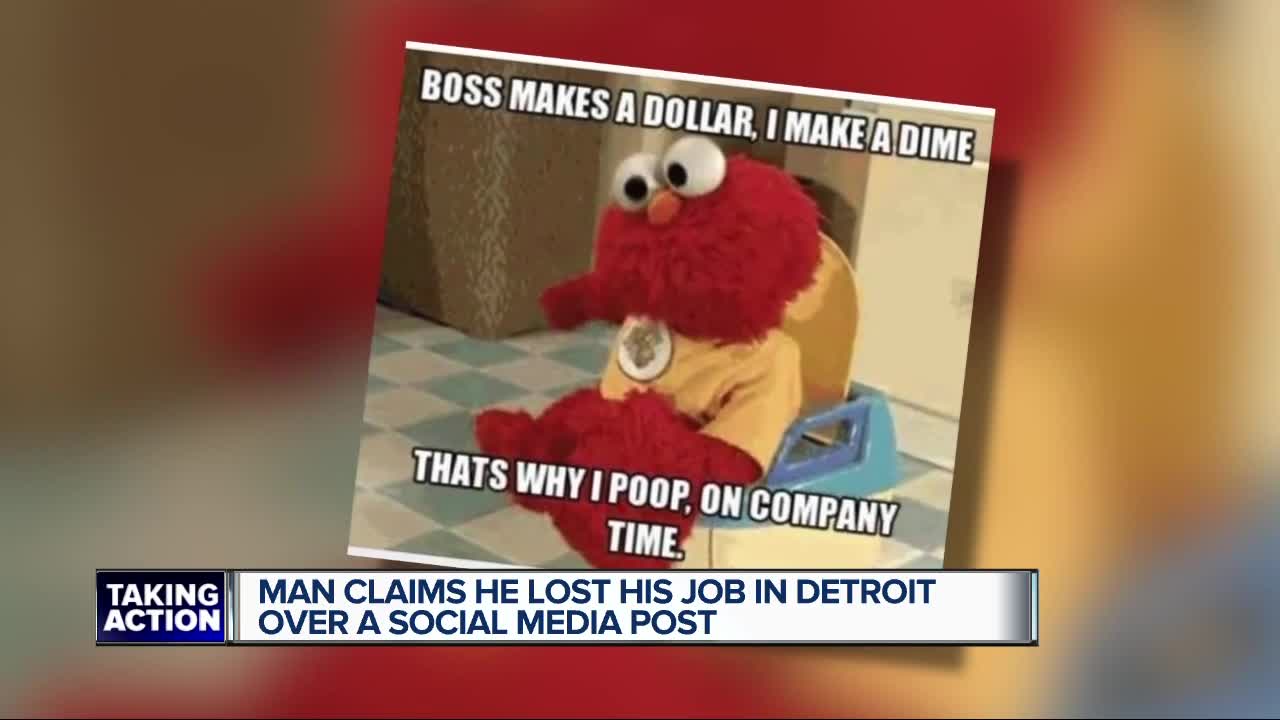 We’ve heard stories about people getting fired for inappropriate posts on social media. But is that what happen to an employee of a stone company in Detroit?

(WXYZ) — We’ve heard stories about people getting fired for inappropriate posts on social media. But is that what happened to an employee of a stone company in Detroit?

The meme was a photo of Elmo on a potty with the words, “Boss makes a dollar, I make a dime. That’s why I poop on company time.”

“I found the meme on one of my friend’s pages and I shared it,” Hidalgo said.

The 23-year-old posted the meme on Facebook Sunday, Oct. 20.

“I share things that are funny all the time,” Hidalgo said.

A couple hours later, he got a profanity-laced message from his manager at Roman Stone Works.

We’ve heard stories about people getting fired for inappropriate posts on social media.

But is that what happen to an employee of a stone company?

We spoke to him exclusively and he says he lost his job after sharing a meme on Facebook. pic.twitter.com/bgfi6N4XJ2

It said in part, “We don’t make a dollar when you are s****ing all the time. Why don’t you stay home and do your ****. I don’t like to play your bull**** games, maybe there is a company out there that will put up with your games because I won’t. Good luck.”

Hidalgo then asked if he was fired from the job he worked less than two months, but didn’t get a response.

“Oh he probably thought this was about me working there,” he speculated.

Hidalgo then posted the meme and conversation saying he was fired over text. That post has been shared more than 8,000 times.

We wanted to get to the bottom of this story so we went to Roman Stone Works on Detroit’s west side. They said employees should be mindful on social media but they tell us Hidalgo was not fired.

In fact, he worked two days after the post and walked off the job on his own last Wednesday.

Hidalgo confirms that happened, saying he went in after the text message because he wasn’t entirely sure he was fired. However, after a couple of days back he quit.

“With the bad blood, I didn’t want to work there anymore,” he said.

We talked to the lawyer representing Roman Stone Works who says the company’s owners have now been receiving death threats at work and home. They say this backlash is unfair, especially when Hidalgo quit on his own.

"Cody Hidalgo, as a short-term employee of Roman Stoneworks, has engaged in a social media campaign with false claims that are verifiably untrue. This individual was not terminated because of a meme posted on Facebook on Sunday, October 20. After the posting of that meme, he worked the following Monday, Tuesday and part of Wednesday. Mr. Hidalgo actually walked off the job on Wednesday, October 23 of his own volition, and over his manager's objection. Roman Stoneworks and its officers desired to keep Mr. Hidalgo in its employment to perform his duties. He abandoned a job in progress and that was how his employment with Roman Stoneworks actually came to an end.

Unfortunately this individual, who was employed for less than 2 months, is now seeking to exploit the publicity that this false claim has created. He has started a Gofundme page to attempt to capitalize on his newfound exposure. Meanwhile, Roman Stoneworks and its owner and personnel have been subjected to significant monetary damage, as well as threats, profanity and harassment by phone and email. Due to the backlash from these false claims, my client's webpage has had to be removed, and the individuals involved have been inundated with calls and emails.

If Mr. Hidalgo chose to tell the truth to all of the people who have now heard his false claims, then the matter may be able to be resolved amicably. Unfortunately this does not appear to be the route chosen by this individual. My clients have needlessly suffered based on these allegations."

“I never meant for people to blow it up like that or spam their company or defame their name,” Hidalgo explained.

Hidalgo is now waiting to hear if he will get a new job after an interview.

“Watch what you share sometimes because it could get you in trouble. It can look bad on you,” Hidalgo added.