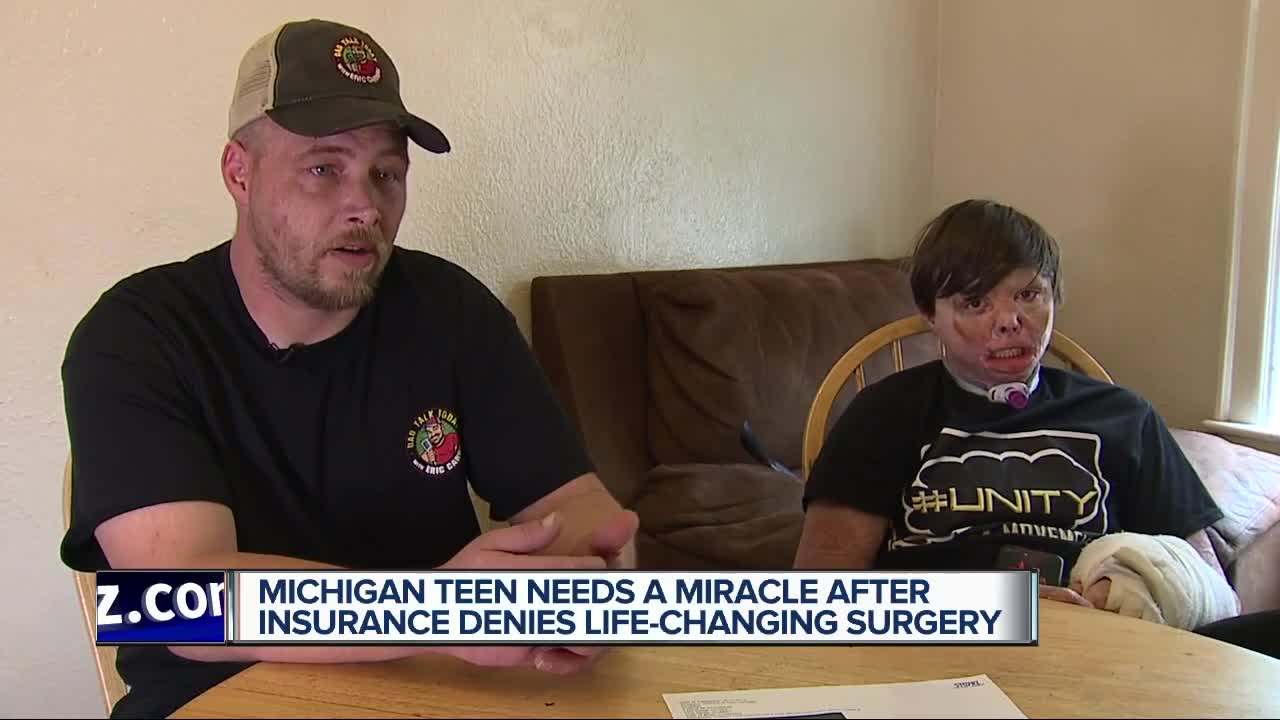 As he celebrates Thanksgiving, Robert Adams knows what he is thankful for. His son is alive. “Because he was less than 5% chance of survival,” said Robert Adams.

DETROIT, Michigan (WXYZ) — As he celebrates Thanksgiving, Robert Adams knows what he is thankful for – that his son is alive.

“Because he was less than 5% chance of survival,” Robert said.

Two and a half years ago, Robert's son Brian was in a hotel room with his mom in northern Michigan as his dad fought for custody. She is now in prison because as she used butane hash oil to process marijuana she caused an explosion, burning 85% of her son’s body.

Burn units at hospitals around Michigan said his injuries were too severe. Robert says they didn’t want to admit him and recommended the family just work to ease Brian’s pain. The Shriners Hospital for Children in Boston however thought he had a chance, and saved his life.

“He is an inspiration," Robert said. "He just had surgery on Friday and he is already off the pain medications."

Because Brian has a tracheostomy, he needs his dad with him around the clock in case he has trouble breathing. His father has had to put his career on hold.

“The only priority I am focused on is my son’s airway," Robert said. "Right now my roof is leaking. My kitchen ceiling collapsed. All this crazy stuff is going on. None of that even matters."

“That is the size of my actual airway,” said Brian, pointing to an image of his airway. “It usually that big and it is smaller than a pencil head.”

Shriners Hospitals for Children-Boston has covered all of his care, but says it needs to bring in an outside expert that would cost about $150,000 to give him a surgery that would open his airway. If he doesn’t get the operation, at any time scar tissue could close it completely. That would permanently take away his ability to speak.

Brian's insurance company was asked to cover that. However, Molina Healthcare repeatedly denied coverage, advising the family there are doctors who can do the procedure in Michigan and in network.

Look behind the scenes: After I stumbled on my words, and then attempted retakes- Brian Adams, 16, from Detroit couldn't help but laugh at me again and again! 🤣But his story is serious. I will tell you how you can help him preserve his ability to speak on @wxyzdetroit at 6. pic.twitter.com/BkzKd39nII

Robert says doctors here in Michigan told them they could do the procedure, but they aren’t optimistic it would help preserve his son's voice. The doctor recommended by Shriners Hospitals told them he is confident he can preserve Brian's ability to speak.

“It is important. I like playing with him. I like playing games. He is my brother and I want to hear him talk,” said Damien Adams, 11, of why he thinks insurance should cover his brother’s procedure.

“He fought so hard and I owe him this procedure," Robert said. "The kid has had a rough life."

Doctors have told the family the situation is urgent. They have already challenged the insurance company and received more denials. They have started a fundraising account to raise money for the surgery on their own.

You can donate here.

7 Action News reached out to Molina Healthcare for comment, but as of deadline no comment was provided.