Millions of gallons of sewage dumped into Rouge River 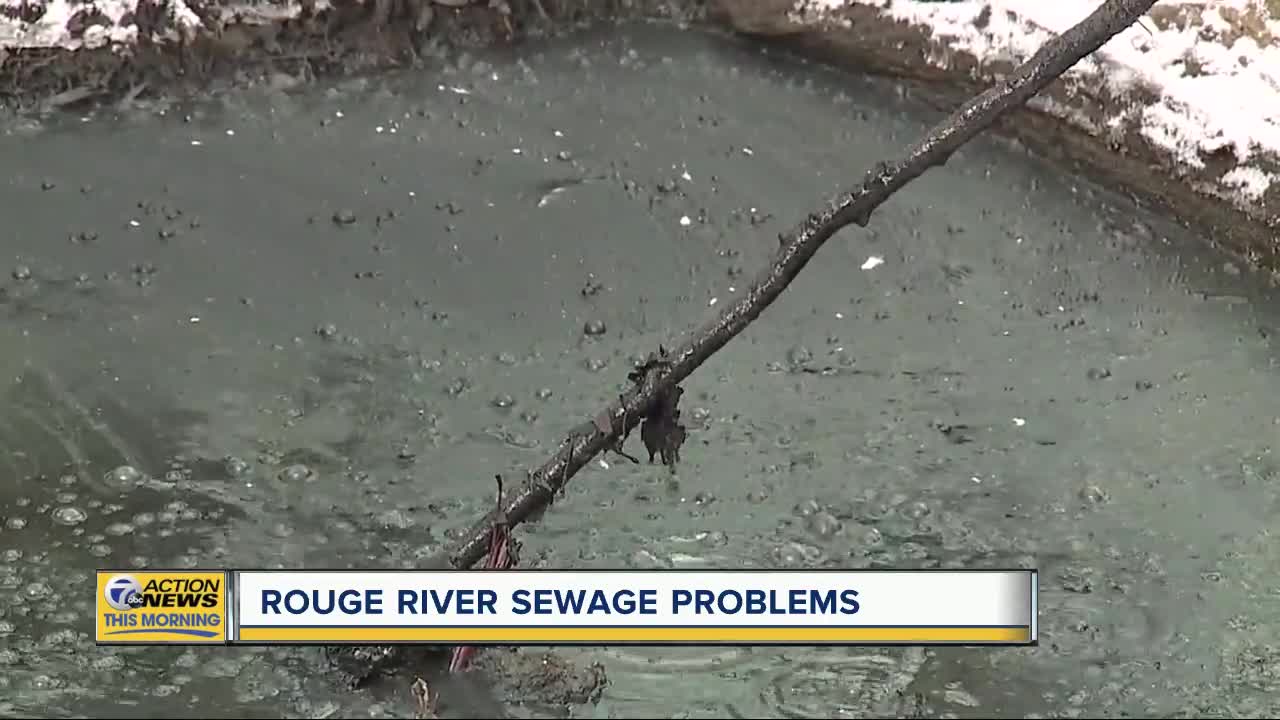 In the past month, millions of gallons of sewage have made it into the Rouge River and it's likely to happen again.

(WXYZ) — You may not know it, but as a state we regularly dump partially treated sewage into our streams, rivers and lakes. In fact, it’s so commonplace — you likely didn’t hear about the 2-plus million gallons dumped into various parts of the lower and middle Rouge River in late February, or the more than 6 million dumped less than two weeks ago during a major water event.

Sewage has been a regular addition to Michigan waters dating back decades, and while improvements are being made, the practice will likely continue until 2025. That’s when the state requires most municipalities controlling what’s known as a “combined sewer systems” to have a solution to the problem.

“There’s still a lot of work to be done, but there’s been a lot of progress in the past 25 years,” said Dan Beauchamp, who works in the Michigan Department of Environmental Quality’s water resource division.

He’s got a point, too. While hearing about millions of gallons of sewage flowing into our rivers while we advertise a “Pure Michigan,” the reality is that more than $2 billion has been invested in projects that have cut down on the number of sewage overflows in the past two decades. Some were scheduled to be finished more quickly, but the recession forced municipalities to kick the can in some areas.

The issue boils down to an antiquated sewer system in a number of Michigan communities. Combined sewer systems collect not only the water you flush down the toilet, and your drains, but also everything that runs into storm drains throughout your neighborhood.

That means all that water is treated, but it doesn’t always work. In late February, snow melt flooded the storm drains in Wayne County that caused more than 1.2 million gallons of diluted sewage to dump directly into the Rouge River at an outflow near Michigan Avenue and Beech Daly in Dearborn Heights. When 7 Action News visited the area a few days later, the entire area smelled like a toilet, and the flow into the river could be seen — it was noticeably dark and appeared like a sludge. You could see the difference of where the affected water was, and where it met the free-flowing river.

“Unfortunately, that’s what it looks like,” said Beauchamp, as we showed him a photo of a dark black muck flowing into the Rouge River. “It’s dilute raw sewage, but you see it’s dark. You can see the plume. This is exactly what needs to be fixed, right?”

It’s not like there are not success stories. If you drive a few miles away, there’s a giant wetlands that has been developed that can take on millions of gallons of water when major water events occur.

Perhaps one of the biggest success stories will be unveiled in the coming weeks, Beauchamp said the Great Lakes Water Authority is preparing to unveil a project that would cut down on nearly 10 billion gallons of raw sewage that would otherwise be pumped into fresh water.

“Where your waste goes impacts you directly in the full circle,” explains Marie McCormick, Executive Director of Friends of the Rouge. “How healthy is that for a human to ingest? Just imagine all the other wildlife in the river. Living in that, growing in that — it’s detrimental.”

McCormick is quick to point out that her group has seen the continuing change along the Rouge River — years of projects aimed at cutting down sewage overflows has helped, but the work is far from done.

“It’s a problem and we need to address it,” said McCormick.

She said there are two parts to that problem — first, the work that needs to be done to reduce the number of sewage discharges, but a second, lesser thought about solution lies with everyone that lives in the area: simply putting less water into an overtaxed system.

Though it seems simplistic, McCormick notes that something as simple as planting a rain garden that absorbs water in your yard can cut down on the amount of water that flows into the sewer system; which in turn takes stress off the system. Every bit of water you take out of the system leaves room for the sewage that is in the treatment system.

“It’s important because it affects your drinking water,” said McCormick. “As this flows downriver, it meets the Detroit River, and that’s where we have intakes for the Great Lakes Water Authority. That drinking water is directly affected by how we treat our streams and rivers.”

In the meantime, the state is working with municipalities to come up with fixes — but there’s no fines or punishment for cities and counties as long as they have a plan in place to fix the sewage discharge problem.

In Michigan, there are typically two courses of action: separate the storm drain system from the sewers, or build retention basins that take on overflow during high water events — both come with high price tags that contribute to high water bills. Beauchamp noted that a number of projects were pushed back a few years ago because the recession made it difficult to set aside money for projects.

“We’d like to see their outfall eliminated, but we realize there is an affordability piece that goes into repaying high costs for infrastructure,” said Beauchamp.