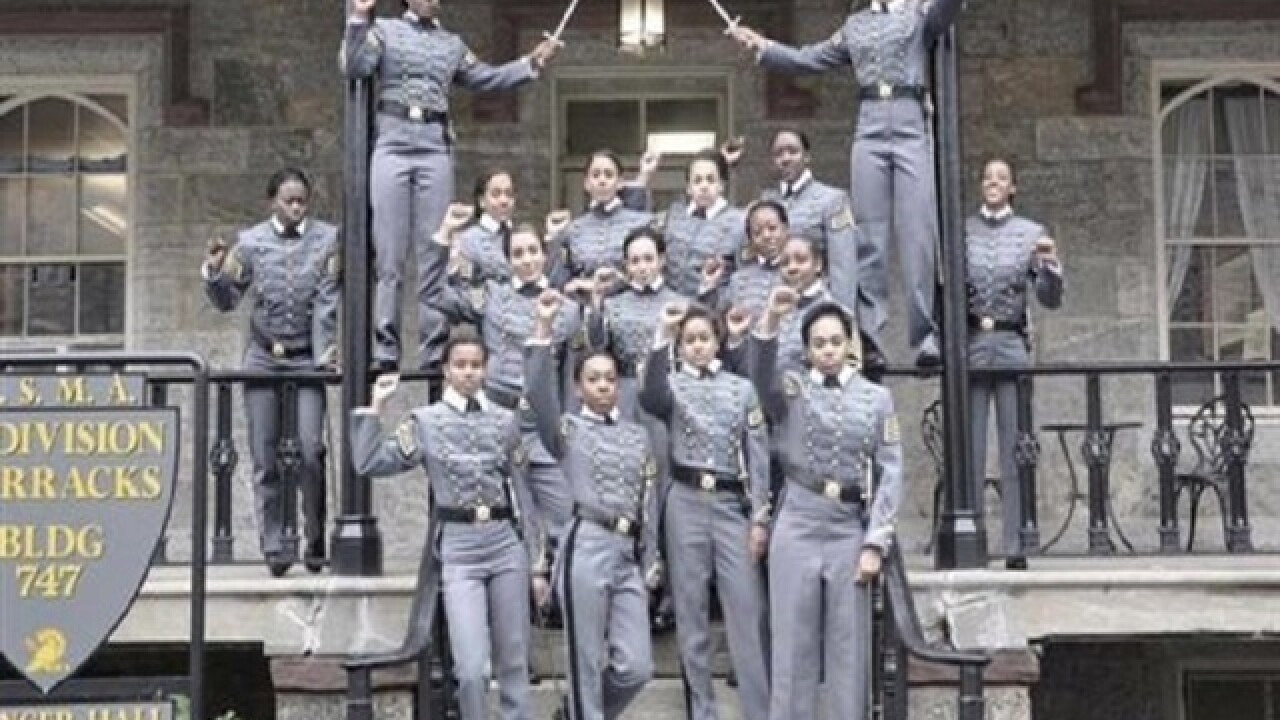 <p>FILE- This undated file image obtained from Twitter on Saturday, May 7, 2016 shows 16 black, female cadets in uniform with their fists raised while posing for a photograph at the United States Military Academy at West Point, N.Y. The U.S. Military Academy said Tuesday, May 10, that it concluded the group photo didn't violate any Department of Defense rules limiting political activity. (Obtained from Twitter via AP, FIle)</p>

NEW YORK (AP) — Sixteen black West Point cadets who posed with raised fists for a pre-graduation picture that sparked debates on race and proper behavior in uniform won't be punished for the gesture, the U.S. Military Academy said Tuesday.
The decision, less than two weeks before the 16 female seniors are poised to graduate, found they didn't violate military rules limiting political activity.
An internal inquiry found the cadets didn't plan to make a political statement, West Point's superintendent, Lt. Gen. Robert Caslen Jr., said in a letter to the student body.
But, he said, they showed "a lapse of awareness in how symbols and gestures can be misinterpreted and cause division," and they will receive instruction to address "their intent versus the impact of the photo."
The fists-up image, which circulated online, led some observers to question whether the women were expressing support for the Black Lives Matter movement, which grew out of protests over police killings of unarmed black men.
But the inquiry found the picture, among several the women made in keeping with an informal campus tradition, captured a spur-of-the-moment gesture intended to demonstrate unity and pride in graduating, Caslen wrote. Groups of cadets often take Old Corps pictures in traditional dress uniforms to echo historical portraits.
A raised fist has symbolized political resistance for generations, from Nelson Mandela upon his release from prison in 1990 to Democratic Vermont U.S. Sen. Bernie Sanders on the presidential campaign trail this year. It was used by black power advocates in the 1960s, including by two American sprinters during a medal ceremony at the 1968 Mexico City Olympic Games, and more recently by activists for the Black Lives Matter movement.
Some observers suggested the women were improperly identifying with the movement while in uniform.
Defenders said the women were simply celebrating their forthcoming graduation, something closer in spirit to a team lifting helmets to celebrate a win or Beyonce raising her fist at this year's Super Bowl halftime show.
"Their frame of reference is: 'Right now, we're getting ready to graduate in three weeks. I'm standing here with my sisters,'" said Mary Tobin, a 2003 West Point graduate and mentor who spoke to the students after the photo was taken in late April and to some of their relieved relatives Tuesday.
Some critics of West Point's inquiry said the black women, who represent less than 2 percent of the graduating class, were being held to a different standard than other cadets.
"Will there ever be a time when black women can unapologetically show that they are strong proud and supportive of one another without their action being interpreted as an act of militant defiance?" Essence magazine editor-in-chief Vanessa De Luca asked in a Wall Street Journal op-ed this week.
Indeed, Caslen noted that other cadets have used clenched fists to show support for a team or pride at serving their country. So did he, along with hundreds of West Point staffers and graduates on the night before last year's Army-Navy football game, he added.
The decision was politically fraught for West Point, which has been making a push to increase the number of women in the Long Gray Line. About 80 percent of cadets are men and about 70 percent are white. In all, there are 18 black women among the roughly 1,000 seniors on track to graduate May 21.
Associated Press 2016