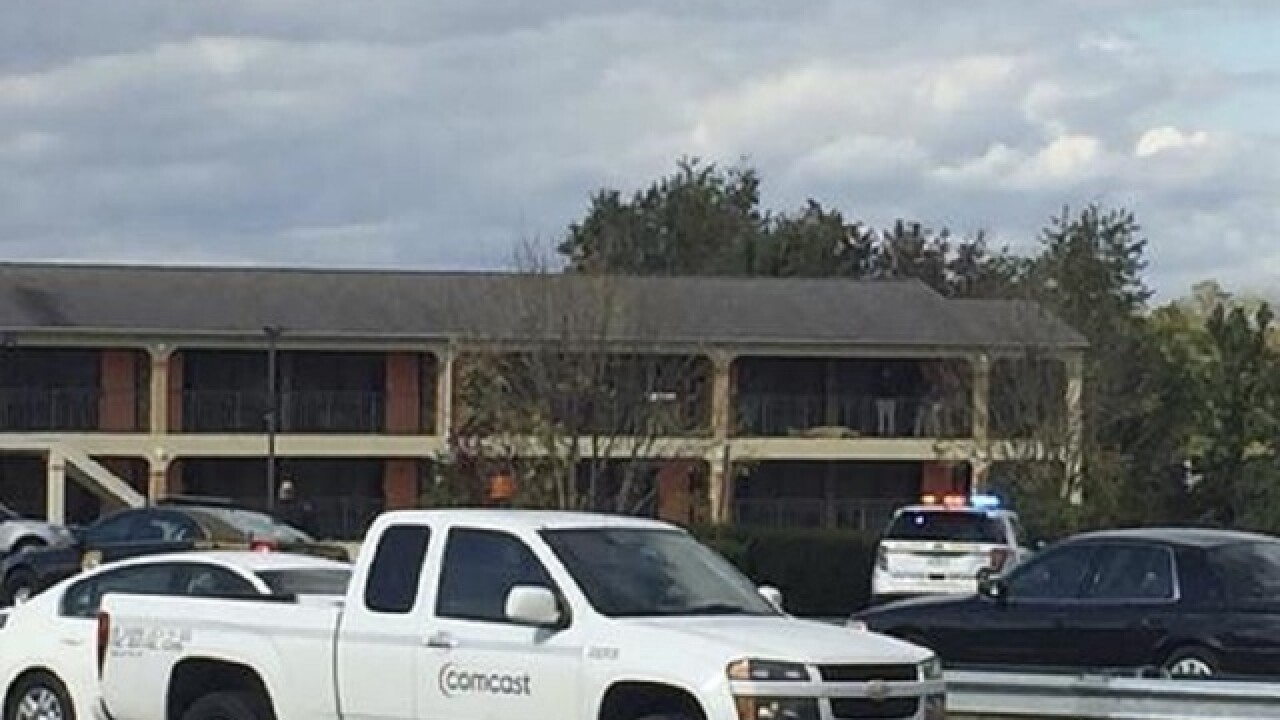 Juliet Linderman
<p>Authorities investigate the scene of a shooting in Elkton, Md. on Tuesday, Oct. 25, 2016. A Cecil County official says at least two people were hurt when gunfire broke out as Maryland State Police served a warrant at a motel. He says two people are injured near the room and officials believe a third person is inside the room. (AP Photo/Juliet Linderman)</p>

ELKTON, Md. (AP) — Several Maryland law enforcement officers are on administrative leave after two people sought by Delaware authorities on gun and drug charges were shot to death at a Cecil County motel.

Brandon Jones and Chelsea M. Porter, both 25, were shot Tuesday after they pointed what appeared to be handguns at officers trying to serve arrest warrants, according to authorities. Investigators said the weapons the two were holding turned out to be pellet guns.

Maryland State Police spokesman Greg Shipley said Tuesday that investigators were seeking to determine how many officers fired their weapons and from what jurisdictions.

A spokesman for the Elkton Police Department did not immediately return a telephone message Tuesday evening.

Officials said results of a state police homicide unit investigation will be provided to the Cecil County State's Attorney's Office for review. The Maryland State Police internal affairs unit is also conducting an investigation, as is standard in such incidents.

No officers were hurt during the confrontation at the New Eastern Inn in Elkton, a city of 15,000 about 45 miles northeast of Baltimore.

Delaware police said Jones was wanted in connection with a reckless endangering incident on Oct. 18 in which Jones fired a handgun into the air after threatening to shoot a person.

Detectives executed a search warrant on Oct. 21 at Jones' home, where they found more than an ounce of heroin, a kilogram of marijuana, a .22 caliber rifle, and three handguns, including a .357 caliber revolver stolen from a home in Chestertown. Authorities also seized more than $2,700 in suspected drug proceeds.

Shipley said Maryland authorities were able to track the couple to the motel.

Officers went to the motel around 10 a.m. Tuesday, knocked on the door of the second-floor room and announced themselves as police officers, Shipley said.

As they shouted at the room's occupants to surrender, one officer saw through a window that a man was approaching the door with a handgun, and the officers retreated, Shipley said. According to authorities Jones stepped outside the room onto the walkway several minutes later and pointed a gun at police, ignoring their commands to drop the weapon. Shipley said Jones raised the gun at officers and they fired.

Porter came out a few seconds later, raised a gun and also was shot after refusing to drop it, authorities said.

Porter and Jones were pronounced dead at the scene.