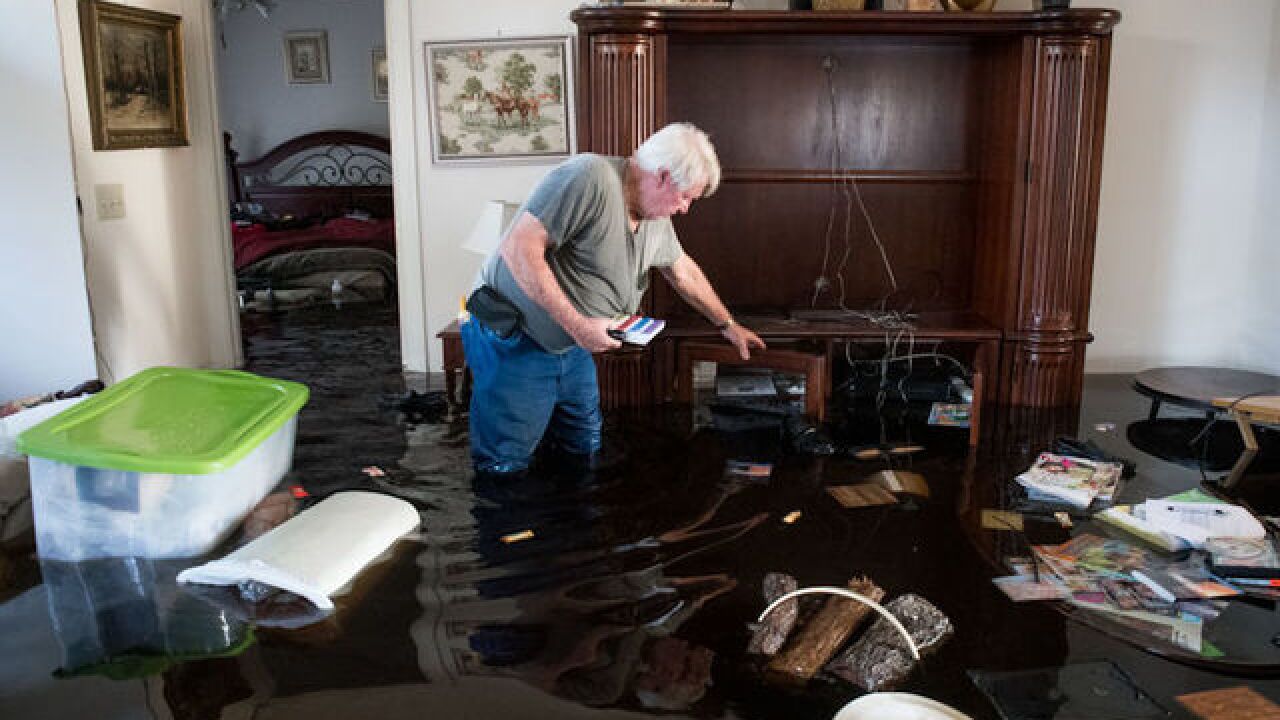 Image copyright 2018 Getty Images. All rights reserved. This material may not be published, broadcast, rewritten, or redistributed.
Sean Rayford
<p>Billy Hardee removes valuables from his home as floodwater caused by Hurricane Florence rises at Aberdeen Country Club on September 20, 2018 in Longs, South Carolina. Floodwaters are expected to rise through the weekend in the area. </p> 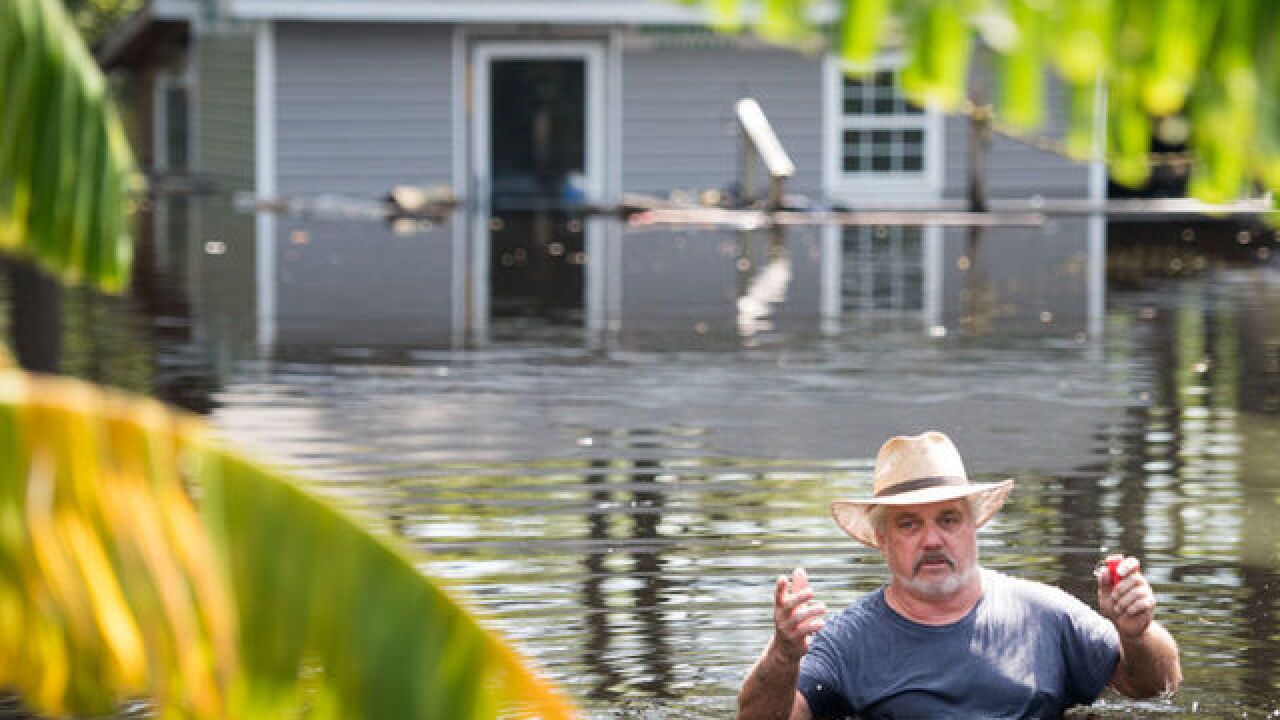 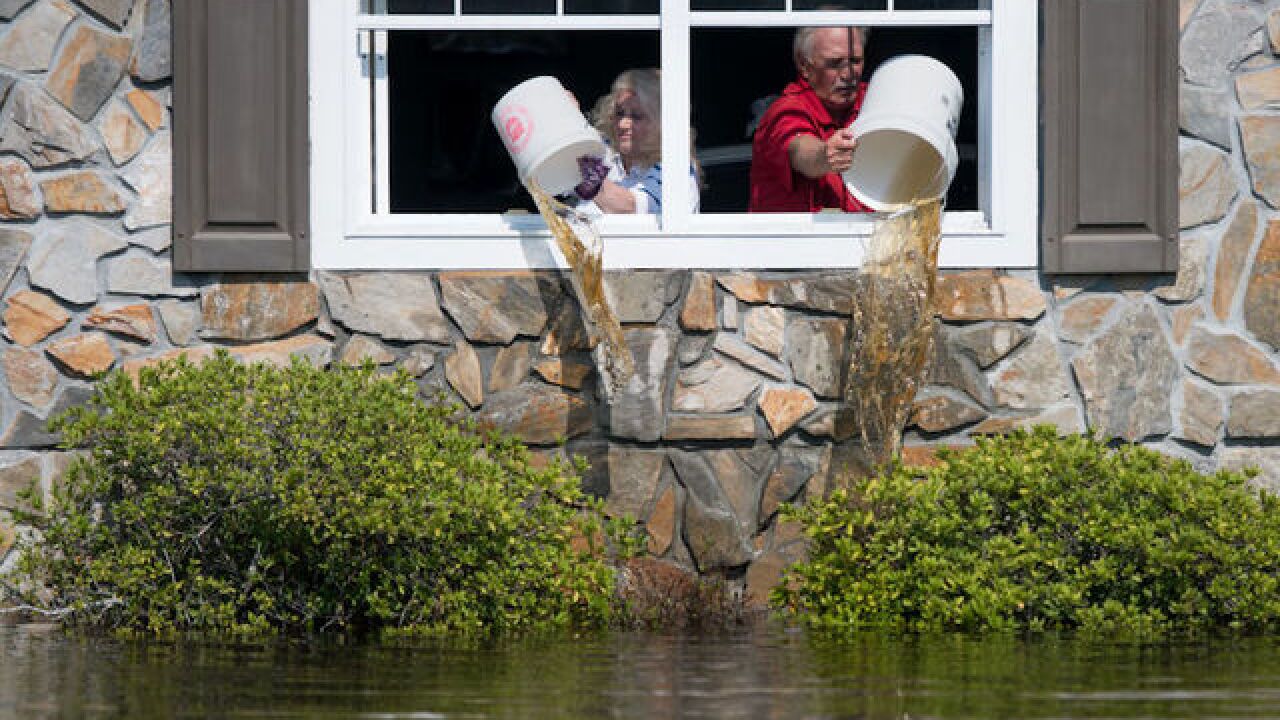 After an agonizing week of ravaging floodwaters, rising rivers, power outages and dozens of deaths, the Florence-weary Carolinas are facing the possibility of more flooding over the weekend.

At least 44 people have died since the hurricane slammed into the coast last week. While the rain subsided, some rivers are still rising, and North and South Carolina officials warn the flooding danger is far from over.

"The Cape Fear River will crest again this weekend, along with the Lumber River," the North Carolina Department of Transportation tweeted Friday, adding that the Neuse will rise Monday.

"Additionally, new areas are flooding with little warning. Due to this, travel isn't recommended south of US 64," it said.

While some roads are not flooded, they may have damage and hazardous debris that makes it dangerous to drive or walk on them, state officials said.

In South Carolina, emergency officials issued a stern warning on avoiding the roads: "I know we sound redundant, but it bears repeating: Turn around, don't drown!" the state's emergency management department tweeted.

A week after Hurricane Florence made landfall, the trillions of gallons of water it dumped over the Carolinas are slowly moving toward the sea and leaving a path of destruction behind. Residential streets have turned into rivers and freeways have morphed into waterways.

In North Carolina, flooded rivers have left thousands of evacuees living in shelters and hundreds of roads underwater.

The water has receded in some places, but as it moves downstream, officials say, thousands of people could be in danger until next week.

The South Carolina Emergency Management Division said Friday a number of rivers -- the Waccamaw, Lynches, Little Pee Dee and Big Pee Dee -- are forecast to crest east of Interstate 95 this weekend and early next week.

Residents were warned the confluence of the Big Pee Dee and Little Pee Dee rivers -- where they merge -- could reach flood levels even greater than those seen during Hurricane Matthew.

Authorities have said 23 out of the 46 counties in South Carolina could potentially be impacted by flooding.

In Conway, South Carolina, authorities said residents could see damage in homes that have not flooded before.

Officials are also worried about contamination and environmental hazards from the storm, including the potential effects of coal ash .

Coal ash is an industrial waste created by coal-burning power plants, and can carry health risks.

Flooding from the Cape Fear River caused breaches in a dam at a cooling lake at Duke Energy's LV Sutton Plant in Wilmington, North Carolina, prompting the company to shut down the natural gas plant Friday, Duke Energy said in a statement .

"Water is now exiting the cooling lake through breaches -- one large and several smaller -- on the southern end of the impoundment," the statement said.

It noted there are two coal ash basins on the site, but said there was "no visible ash in the cooling lake. A landfill containing disposed ash from the site has not been affected by the cooling lake, it said.

An earlier statement from Duke Energy explained the LV Sutton coal power plant was retired in 2013, and today the plant operates as a natural gas plant.

Most of the people died in North Carolina

Of the 44 people killed, three have been in Virginia, 32 in North Carolina and nine in South Carolina, officials said.