75 years of Mount Rushmore, a boon for tourism, creativity 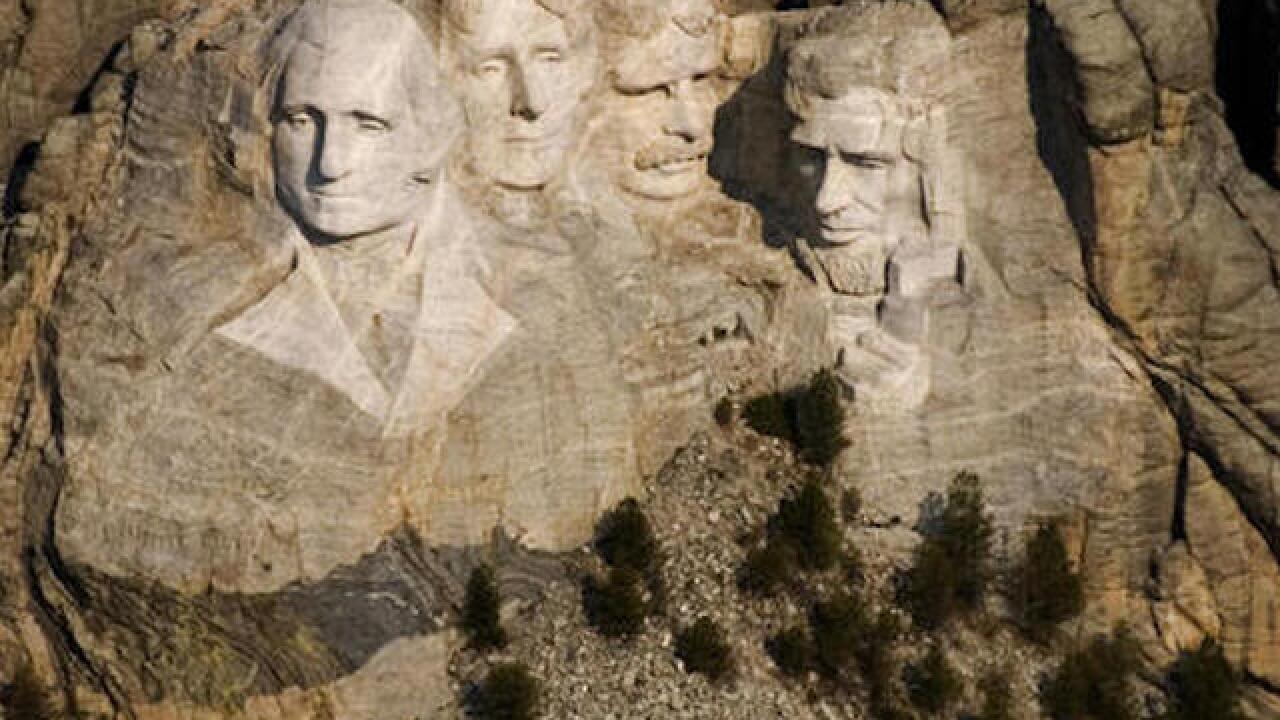 Mike Stewart
<p>FILE - This April 22, 2008, aerial file photo shows the Mount Rushmore National Memorial in the Black Hills near Keystone, S.D. In October 2016, the memorial that through the years has become the state's most famous attraction and draws about 3 million visitors a year will mark 75 years. (AP Photo/Mike Stewart, File)</p>

"In the vicinity of Harney Peak ... are opportunities for heroic sculpture of unusual character," South Dakota Department of History Superintendent Doane Robinson wrote to a sculptor in Georgia in 1924.

Next month, Mount Rushmore National Memorial marks 75 years of public pervasiveness, ending up in movies and comics and on quarter-dollar coins.

"Burglum told Robinson 'You are not thinking big enough. Western figures? That's not going to attract enough people. You need to think bigger,'" said Maureen McGee-Ballinger, the memorial's chief of interpretation and education.

Robinson was looking for ways to promote the state, particularly the Black Hills, McGee-Ballinger said. Plan B surely has served that purpose, with about 3 million people visiting every year.

"For the state, and the nation, Mount Rushmore is quite iconic," South Dakota State Historical Society Director Jay Vogt said. "It definitely put South Dakota on the map as a destination ... Because these are elected individuals on the mountain, who worked hard to preserve a nation whose creation was unique in and of itself, it really speaks to the idea that we are a country of free people."

Along the way, it has also found a place in pop culture. A chase scene in "North by Northwest," Alfred Hitchcock's 1959 classic starring Cary Grant and Eva Marie Saint, included a death-defying scramble over the presidents' faces.

"Alfred Hitchcock says he expects to realize his long ambition — filming a chase over the Mt. Rushmore Monument," The Associated Press reported in 1958. "He may be spoofing, but you never can tell with Hitchcock." Some scenes were filmed at the memorial, but the climbing of the faces were studio shots that used models of the mountain.

A 1983 special anniversary issue of the comic "Wonder Woman" features her face next to the stone Lincoln. T-shirts with the faces of superheroes instead of the presidents are available at Target and elsewhere. The memorial is a never-ending muse for political cartoonists, and in 2016, there's been no shortage of memes.

The memorial has also been featured in multiple coins, including a quarter issued by the U.S. Mint in 2013 that shows men adding the finishing details to Jefferson's face. The four faces have also been highlighted in postage stamps, and they are — of course — in the background of South Dakota's license plates.

To celebrate the milestone, the National Park Service held events during the summer in connection with its own 100th birthday.

The memorial should be lauded for several reasons, according to Debbie Ketel Speas, communications director for the nonprofit Mount Rushmore Society, especially its impact on the state's tourism industry and economic development, as well as the efforts of those who worked to make it a reality.

"When you look at what they achieved over 75 years ago, it's quite spectacular," she said.